Superlawyer recounts brush with Bofors, success of his London dream

The Bachchans, says Zaiwalla, approached him to get their defamation suit against the Swedish journal heard in an English court. 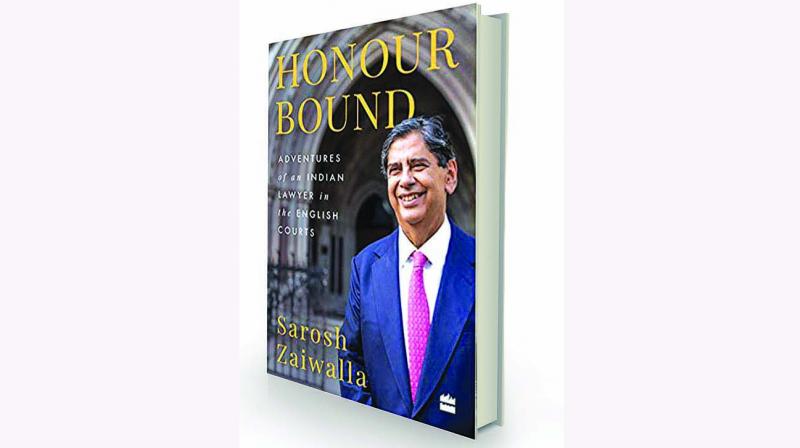 Honour Bound: Adventures of an Indian Lawyer in the English Courts by Sarosh Zaiwalla HarperCollins, Rs 699

As soon as the book reached my hands, I dived into the index looking for Madhavsinh Solanki, the former CM of Gujarat, who, as Narasimha Rao’s foreign minister, had been widely reported as receiving an envelope from the British-Indian lawyer, Sarosh Zaiwalla, to be passed on to the Swiss foreign minister.

I was disappointed to find that there were only two pages devoted to that extraordinary episode which had destroyed Solanki’s political career. It was soon evident why for Zaiwalla categorically asserts that he was not the “eminent lawyer” who passed on the letter. Indeed, he denies he ever met Solanki. And then hurls his own bombshell. Sourcing his information to journalist Vir Sanghvi, he claims that the only “eminent lawyer” who could have got on to the aeroplane ferrying Solanki to Geneva without being a co-passenger was high commissioner L.M. Singhvi availing of his diplomatic privilege that Zaiwalla, a mere lawyer, could never have secured for himself.

Solanki, now in retirement and nearing his birth centenary, has chosen to keep the details to himself and Singhvi has passed away. So, what the two pages
reveal are that Zaiwalla had nothing to do with the farce that turned into high political drama when the Swiss foreign minister revealed to the press the contents of the letter which sought the Swiss government’s assistance to close their investigation into the
payments allegedly made by Bofors into five different Swiss bank accounts.

If the 1992 incident earned Zaiwalla undesired and possibly undeserved notoriety, it was his association with the Bachchan brothers that earned him his Perry Mason-esque reputation as the top Indian lawyer practicing in the English courts. The story is recounted by the author with both verve and clarity. The Swedish newspaper, Dagens Nyheter, had claimed on information leaked by the Swedish investigating authorities that there was, in fact, a sixth account connected to the Bachchan brothers acting on behalf of (by then) former PM, Rajiv Gandhi.

But, in fact, the case never really came before an English court for on the opening day of the hearing, the Swedish newspaper and the representative of the Swedish investigating agency, publicly stated that they had been mislead as there was no sixth account; the Bachchans, had nothing to do with this non-existent account; and hence, by extension, the innuendo against Rajiv Gandhi was entirely misplaced. The matter was settled out of court for an undisclosed sum paid in damages. The case made Zaiwalla’s reputation — although his active role was confined to establishing his locus to argue a case that never came up for hearing by finding literally one copy of the Swedish newspaper available for sale in the UK!

What happens thereafter, in Zaiwalla’s telling, stains the Bachchans’ and, incidentally, Zaiwalla’s own name too. For Zaiwalla, purely on the basis of hearsay and without any evidence to sustain his tall tale, says Ajitabh suddenly offered him fifteen million dollars to invest in any enterprise chosen by Zaiwalla by way of expressing the Bachchans’ gratitude to him. Complex manoeuverings follow in consequence of which Zaiwalla says he never saw a penny of the Bachchans’ rich offerings while Ajitabh successfully plotted to take control of the whole venture. Initially, claims Zaiwalla, Ajitabh had said that this humongous sum of money was from Amitabh’s cinematic earnings, but later hinted that the money came from “New Delhi” which Zaiwalla took to mean the Congress Party. The only proof of this wild allegation that Zaiwalla offers is that when he told Sonia Gandhi of these Bachchan shenanigans she looked somber and two weeks later it was reported in the gossip columns that she had broken off all relations with the Bachchans. To set the record straight, relations had been fraught for nearly a decade.

When this matter came up at the formal launch of the book at the India International Centre, New Delhi, Zaiwalla said that, as a lawyer of long experience, he could determine by looking into the eyes of his interlocutor whether the interlocutor was or was not telling the truth, and when he had talked to Rajiv about Bofors, he came away convinced that Rajiv was telling the truth when he emphatically denied having anything to do with the alleged Bofors’ payoffs. In fact, despite the persistent efforts of nine years of non-Congress governments from V.P. Singh to Vajpayee III, no court has accepted that there was any wrongdoing on Rajiv’s part. Zaiwalla should have included this crucial conclusion in his book instead of leaving it as a casual comment at the book release.

For the rest, the book is an easy read and a stirring account of an Indian-origin lawyer correctly diagnosing that the only way for an immigrant of talent in the United Kingdom is to work his way to the top by remaining himself and asserting his identity as an India-born instead of becoming a “WOG” (for Westernised Oriental Gentleman). Other immigrant aspirants should heed this sound advice.