The skill is not just in the words or the device, it is also in the telling. 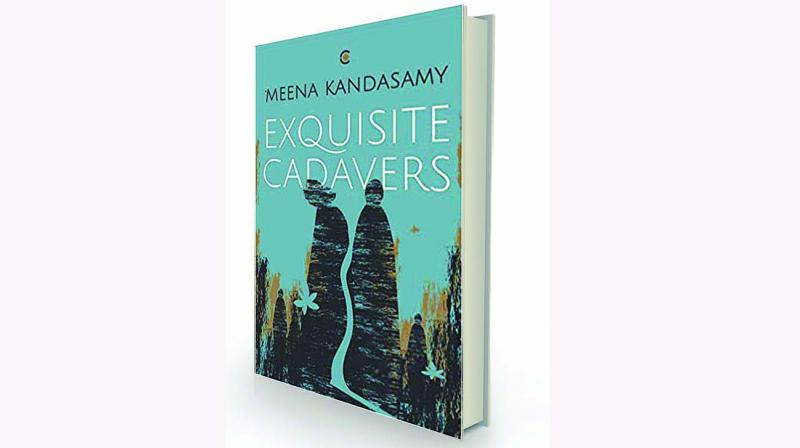 To write one story and make it readable is hard enough. But to write two in the same book? To have the two run parallel to each other, disconnected by storyline but connected by themes and ideas and happenings, not just by having a common writer, is not just craft — it is art.

Other than Italo Calvino I cannot recall such a device delivered with such masterful ease as Meena Kandasamy’s Exquisite Cadavers. The first thing that strikes you with Kandasamy, if you have not read her before, is that she a feather-light touch and yet complete control of her words. This novella, or two-stories-in-one or reflections on our times or history of recent horrors, is not long but it is complete, and it is packed with the most, to borrow her word, exquisite writing.

The story of Maya and Karim, of Karim and Maya is a story of marriage, a dissection of the married state, the examination of the inner workings of a relationship, the dance of longing and hostility, of likeness and disparity when any two beings try to become one.

Maya and Karim are a young couple in London. He is a film student from Tunisia struggling to find a subject for a film project which his university and today’s British society find acceptable. She is British, dealing with demons of insecurity from her past and the judgment of others about her present.

But what draws you in, immediately, is the parallel narrative. Of the writer telling you how and why she is writing this particular story, what the characters represent to her and what impact her writing has on her own life. And so you are held in thrall. By the lives of Kandasamy and Cedric and their baby, and the young love turmoil of Maya and Karim.

The skill is not just in the words or the device, it is also in the telling. You are drawn in lightly, maybe this is just another love story or two or the story of human foolishness and should you have succumbed to reading fiction instead of sticking to your non-fiction guns. But as you turn the pages, the big print and small both lead you into a larger world. The writer talks of her past, her violent abusive marriage, the plight of Sri Lankan Tamils, of Dalits as Karim struggles with his teachers who want to box and label him as Tunisian, Muslim, ethnic in a “nice” way but box him into their own convenient pigeonholes nonetheless.

Eventually, the small print story, the writer’s story becomes the story of today's India as she lives in London. Of the attacks on Muslims and Dalits, on everyone who does not fit in with the fascist vision of the BJP. She talks of attacks on women, of Brahmanism, of her friends jailed and murdered, of the India she left behind and the India piling on atrocities as she is far away. Maya and Karim struggle with their identities, with how others identify them. Of the prejudices and questions that a mixed marriage raises, even in this day and age.

Do not imagine for a second that the reins on the story are slack or that the two horses
run apart from each other.

You are so engrossed with both that sometimes you find your eyes fighting with each other as they switch from column to column, font size to font size. You might imagine that this is annoying. But instead, it is doubly engaging. Indeed, as one story ends a few pages before the other, you feel a bit bereft. Like you have been denied, an additional insight, some precious nugget that was owed to you.
If any book leaves you feeling like that at the end, what more could any reader ask for?