The Sky is Pink is an important film for many reasons — a must-watch! 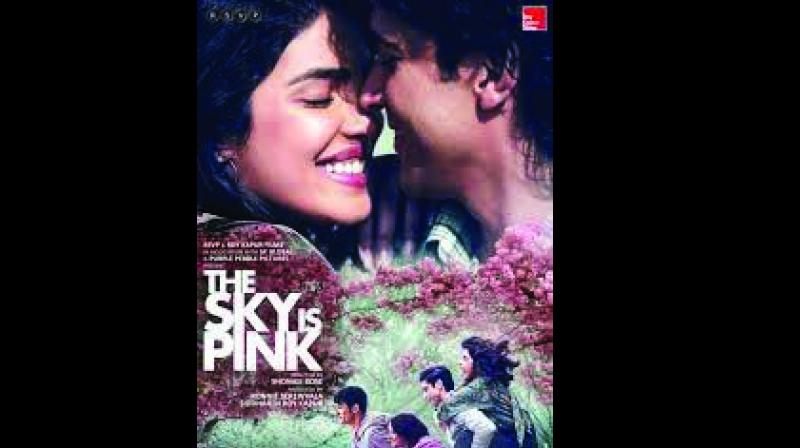 The re-jacketed cover has a still from the film, The Sky is Pink, and a slew of endorsements from celebrities such as Danny Boyle, Deepak Chopra, Shekhar Kapur, Shantanu Moitra, Virginia Holmes and others.

Our sweetest songs are those that tell of saddest thoughts,” wrote P.B. Shelley in ‘To a Skylark’. Writing about the inter-relationship of bereavement and the arts, both creatively and critically, is a hard task even at the best of times. Some of the most powerful examples in the creative arts have sprung from situations of bereavement and the hardest life situations. “My feet will want to walk to where you are sleeping / but / I shall go on living.” — Pablo Neruda. “Deep in earth my love is lying / And I must weep alone.” — Edgar Allan Poe. “Give sorrow words; the grief that does not speak knits up the o-er wrought heart and bids it break.” — William Shakespeare in Macbeth. “Death must be so beautiful. To lie in the soft brown earth, with the grasses waving above one’s head, and listen to silence. To have no yesterday, and no tomorrow. To forget time, to forget life, to be a peace.” — Oscar Wilde in The Canterville Ghost.

I  recently watched (twice on two consecutive days), Shonali Bose’s wonderfully moving new feature film, The Sky is Pink, based on the life of Aisha Chaudhary who succumbed to SCID (severe combined immune deficiency) and other related health setbacks, at the young age of 18 years. Priyanka Chopra (as ‘Moose’, the mother Aditi Chaudhary), Farhan Akhtar (as ‘Panda’, her father Niren Chaudhary), Zaira Wasim (as Aisha) and Rohit Suresh Saraf (as ‘Giraffe, her brother Ishaan Chaudhary) played the lead roles with strength, power, conviction and vigour. The film is simultaneously moving, witty, colour-filled — one that balances the extreme emotions of sadness and joy with subtlety. The sound editing is excellent as is the pacing of the cuts. The script is strong and dialogue crisply written. The closing song (written by Aisha’s brother Ishaan Chaudhary) over the rolling credits and montage of family-album photographs provides an appropriate closure to the film. I went to two well-attended shows and was witness to a standing ovation at the end, which was richly deserved. An inspirational story, honestly told and realistically grounded. The Sky is Pink is an important film for many reasons — a must-watch!

For me the film’s main character is clearly the mother and her extraordinary drive and zeal for life. Aisha is the sutradhar, and an important thread and storyteller — both heart breaking and pungently witty — using an effective internet-laced millennial vocabulary. I did think the film could have done without some clichéd ‘Bollywood moments’ but they were too few in an otherwise strong film to merit more mention. Shonali Bose has an exceptional track record of socially urgent films such as Amu, Margarita with a Straw, and Chittagong — and this is another feather in her highly talented cap.

A new and updated edition of My Little Epiphanies (Bloomsbury, pp.70, Rs 295) has been recently released as a film tie-in. The book is a compilation of thoughts that Aisha scripted into her “doodle art”. It has new chapters by her mother Aditi Chaudhary, by Priyanka Chopra (also the co-producer of the film), and by the director Shonali Bose. The re-jacketed cover has a still from the film, The Sky is Pink, and a slew of endorsements from celebrities such as Danny Boyle, Deepak Chopra, Shekhar Kapur, Shantanu Moitra, Virginia Holmes and others.

The first edition of the book had come to me a few years ago, and had been lying with the ever-growing pile of books that I expect to peruse someday. Watching the film inspired me to locate the book to hear Aisha as she spoke of happiness (“When I am high, it’s like my soul is telling me a secret”), heart-break (“I hate myself for tripping into this beautiful thing everybody calls Love”), impending death (“And suddenly I found myself caught somewhere in between not living and not dying”), isolation (“Something must be wrong when the music is blasting and all you can hear is that deafening silence”), pain (“I want to run out of my body”), sadness (“when I am sad people tend to brush it under the carpet; but I can’t do that because I am the dirt”). At the end what comes through is the essential innocence and honesty of Aisha’s raw visceral voice as she copes with life and with her degenerating disease.

It is always a tricky task — balancing grief and gaiety, private and public, literature and commerce — in any artistic endeavour. And again, I have reservations about the manner in which the recent edition has been rejacketed and repackaged. It is also not easy to discuss the literary merit of works that spring from suffering, especially if you are to put on a critical hat. When I read the book, I am touched by the story of the young girl’s life, her struggle with pain at many levels and the precocious wisdom that accompanies such pain.

But both the film and the book are ultimately a celebration of life and loving, about the adventure of living — as Priyanka Chopra in the foreword writes, “You can’t change the cards you have been dealt with… but the hand you play, that’s on you”. And at the end, the core essence is what touches and survives — go and watch The Sky is Pink, go and buy a copy of My Little Epiphanies.