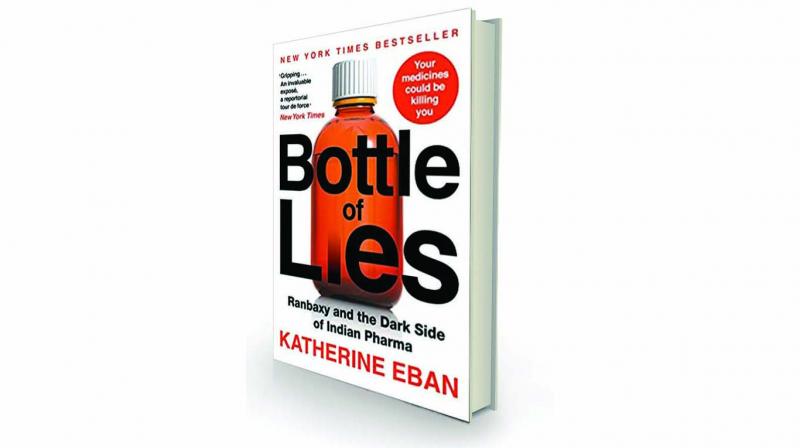 Bottle of Lies: Ranbaxy and the Dark Side of India Pharma, by Katherine Eban Juggernaut, Rs 699.

The rise and fall of Ranbaxy is an engrossing, yet deeply disturbing, narrative that confirms our worst fears about the drug industry. It illustrates the ends to which a much-celebrated blue-chip pharma company, which once fancied itself as a challenger to Pfizer, can go when fuelled by sheer greed. It also brings out the eventual fallout when jugaad — the Indian approach of taking dubious and often unscrupulous shortcuts — is confronted by a functional regulatory authority.

New York-based investigative journalist Katherine Eban’s 482-page book is an eye-opener. It is a well-researched account that took four years in the making and included extensive ground reporting from India, China, Ghana, England, Ireland, Mexico and the United States. The result is a chillingly dark exposé that you wish were not true and merely a work of fiction.

The principal focus of the book is Ranbaxy. And the protagonist is Dinesh Thakur — the whistleblower who alerted the US Federal Drug Administration (FDA) about the goings-on in the company and how it was selling a wide range of substandard medicines in America. His is a courageous effort
and stand.

It is through Thakur’s eyes that Eban threads the story. It all began when he gave up his secure job in New Jersey with Bristol-Meyers-Squibb to join Ranbaxy in 2002. It was a tectonic career shift for the 33-year-old information scientist. He had quit a reputed, successful and award-winning American pharma major that developed branded formulations to join an emerging Indian generic medicine company with the stated objective of disrupting the pharma industry worldwide by producing affordable alternatives to expensive medicines.

Thakur knew that though both companies manufactured pharma products, the primary goal of the branded and generic drug manufacturer was markedly different. The former innovated to produce the best cures for the highest profit margin. The latter provided affordable replicas. Much attention was devoted to R&D in BMS. The focus at Ranbaxy was on reverse engineering and duplication.

When he took charge as global head of research information and portfolio management at Ranbaxy’s headquarters in Gurugram, outside Delhi, Thakur was unaware that he had walked into a company where disarray reigned. He took it upon himself to bring some order and for a start began creating an archive for the company’s data and records. These included day-to-day details of the manufacturing process of each drug, quality checks, laboratory tests and clinical trials.

But as Thakur began the process of digitalising records, he faced stiff resistance. He soon realised that transparency was the last thing that anyone wanted in a company that backdated and manipulated records. He first got an inkling that something was seriously wrong when he learnt that a WHO study conducted on behalf of the South African government — which was buying an anti-retroviral (ARV) drug from Ranbaxy to treat AIDS patients — revealed that the clinical trials of the drug in question were conducted on non-existent patients and that all the data submitted had been fabricated.

Thakur was left wondering if the ARV (antiretroviral) drug was the only instance in which data had been fabricated. He recalled an incident the previous year involving his son Ishan. The three-year-old had an ear infection and was prescribed a generic version of a strong antibiotic manufactured by Ranbaxy. It failed to provide any relief. But results were almost immediate when the physician changed the prescription to the same drug made by another pharma company. His investigations in the months that followed revealed a shocking case of deception. Fifty per cent of the data Ranbaxy was submitting to the US FDA was fudged. Ditto EU countries. As for Latin American countries and the poorer African states, the less said the better. For example, virtually all the 163 drugs approved by Brazil were backed by fake data.

At Ranbaxy’s manufacturing units the promised due diligence was not being followed. Lower grade ingredients were being used to cut costs. Tests and clinical trials were manipulated to show the efficacy of formulations. Top executives acted as couriers to ferry suitcase loads of branded medicines from abroad which were then passed off as the company’s own to generate fake results. In countries where regulators were lax, fake data was blatantly generated without even going through the charade of conducting tests.

In April 2005, Thakur quit Ranbaxy. And on Indian Independence Day the same year, he decided he would expose the company he had worked for. He opened an email account posing as Malvinder Singh, a low-level scientist in Ranbaxy, and started writing to international agencies, including the WHO and US FDA. The pseudonym he chose was symbolic — it was the name of the heir apparent and future CEO of Ranbaxy.

Over the next few years the information that Thakur passed on to the FDA and other authorities led to Ranbaxy being investigated and taken to court. In 2011 the company, cornered by a mountain of evidence, agreed to pay $500 million to settle the cases against it in the US. Then came the downslide. In April 2014, the company was finally sold to Sun Pharma, another generic drug company.

But was Ranbaxy the only Indian company guilty of manipulation? Eban’s book also looks at Wockhardt, Mylan, GVK Biosciences, Zydus and Dr Reddy's Lab which ran into trouble with US drug regulators. However, the revelation by a Ranbaxy official that data submitted to the Indian regulator — Drug Controller General of India — was “100 per cent fake since no regulators ever looked at data” is cause for concern. Can we trust the quality of the drugs in our market?

If there is one flaw in Eban’s book it is her sweeping presumption that branded drug manufacturers in the West are above board while those producing generic medicines in India and China are villains. This is far from true. An Oklahoma court recently holding Johnson and Johnson guilty of marketing its opioid painkillers while downplaying the risk of addiction is a case in point. The US company was asked to pay $572 million in damages for fuelling an opioid epidemic.

The moral of the story is perhaps this: drugs — whether branded or generic — must be monitored. And regulators must constantly guard against pharma companies who put profit over people’s lives.