Doklam was China’s way of telling India that they might be building ties with the US but really should remember who they are. 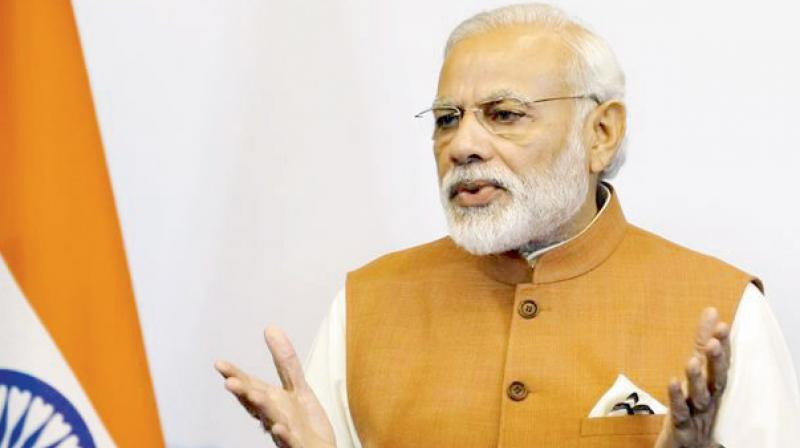 Dr Aparna Pande’s From Chanakya to Modi: The Evolution of India’s Foreign Policy is that rare book. It is written by someone outside government, unencumbered by policy fatigue or being too close to the powers that be.

In fact, in its refreshingly honest retelling of the dictum that ‘Panditji knows best’, a reference to India’s first Prime Minister Jawaharlal Nehru’s almost omnipotent influence on the conduct of India’s foreign policy, she paints a startling picture of how despite frequent changes in government, post the Indira-era, India’s external relations have shown remarkable continuity and consistency to this day.

Her critique doesn’t stop with Mr Nehru crafting the policy that his successors have followed and which she believes continues to  remain ‘overly idealistic,’ and has a ‘strong moralistic undertone.’ Dr Pande, extends the metaphor right down to our present times in this book which examines how India’s world view has evolved over the years, while laying out the institutions, ideas and attitudes that have shaped it.

Referring to PM Narendra Modi’s 2016 initiative that has seen the U.N. adopt World Yoga Day, she writes ‘That Indians believe that the popularity of yoga is evidence of India’s importance in the world explains how India views itself from a very different perspective than other nations.’ ‘Indian leaders often suggest that the more India participates in multilateral organisations, adopts principal stands on global issues, champions global peace and disarmament, and speaks out against military alliances, the higher the pedestal it occupies on the world stage. The reality of the world — and the role India plays in it — is more complex,’ she adds. Not mincing her words on how India fails to follow through on its big promises vis a vis aid to countries in its im-mediate periphery, India’s challenge, she writes, lies in wanting to be accepted as the dominant power in South Asia, its desire that neighbours look only to Delhi and not to outside powers, while expecting major powers like the US, China and the west to accept India’s dominance, keeping India’s interests in the region, in mind.

As she tells Neena Gopal in an interview, the influence of Chanakya in this context lies not just in naming the capital Delhi’s diplomatic enclave after him, but in the way in which ‘India has sought a system of layered relations coupled with the mistrust of other nations — the core of Chanakya’s mandala theory.’ Under the stewardship of PM Modi, who like the India of yore has skillfully asserted primacy but never forcefully taken territory, the new Modi Mandala expects its neighbours to consider India as the Chakravartin. Excerpts:

You say that India which sees itself, as the ‘champion of anti-colonialism, founding member of NAM’ still unable to fulfill the requirements that qualify it for great power status? You quote Bharat Karnad as saying that India does not have ‘a driving vision’ , ‘a sense of national destiny’ ‘ a definition of national interests, an imaginative use of hard and soft power? In essence, you are saying that even Narendra Modi, who’s made such a big splash with International Yoga Day, we are essentially more about soft power than hard?
No. Not yet. I do agree largely with Bharat Karnad except on one point: We do have a sense of our destiny. It’s not well-laid out, perhaps, like the United States or China, but we see our rise to power as something inevitable, a conviction that stems from our pride in our 5,000 year-old civilisation. But nobody seems to have an answer about how we’re going to achieve this. We feel, at some level that the world owes it to us.

It’s wonderful that people across the world celebrate Yoga Day, although this does not establish us as a superpower! The term contains certain dimensions: Do we have the economic wherewithal from infrastructure to investment, to the economy’s size and the number of people below poverty line? Can we attract labour? That we are purchasing new military equipment is a point of pride but it’s such a slow process that complaints pour in from army, the Air Force and the Navy. Things have changed over the last three years but there is still a gap between who we are and how we see ourselves.

What are we today, have we shed the preachy, moralistic ‘Nehruvian’ tone, and the tough Indira Doctrine, and Rajiv Doctrine for a Modi doctrine. What do you see that as evolving into? Is there a Modi Mandala? Has he broken with the past or in reaching out to everyone, are we simply doing more of the same — still non-aligned yet tilting towards one great power?
No, we have not shed our preachy, moralistic tone, because this is part of the Indian psyche. The National Movement, led by Gandhi, has made us believe that we are very special. So when you’re ‘unique’, that moral dimension creeps in to your thinking. Contrary to popular belief, our foreign policy remains very Nehruvian. We seek independence in decision making and strategic autonomy or non alignment.

The PM may not go to a NAM summit but someone will. The decision is taken and made out to be representative of India as a whole. We decide to sign Paris treaty, on Gandhi Jayanti, because it’s ‘important for India’. Symbolism matter.

Our attitude has been one of entitlement, we see ourselves as very unique and special and that we should be treated as such accordingly: ‘We are India, we are unique, you have to make an exception for us. We have 1.2 billion people and isn’t it a moral responsibility to ensure that they are all fed?’ We say all the right things, but don’t do very much more. The gap between what we are and what we could be is still there — it’s huge. As China reminded us and we responded by saying that the India of 1962 is not the India of 2017. China isn’t the same China either and I believe Doklam is different because we have the advantage there. We also have the US which is more disposed towards us. Will they support us like they did in 1962? It’s hard to say, for Kennedy was personally disposed towards us. Things are favourable but will Trump really go out of his way to help India when it’s not doing much for the Allies? It’s fortunate, perhaps, that they have chosen Doklam, any other place might not have given us the same advantage. Now, our military is better equipped there. Where is the Henderson Brooks report? Its time we went public with that.

Have you had access to the report?
No. I have only seen the bits that Maxwell posted on his blog.

Can you chart the doctrines, from  Nehru to Indira, Rajeev, Gujral and now, Modi?
The Nehru doctrine had a very strong messianic idealism, it was based on the belief that India is very special and we don’t have to do anything about it. He said, ‘We only have to wait for the world to recognise us.’ Independence in decision making was all important, even if that meant walking a lonely path. He was a realist s he was, for example, in Goa. With the neighbours, India has been more realistic — I call it a Curzonian mindset. ‘Delhi knows best’, so all our neighbours must understand our imperatives and keep our interests in mind. With the neighbours it was an imperialist thing.

Yes, India is a beacon, the main power along with China. Still, India won’t send her troops out, doesn’t want to be part of the world, we don’t want to join alliances, Blocs. Lal Bahadur Shastri, who had a very short tenure handled it well.

Indira did have a very strong realist dimension, but that messianic idealism did creep in — this was evident in her speeches abroad, which would talk of peace, justice and the international order being against India. Nehru was more of an internationalist — he had travelled the world and had relations with countries that had gone through national movements of their own. Indira didn’t have that kind of background. Her interest beyond South Asia was strictly limited to what was required. It was very nationalist and focused largely on the subcontinent. The imperialist legacy also continued and it was important to her, that neighbours kept the ‘Indira doctrine’, refusing the entry of foreign powers into the area. She expected India to be accepted as a paramount power. India believes that the United States recognises us as a regional power and they consult us on Bangladesh, Nepal, Sri Lanka. Of course, we want them to consult us on Pakistan as well.

On Pakistan, you’ve shown how the Gujral doctrine which in destroying our intelligence assets and removing our eyes and ears, handicapped the Vajpayee administration, with the two biggest blots on his handling of Pakistan — Kargil and Kandahar —caught India napping. Do you think this government has been equally blind to the power that Pakistan’s army wields in inviting Nawaz Sharif to the Modi swearing in, and the impromptu visit to Lahore for Nawaz’ grand-daughters wedding without factoring in the blowback from the military-ISI that has led to the current standoff in Indo-Pak ties?
Every PM believes that his legacy is to resolve the India-Pakistan conflict, which unfortunately for all of them, will not happen unless the underlying reasons are looked at carefully. The Pakistani establishment looks at India as an existential enemy, their rhetoric comprises largely of India’s supposed wish to reverse the Partition as they seek parity with us in every aspect.

Vajpayee, like Nehru, believed that India will benefit from better relations with Pakistan and being the right of centre, Jan Sanghi politician he was, fancied himself to be just the man for the job. Modi inviting Nawaz Shariff to his swearing-in was a very Vajpayee move in that sense. However, civilian Pakistani PMs are afraid to exert their power, they simply want to survive their term.

The bottom line is that peace is not profitable to the Pakistani army. They don’t want the ramifications of an all-out war, of course, but as far as they’re concerned, this uneasy status quo is ideal.

On China, and the recent controversy over Doklam and Bhutan, how do you analyse our handling of relations with Beijing? While we may not be as naïve as Nehru was, do you think PM Modi has again started off on the wrong premise with the jhoola diplomacy only to be caught napping with the OBOR, where we overplayed our hand in boycotting it, and still played nice at G 20 and now the disengagement ahead of BRICS, despite the daily bashing from a China government mouthpiece?
The relationship between Mr Modi and President Xi goes back to the former’s days as CMs. Both have a lot in common, they’re seen as economy-focused with a nationalist foreign policy. This might help China take him more seriously than other PMs. Unfortunately, China has views about what India’s place in the world should be and they want to ensure that we are kept in that place. Doklam was China’s way of telling India that they might be building ties with the US but really should remember who they are.

Dr Aparna Pande is director of the Initiative on the Future of India and South Asia at the Hudson Institute in Washington, and author of From Chankaya to Modi as well as Explaining Pakistan’s Foreign Policy, and Escaping India