Relationship between a person & her art

Fanning the hearth, or pounding at the pestle or beating the clothes on the stone they will try out what they have learnt. 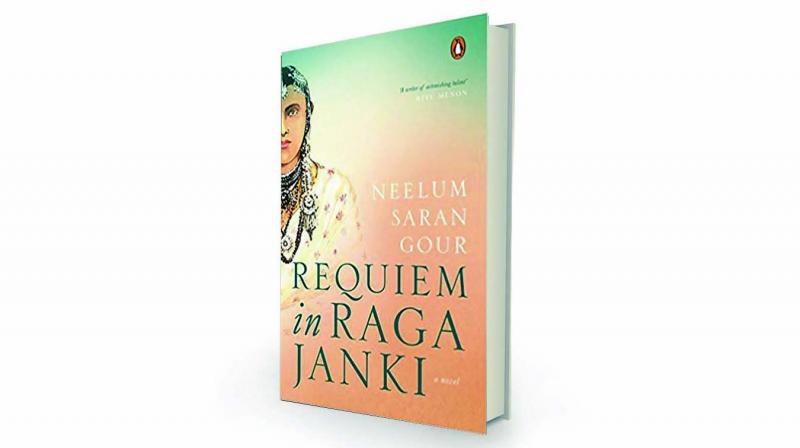 Janki Bai Ilahabadi’s colourful story, she of the “Chhappan Chhuri” marks has all the hallmarks of an interesting period fiction: a woman trapped in a feudal world rising from penury, even overcoming disfigurement, to achieve glittering success, only to be let down by the men she loves. That it is based on the real life story of a Hindustani classical singer and poet, pieced together from biographical accounts, the letters and accounts of admirers, and the protagonist’s book of verses, makes it even more fascinating.

Janki Bai’s lifespan (1880-1934) gave author Neelum Saran Gour an opportunity to place her as a woman with a foot in two worlds and Saran Gour does not waste her advantage. The picture that emerges is that of a singer and poet who rose in the time of kings by playing at durbars and who also went on to cement her career among the newer technologies of the recording machines and players.

She was a star performer at the Royal Coronation ceremony in 1911 before George V and Queen Mary of Teck and was inspired by the quickening freedom struggle by going on to donate those very sovereigns that she had received from the Queen’s hand to “Nehru’s cause”.

She was also, as Saran Gour writes, at the centre of dynamic historical and cultural events and traditions in a way that made her very existence a mark of irony.

None sweeter than Nehru’s letter as included in the novel, saying he will be keeping the gramophone record of her coronation singing that she gave him to be burned as a pledge of her nationalism because it is an artefact, he claims, and “I cannot bring myself to consign it to the flames.”

It is early on that we see Gour working in her particular ironies into the novel. A naïve young Janki, still training in music under the renowned Hassu Khan, hears the legends of the greats that came before her, and also of her own teacher’s musical lineage.

“It was Natthan Khan Peer Baksh and Qadir Baksh, peace be upon their souls, who taught me all I know, unworthy as I am.” Khan goes on to say, “Fortunate was I to be vouchsafed such teachers. Ah, wash out your mouth with rose water before you utter their names!... For they are the custodians of inherited compositions, ancestrally preserved skills that they will never, never impart to a stranger…”

“In the old gharanas the real taalim, the precious teaching, was only for sons. The next best was for the sons-in-law, so that they could earn a living in music. What remained was for outsiders…” To which Janki timidly queries, “But wasn’t there anything for daughters?” “How could there not be?” Hassu laughed his throaty laugh. “Can anything be hid from you prying women? They will catch things from beyond a three-foot-wide stone wall, from behind a heavy shisham door. Sitting coyly behind their veils, their nimble brains will hear and memorise.

Fanning the hearth, or pounding at the pestle or beating the clothes on the stone they will try out what they have learnt. What knowledge can be hid from you women, bibi? Then they will have such dire threats. Sing this for me… no, bibi, you women are the undoing of us all! To answer your question, daughter, the heritage passed from father to son and from son to grandson but the dower of daughters wasn’t small.”

A similar resistance and sexism awaits Janki when she attempts to apprentice under a male poet. That this very tradition would be taken to its heights by female singers like Janki Bai and Gauhar Jaan, often supplanting men in favours and prestige, despite having to overcome the prejudices of coming from a background of tawaifs rather than pure artistes provides an interesting after taste to her interactions. It is not surprising that both these women are seen in the novel to be wrestling with men over power equations; ultimately used for their wealth and made to feel ashamed for how they have generated it.

There is much to interest a student of Hindustani classical music in the way legends and histories, connecting artistes like Tansen, Baiju Bawra, Haddu and Hassu Khan, Shakkar and Makkhan Quawwal, Ustad Wazir Khan and others are woven in the story, sometimes with reverence, at others like spicy pieces of gossip exchanged among practitioners.

At early moments in the book, Saran Gour struggles with the sheer weight of her material and her prose suffers, some bumps being either too stylised or too casual. Yet she manages to keep the focus on young Janki, the blossoming artiste, a woman who herself is the stuff of myths and legends by the time the account is closed.

What is most engaging about the book is its essentially womanising approach. The inside world of women shines through, particularly as we see Janki with her mother, her rival Gauhar Jaan, and a range of womanly influences from prostitute to queen.

Saran Gour does well to also show Janki Bai as a flesh and blood woman herself, varying strokes both broad and fine to show her strong sense of pride as well as her humble accommodations as she traverses the world of chauvinism, tragically unsure of where she will land.

Requiem in Raga Janki can be unwieldly in small parts but it is large-hearted meditation on the relationships between a person and her art, her era, and her family, all seen through the filter of this remarkable character, and it leaves the reader in a mood that lingers much like on hearing an unforgettable raga.