The author sees PM Modi as the man of the hour, the man of destiny, who has completely altered India’s security and strategic perspective 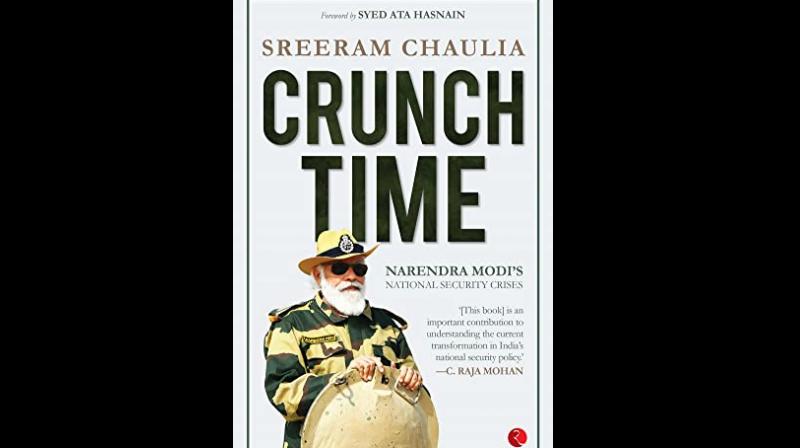 This is a partisan’s book, but there is no pejorative attached to the word partisan. The author, an academic, argues his case well with arguments and opinions and facts in a way that strengthens his basic thesis that Prime Minister Narendra Modi has changed the theory and practice of national security. The author’s partisan overtones are reflected in the opening pages when he contrasts the ineffectiveness and ineptitude of the Manmohan Singh government in the aftermath of November 26, 2008, Mumbai terrorist act in contrast to Prime Minister Modi’s calibrated responses to the terrorist attacks in Pathankot and Uri in the September2016 surgical strikes on the camps in Pakistan Occupied Kashmir (PoK), and the February 2019 Balakot airstrike after the Pulwama terror attack. And he also argues that Mr Modi and India had handled the Doklam crisis on the border of Bhutan quite well, as also the eastern Ladakh confrontation in May-June 2020. He also highlights Mr Modi’s style of decision-making in the creation of Chief of Defense Staff (CDS) and the construction of the War Memorial, both long-pending issues. He points to the new, personalised style of Mr Modi’s diplomacy, of personal chemistry with his counterparts, whether it is with Pakistan’s Nawaz Sharif or with China’s Xi Jinping.

We have got used to the wrong idea that an academic account should be objective, neutral and critical. This is not so. Much of the academic work in the United States is partisan, sometimes Democratic or Republican, and at other times even personality-oriented, whether it is about John Kennedy, or Ronald Reagan. So, once we get used to the idea that an academic can make a legitimate partisan presentation, Chaulia’s book becomes read-worthy. Even then, he sometimes goes overboard in his praise of Mr Modi. For example, he writes: “The Indian journalist Uday Mahurkar has narrated a point-blank exchange between Modi and Xi on the banks of the serene Sabarmati river, when the Indian leader apparently said, ‘this was not expected of your country’ and asked, ‘Can you tell me when the troops are withdrawing.’ While the exact wording of Modi’s plain-speaking with Xi has not been officially declassified, the Indian leader revealed that he had not pulled punches out of any obligatory sense of hospitality, expectations of Chinese foreign direct investment (FDI) in the Indian economy, or deference to Chinese military might…” (p. 38). And about Modi’s decision to conduct surgical strikes in PoK on September 28, 2016, after the terror attacks in Pathankot and in Uri military bases, the author says, “One vector of this transformation was Modi’s Gujarati self-confidence and entrepreneurial spirit to undertake calculated gambles.” (p. 19) It is indeed an interesting way of explaining things.

The author does reveal that India was in close tough with the United States before the surgical strikes in PoK, and that India’s national security adviser (NSA) Ajit Doval was in constant touch with his counterpart Susan Rice. The author writes: “On 28 September 2016, just before the surgical strikes, Doval spoke to his US counterpart, Susan Rice… Once Rice learnt about the surgical strikes the next day, she called Doval again, ‘to ensure that there was no further escalation.’…” (p. 24) The crucial missing link is of course whether Doval told Rice about the surgical strike to be carried out. From the call she makes the next day, it appears that Doval did not disclose the crucial information. This is to show that India is acting on its own despite close consultations with the US. The tacit consent of the US seems pretty evident.

Similarly, the narration about the capture of Indian Air Force (IAF) pilot Abhinandan during the Balakot airstrike in February 2019 says that India pointed six missiles ready to be fired at Pakistan if it did not free Abhinandan. Interesting lore, but again we may have to wait a long time before we can verify the details even as we accept the author’s version at face value.

The author sees Prime Minister Modi as the man of the hour, the man of destiny, who has completely altered India’s security and strategic perspective because of his personal derring-do. He says that this has freed India from the Hamlet-like indecisions of the previous prime ministers, and he has in mind prime minister Manmohan Singh. This is a useful book to read because it gives a sound justification and rationalization with an overlay of details about Modi revolutionising India’s responses to terrorist attacks from Pakistan, and military confrontation from China. But there is need to take Chaulia’s arguments with a pinch of salt. All the facts of the case are not in, and it is no fault of the author.