The two animals on the cover are the buffalo calves, Bela and Baadal, who are part of the last story, The Gift. 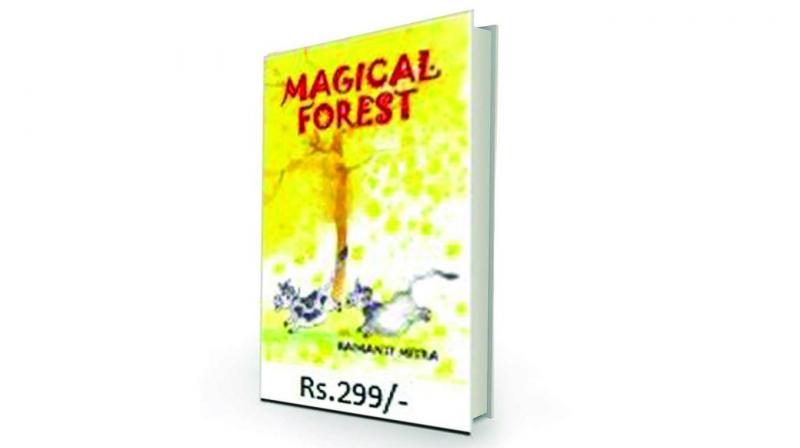 When I received the review copy of Magical Forest written by Haimanti Mitra, published by Quill and Canvas, a bookstore-cum-art gallery in Gurgaon, which has taken baby steps into publishing, with a collection of stories based on folktales and myths, I was surprised by the quality of the book. Magical Forest by a newbie publisher can give serious competition to the books published by big publishers.

Children’s publishing definitely needs to expand its horizon, both in terms of quality (the kind of books published) and quantity as it should invest in a few good series as well as break away from the monopoly of the Big Five as the five major publishing houses are known as. Small publishers who bring out good books must be given a leg up in this harsh book- eats-book world of publishing, where the biggies — the books by established authors as well as the ones published by the big publishers — hog all the space.

Magical Forest consists of six stories based on folktales from Uttarakhand, Nagaland, West Bengal, Gujarat, Madhya Pradesh and Karnataka. The first story aptly titled A Misadventure is about the newly-wedded Mr and Mrs Fox. Mrs Fox, tired of living in the hole and hunting chickens, wants to plan for the future by building a terrace farm and growing fruits and berries, her legacy to her children. For this dream to materialise, they need land but the problem is all the land in their area belongs to the village headman. Mr Fox approaches the village headman for land, and as expected the headman keeps dilly-dallying. To know whether Mr Fox gets the land or not, you will have to read the story.

Man’s Best Friend is the story of an underdog, and talks about self-respect. As the title suggests, it is about a dog named Doogie who wants to set up his stall in the forest market with other animals on Market Day. The bear, the wolf and the fox, push Doogie and crush his peas. Doogie requests Huli the tiger for help but it rebukes him. Finally, a woodcutter, Manava, comes to his aid. Manava offers to teach him ancient martial art skills, which will help Doogie fight for his rights and in the process also earn respect from the community.

Feather Bright, has a very folktale like feel. I guess this story is based on a popular folk tale of the tribal communities of Nagaland and their harvest festival, the Hornbill Festival.

Then there is the story, Magic Cloak, about a girl named Geeta and her meeting with the spirit of the forest who gives her a magic cloak. The fifth story, Hunter, is about a cruel hunter named Rang and his obsession with shooting animals.

The two animals on the cover are the buffalo calves, Bela and Baadal, who are part of the last story, The Gift.

What I liked the most about this book are the footnotes after each story explaining the terms used in the story as well as the region and the myth around it. Each story moves with a gentle pace and contains a subtle message that is neither preachy nor does it talk down to a child.

The black and white illustrations by Srividya G.S. are delightful. Her pencil sketches make the animals leap off the pages. Mitra weaves myths and legends into her stories in an interesting fashion, her writing style leans more on story telling than heavy prose, which is suitable for children who prefer getting into the action rather than reading lengthy descriptions. The stories touch common themes of friendship, betrayal, deceit, retribution, love and forgiveness.

My advice to the parents of the young readers let Magical Forest take your children into an enchanted forest and let them befriend the animals and birds there. But don’t get mad at me if your child demands a pet after reading this book.

Rachna Chhabria is a Bengaluru-based children’s author and a freelance writer.