The rhyming structure and tonal sub-variations in Urdu/Hindi is very finetuned, and often difficult to match in English. 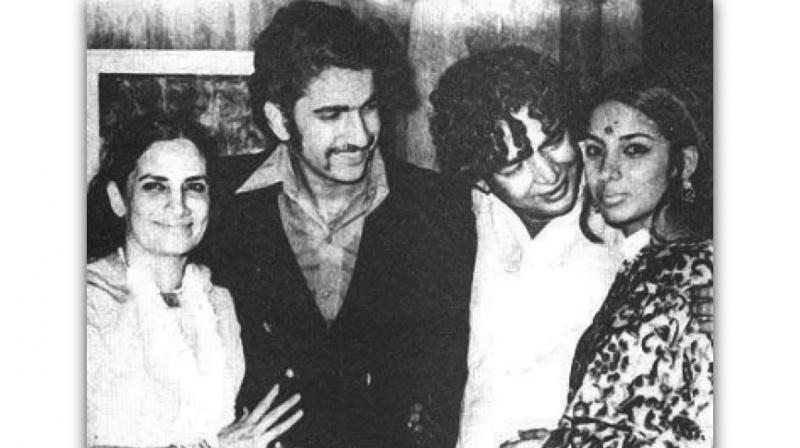 Wife Shaukat Kaifi, son Baba Azmi, the poet and his daughter Shabana on his 25th marriage anniversary in May 1972. (Photo: www.azmikaifi.com)

The first time I felt the power and magic of Kaifi Azmi’s poetry was as a child, when I heard my mother reading out his poem, ‘Aurat’ (‘Woman’), at a family gathering during the Durga Puja festival in New Delhi’s Chittaranjan Park, a predominantly Bengali neighbourhood. The opening line and refrain — “Uth, meri jaan! Mere saath hi chalnaa hai tujhe | Rise, my beloved! With me, you must walk along” — still echoes in my ears. I was smitten by the depth and parabolic lyricism of Kaifi’s words instantly, drawn to its political core in a way that I might not have understood then, but that has certainly shaped my poetic ideology as an adult.

It was the start of immersing myself in Urdu and Hindi poetry. The world of Bengali and English poetry was already familiar to me — the two languages that were constantly used in my familial space. However, as someone who grew up in Delhi, Hindi was an equally important part of the lexicon and became one of my three mother tongues. The act of serious literary translation was, therefore, waiting to happen for me. It was just a matter of time, considering we were constantly inter-translating between three languages at home in our everyday conversations, sometimes even using all three in the same sentence.

The 100th birth anniversary of Kaifi Azmi fell on January 14, 2019. In the early part of the previous year, as winter was waning, I had a chance meeting with Shabana Azmi and Javed Akhtar at a cultural event at the beautifully restored Bikaner House in Lutyens’ Delhi. Shabana shared that as part of the centenary birth anniversary of Kaifi Azmi, there were plans for year-long celebrations. It was then that the idea of my new book, Kaifi Azmi: Poems | Nazms (Bloomsbury), took root. After that meeting, I revisited the Kaifi Azmi section in my own library. I leafed through his collection of published poems. I re-read the available translations in English. I read anecdotal accounts on his life by his family and friends — and as I read more and more, the book took shape.

Kaifi Azmi: Poems | Nazms includes a generous selection of 50 poems — new translations by Husain Mir Ali, Baidar Bakht, Sumantra Ghosal and me, and select older translations by Pritish Nandy. All of us who have translated Azmi’s poems, bring to this book a wide variety of approaches, politics and aesthetic sensibilities. Despite the translators sharing a similar linguistic background — Indian/South Asian — the translations themselves are beautifully diverse, centrifugal and manifold.

My own take is entirely from the point of view of a practising poet in the English language. Since Bengali and Hindi are my two other mother tongues, it has been easy for me to render accurately from the Urdu/Hindustani original of Kaifi Azmi’s poetry, keeping its cadence and lyricism as close to the original as possible. At the core of my translation process, an important aspect I have kept in mind is that the English versions should read as good contemporary poems — one that allows the translations to satisfy the litmus test in the wider national and international English-speaking literary world. I hope I have been able to achieve that.

My relationship with Azmi’s poetry was first emotional, aural and visual — then my engagement became more cerebral and mature as I evolved as a reader and writer over time. At the surface, Kaifi Azmi’s poetry appears political and familial. His subject matter spans the ideas of nation, state, border, history, as well as themes of love, longing, despair, hope and more. His poetry, his work as a lyricist in mainstream Hindi cinema, his journalism for the Communist party newspaper, his role as a husband and father, his incredible social work for the welfare of his ancestral village — Mijwan and its surrounding area — and more, make him not just a remarkable artist but a truly outstanding human being. All these are reflected in his large oeuvre of creative work — and in his poetry’s canvas. The accretive quality of an ongoing life’s wisdom is distilled in a form that is not only honest, but also highly oratorical. He read his poetry aloud beautifully, and one cannot but be mesmerised by his voice and the trance-like quality of his delivery.

In my translations, I have tried to bring out all that as best as one can in another language. Every language has its limitations and its advantages — and English is no exception. The rhyming structure and tonal sub-variations in Urdu/Hindi is very finetuned, and often difficult to match in English. However, one of the advantages of English is its enormously wide vocabulary, a language that grows every year taking into its fold words and phrases from other languages. My translations are done very much from the point of view of a practising English-language poet — and the most important barometric impulse was that they should read like good poems in English.

Kaifi Azmi, whose real name was Syed Athar Hussain Rizvi, was born on 14 January 1919 in a zamindar family in the village of Mijwan in Uttar Pradesh’s Azamgarh. He wrote his first ghazal — ‘Itna to zindagi mein kisi ki khalal pade’ — at the age of 11. What marks this debut piece of writing is that it was later sung by the well-known singer, the young Begum Akhtar.

Azmi abandoned his Persian and Urdu studies during the Quit India agitations in 1942 — and shortly thereafter, became a member of the Communist Party of India. Later, he went to Bombay and joined Ali Sardar Jafri in writing for the party’s paper, Qaumi Jung. At the time of marrying Shaukat Kaifi, he was a “full-time” card-carrying member of the party, living in a commune-like arrangement in Mumbai. A member of the Progressive Writers Movement, Kaifi worked closely with the labour union movement and his concern for the less privileged has found ample voice in his poetry. 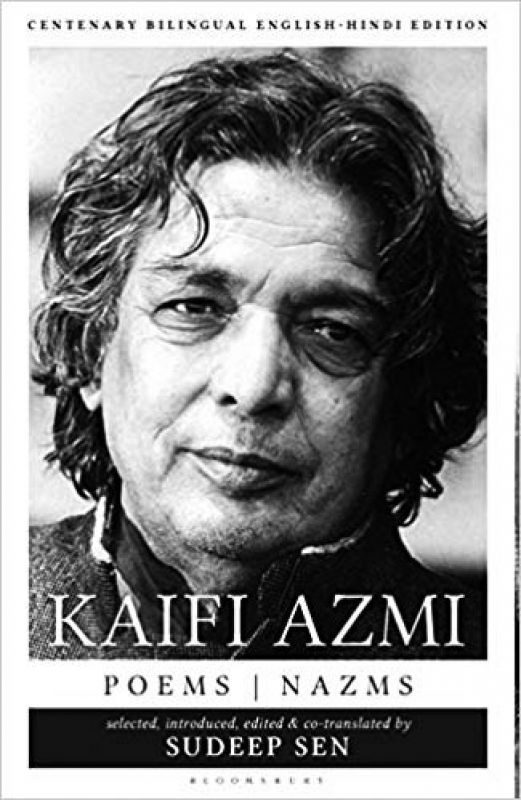 In February 1973, when Kaifi Azmi was in his mid-50s, he suffered a paralytic stroke, which left his left hand and leg incapacitated for life. Even as he struggled with the disability that was imposed on him, he continued to write. He also chose, at this stage, to direct his energies to the upliftment of Mijwan, the village that was his birthplace. This stayed his focus till the time he passed away, aged 84, on 10 May 2002. In recognition of his contribution to the area, the Government of India named the train that ran on the Delhi-Azamgarh-Delhi route as ‘Kaifiyat Express’.

I first met Shabana Azmi about two decades ago in Bangladesh. I recall telling her that I greatly admired Kaifi Azmi’s poetry, and that I had an out-of-print copy of Nandy’s translations of The Poetry of Kaifi Azmi. This sharply piqued her interest — she said she did not herself have a copy of it anymore and asked if I could pass it on to her. Shuffling hesitantly, I replied that I would happily give her photocopies of the book, but the original copy was one of my prized possessions. The next day, I sent two sets of photocopies of that book to the hotel she was staying in, with a note requesting if she could mail one of them back with Kaifi Azmi’s autograph.

Some years passed and then, in 2001, I received a package from her containing the then newly published book of translation by Pavan Varma, Kaifi Azmi: Selected Poems (Penguin). To my pleasant surprise, it also contained, autographed by Kaifi Azmi dated 26 May 2001, one of those photocopies of my The Poetry of Kaifi Azmi. And on the fly-leaf of the book, was Kaifi Azmi’s autograph and a personal note in blue-black: “Sudeep Sen ke liye, jo khud ek honhar shayar hain.” As a young poet then, and an admirer, you can imagine how thrilled I was (and remain so until this day). My only regret is that I never got to meet him in person as he passed away not too long after that.

In the early 2000s, I published my first Kaifi Azmi translation (‘Ek Bosa|One Kiss’) in a literary magazine, Atlas — and later in my book, Aria, containing 100 translations from various Indian and foreign languages. Now, so many years later, I have had the privilege of co-translating and compiling an anthology of Kaifi Azmi’s poems and, in doing so, immersing myself in his verse, both in the original and translated form. As always, the poetry has left me seared, stirred and serenaded. Here are two opening couplets from ‘Ek Bosa|One Kiss’: “Flowers bloom in unkempt wilted gardens / on the thirst-wrenched earth — clouds collect, hover. // Momentarily, the world relinquish cruelty — / momentarily, all stones start to smile.”

Interestingly, the two-line extract from ‘Inteshar (Anarchy’) that Kaifi Azmi chose to hand write in my autographed photocopy, appears as a signature in all of his daughter’s emails. I end this prefatorial essay with that particular couplet — in Romanised Urdu and in my own English translation: “Koi to sood chukaye, koi to zimma le / us inquilab ka jo aaj tak udhaar sa hai | If only one paid the interest, if only one took responsibility / for that revolution — which even now, seems as a debt.”

In Kaifi Azmi: Poems | Nazms, I hope the readers enjoy the richly fascinating world of Kaifi Azmi, enjoy his poetry — its music, cadence and texture; its passion, concerns and gravitas.