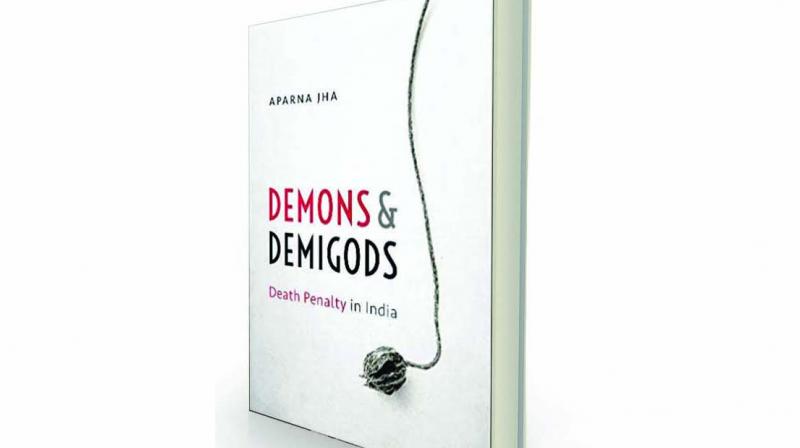 Aparna Jha, a lawyer practising in the Supreme Court, has drawn upon her experience as a lawyer for four young death row convicts, telling their story, and the story of the research carried out by her during the case, to come out with an eminently readable book.

The author, who has written an anthology of short stories as well as a novel, has used her skills as a storyteller to take us through some of the leading cases on the death penalty, describing the actual crimes and associated violence in an almost poetic manner. She makes no attempt to mitigate the severity of the violence that was inflicted upon the deceased, with gruesome details being penned down. And yet, the author believes that the perpetrators of such violence deserve to live, that the death penalty, being nothing but state-sanctioned murder, is wrong, and makes out an impassioned case for not depriving a human being of life. As the last words in the book say if a person is subsequently found innocent, “Can they ever be brought back to life? Then why kill them?”

“The quality of mercy” to quote the Bard, is “…an attribute to God himself”. Mercy, however, cannot absolve the guilty, it merely mitigates the punishment. Over the centuries debate has raged about the desirability or efficacy of the death penalty. Opponents and proponents of the penalty have clear battlelines drawn between them.  In India, from the time of Raja Nand Kumar’s case (1775) to the decision of the Supreme Court in Bachan Singh case (1980), the application of the death penalty has travelled from being the fitting punishment for the crime of forgery to a punishment in the exceptionally heinous “rarest of the rare” murders.  And now the debate has moved on from the death penalty as a punishment in the rarest of the rare cases, to the abolition of the punishment altogether.

There is no crime in India where the only possible punishment is death.  The gravest offences such as murder, mutiny, rape and killing of a child below 12 years of age, abetment of suicide of a minor, abetment of sati, etc., carry the death penalty. However, in all of these cases, the death penalty is one of alternate punishments. The law takes into account that for the same offence, different punishments may be possible. In other words, there is already an inherent protection for the wrong-doer to plead mitigating circumstances to seek a lower penal consequence.

The application of the death penalty has been diluted further still by judicial pronouncements, and now it is only in the rarest of the rare cases, after considering all mitigating circumstances that the penalty is awarded.

Take for example one of the cases discussed in the book — the case of Dhananjoy Chatterjee, a young security guard in an apartment complex in Kolkata, who raped and murdered a teenaged school-going girl who lived in the apartments which he was supposed to guard. There were no eyewitnesses to the murder, but the circumstantial evidence was so strong that the death penalty was upheld by the Supreme Court. In a case where a young girl is savagely murdered by the very man who is supposed to protect her, should issues of the poverty of the parents of the murderer, or the possibility of reform, be factors to reduce the sentence to life imprisonment?  The author thinks they should. But the author’s argument is based on a moral premise that to kill is wrong, and the killing of Dhananjoy Chatterjee by the state is as wrong as Dhananjoy Chatterjee’s killing of the girl who had her whole life ahead of her.

The morality of the law is a subject which is once again contentious and the source of a never-ending debate. However, the fact remains that the death penalty is on the statute books, and till such time it remains there, it is the bounden duty of courts to administer it, within the parameters of the law and judicial precedent.  For a judge of any court, even the highest, to say that he or she would not sentence a person to death on moral principles, would be reducing the law to mere words on paper, reducing its efficacy and setting a precedent that may have severe repercussions. On the other hand, if the civil society was able to convince parliamentarians that the death penalty should be removed from the statute books, that would be a completely different thing.

If you are looking for a book that contains an intellectual debate on the pros and cons of capital punishment, drawing upon the various theories of punishment and justice, and citing facts and figures, this book is not it. It is, however, a useful starting point for an overview on the subject, since the author does refer to other points of view as well as some of the global perspectives on the death penalty, albeit from her point of view.

The interesting thing is that this book made me pause, introspect and review my thoughts and stand on capital punishment. I would say that any book that can make any other person review his or her own beliefs, deserves to be read, whether you agree with it or not.  My views are still unchanged, but reading the book did make me think again.

The reviewer is a lawyer practising in Delhi