What is it that has made the Hindi film industry alluring to its fans over the ages? A mammoth new chronicle takes you down the memory lane. 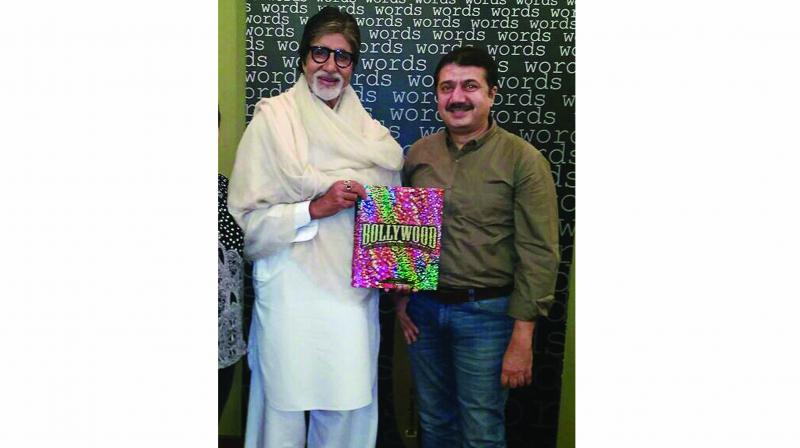 But there is much more to this world of stars and cinema than one can see lit up on billboards, or under spotlights of a red carpet movie premiere. And these are the subtleties that Bollywood: The Films! The Songs! The Stars! tries to cover.

Amitabh Bachchan, who wrote the foreword to the book, said that he had thoroughly enjoyed the content, but expressed dissatisfaction about the name itself.

Co-author Rajesh Devraj, chuckles that unfortunate as it may be, ‘Bollywood’ is a catchword that has stuck. “I understand why many would object to being called a part of an industry that’s just a shadow of Hollywood, but this is the term that has caught on. The only way to change it now would be to come up with a different, equally catchy term,” he laughs.

However, just because it deals with entertainment, the history of cinema doesn’t become less vital. Movies, argues Rajesh, are a reflection of the times. “For instance, during the ’50s, there was a shift in the nexus from studio films, which were shot along with other regional films, in places like Bengal, Lucknow and Pune. There was an attempt — for the first time — to integrate cinema and the nexus shifted to Bollywood. All these trends also reflect the changing times in a post Independence India,” he explains.

The research behind such a nuanced story-telling also needs to be thorough. Film historian Ausaja says that most content for the book came from archives — both public and from his private collection. “Even when telling the stories of film personalities, it is the magazines, newspapers and periodicals of the time that I have referred to. After all, why retell what they have already spoken about in countless interviews, written about in their blogs? Everyone knows the stories of Amitabh Bachchan, Rekha and the like, from their perspective. In my sections of the book, I have tried to explore other views as well,” he asserts.

It’s the classic and golden eras of movies that Karan, who is also a director, and owns a website that highlights Bollywood history, found most appealing. “Guru Dutt is one of my personal inspirations, and not just for the way he handled the narrative, but the technical perfections of his films too. His framing, visualisation, camera movements, coordination of the camera, the use of songs to move the narrative forward, are all aspects that filmmakers struggle with, even now. Aside from him, my favourites remain Vijay Anand and Raj Kapoor,” he smiles. “The Golden Era of films was the time that it all really came together for Bollywood. Though Bollywood has come a long way, I still think that the simplicity of narratives that really relate to the people, got lost   along the way,” he sighs.