The region was retained as a part of undivided Punjab in 1849, when the British vanquished the Sikh power. 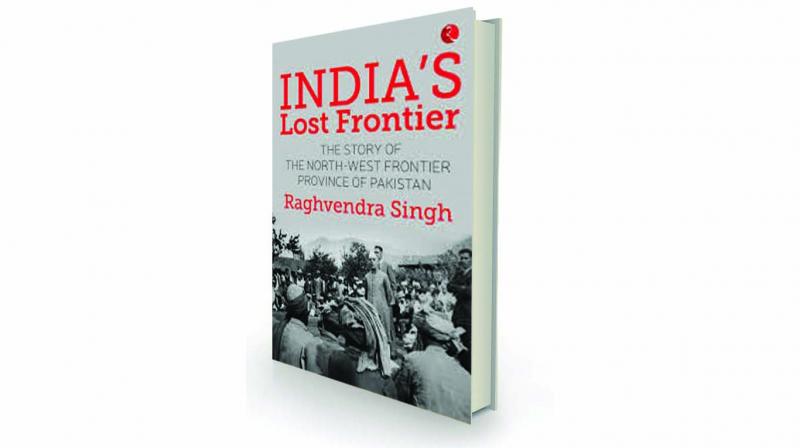 Khan Abdul Wali Khan (1917-2006), the son of “Frontier Gandhi” aka Abdul Gaffar Khan, once famously stated that he had been a Pasthun for the last 6,000 years, Muslim for 1,300 years, and Pakistani for 25 years. The interplay of these factors — ethnic, religious and nationalist — in North West Frontier Province at the tipping point of India’s Partition forms the crux of Raghvendra Singh’s maiden book India's Lost Frontier: The Story of North-West Frontier Province of Pakistan (Rupa Publications) published recently.

The province, now reorganised under the name Khyber Pakhtunkhwa (2010), is not a part of Indian political discourse for the last 70 years. Occasionally in news for terrorism, its history remains little known to most Indians. The last authoritative book on the subject by an Indian viz. the Evolution of North-West Frontier Province was written by Rai Bahadur Diwan Chandra Obhrai in 1938. The reviewer had to depend upon Obhrai's work to know the formative history of NWFP.

The NWFP, for good reasons, is seen as an appendage of Afghanistan. The province was, in a sense, carved out by Maharaja Ranjit Singh 200 years ago. In 1820 the Sikh forces occupied the territory around Peshawar and Bannu, also Kohat and portions of Dera Jat, and pushed Afghan settlers out of that area into barren Afghan hills. The remnant population of the region came under Sikh sway as Khairguzars or revenue payers. The Pathans, or Pakhtuns, formed the majority.

The region was retained as a part of undivided Punjab in 1849, when the British vanquished the Sikh power. Its extent was augmented as a result of the Treaty of Gandamak (1880), when Afghanistan ceded the districts of Loralai, Zhob, Pishin, Quetta and Nauhki to the British. The 2200-km arbitrary line demarcating Afghan and British spheres of influence was fixed in 1893 by British civil servant Mortimer Durand. In 1901, Lord Curzon’s new “Frontier Policy” resulted in the carving of NWFP with its five settled districts viz. Hazara, Peshawar, Kohat, Bannu and Dera Ismail Khan under a chief commissioner; and five tribal areas viz. Swat, Chitral, Khyber, Kurram, North Waziristan and South Wazirstan directly under the Government of India.

Obhrai, a senior advocate hailing from district Jhelum, had actually lived in NWFP since its segregation from Punjab in 1901. In this regard Raghvendra Singh's fascination with NWFP seems curious. Singh hails from eastern India, and is neither a professional historian nor a diplomat. He leaves little clue in the book about what inspired him to attempt such a challenging subject as his first auctorial venture. Singh, an IAS officer (1983; West Bengal), retired as secretary (textiles), Government of India earlier this year. He was reappointed as CEO, museums and cultural spaces. But it must be conceded that Singh has written the book as a person who knows all the ins and outs, and their interrelated threads.

But then again if anything goes against the book it is his same prolificacy. He is an expert speaking to an audience that has little background information on the subject. His text is dense and the footnotes make it denser. The narrative is multi-track and often non-lineal. One has to co-relate several chapters to get the complete picture on an issue, say the referendum in NWFP in 1947. An uninitiated reader might feel like they are swimming in the Oxus, with no coast in sight, while reading this 500-page tome.

What puts the NWFP at a different footing from the rest of Pakistan is that this frontier province, despite being 92 percent Muslim majority, had voted for the Congress in the interim elections of 1946, rather than for the Muslim League. The province could have become an “exclave” of India just as East Bengal was for Pakistan. While the Congress callously abandoned NWFP to its fate, Mohammed Ali Jinnah deployed Iskander Mirza (a former government employee, who later became the President of Pakistan) in a furtive mission to upturn the public mood in the region.

Singh also writes about the British strategic plans for Central and West Asia that led to the creation of Pakistan inclusive of the NWFP. He cites a strategic paper that the India Office, London, had circulated in February 1946 to a select few like Sir Strafford Cripps and A.V. Alexander on the subject of viability of Pakistan. This obviously included the question of the strategic depth of Pakistan.

At the critical moment, Khan Abdul Gaffar Khan failed to take the bull by the horns. He demanded the governor of NWFP be removed, overlooking his real competitors, the Muslim League. Too late in the day, he raised the banner of independent Pakhutunistan, based on the tenets of Islam and democracy, which ultimately ended up helping Jinnah.

The book has several photographs, but not a good map, which remains a flaw. One also felt the need for a chronology of events, which could have acted as ready-reckoner for readers. Overall, it is an interesting book.

The reviewer is an author and independent researcher based in New Delhi. The views expressed here are personal.