The supposed funeral of Netaji Subhas Chandra Bose was held on September 18, 1945, in the cold darkness of a wintry Japanese night. 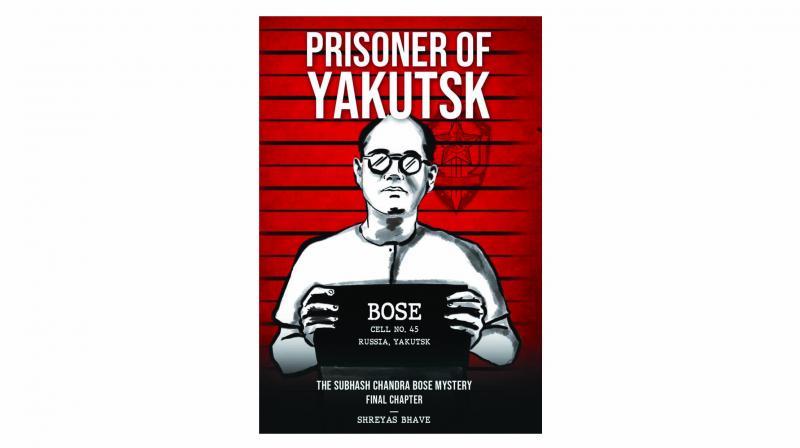 Popular yearning for freedom fighter Netaji Subhas Chandra Bose, leader of the Azad Hind Fauj or the Indian National Army, and the undocumented nature of his death in a plane crash in Japanese-occupied Formosa, now Taiwan, gave rise to a host of conspiracy theories. In Prisoner of Yakutsk, Shreyas Bhave takes the recourse of fiction to rustle up an engaging thriller that imagines a possible denouement. Basing his characters on Captain Gurbaksh Singh Dhillon, Major General Shahnawaz Khan and Colonel Prem Kumar Sahgal, spouse of Captain Lakshmi Sahgal, head of the INA’s Rani Jhansi Regiment, all of whom took part in the INA trials by the British to be released after sentencing, Bhave pens a fictional investigation conducted at the behest of the government by the army’s ex-members into Netaji's disappearance (only Priest Mochizuki of the Renkoji temple is a historical figure). Here is an excerpt.

11 Renkoji /File 6/14/Jan/XVII: Top Secret. 1948: The mission for the search and rescue of Netaji Subhash Chandra Bose began on November 23, 1947. The team flew from New Delhi to the Far East in a cargo plane. It was one of the most secret operations to be ever pulled off in the history of the country. The flight records show they were bound for Singapore.

What the flight plan did not show, however, was that after the refuelling stop at the British colony, they flew on north and did not stop till they landed in the Land of the Rising Sun — Japan.

The supposed funeral of Netaji Subhas Chandra Bose was held on September 18, 1945, in the cold darkness of a wintry Japanese night. The place was a small courtyard in the vicinity of a Shinto temple in Tokyo. The temple, which the locals call Renkoji, has existed since 1594.

Almost two years after the day of the funeral, a group of Indians walked into its compound again. The visitor log records the names clearly.

Major Anish Singh was wearing a long jacket that came to his knees. His wife, wearing an equally long jacket, lined with fur, followed him. Then came a stern-faced Akhtar, wearing a hat, and then the eager duo of Harman and Dinesh. The five of them stood in the courtyard of the temple admiring the architecture of the small but beautiful place. All except Akhtar, around whose neck was slung a fancy looking camera. He immediately held it up and began taking photographs.

Harman was looking distinctly distraught as he gazed at the temple in the centre of the courtyard. “This place is too small!” he said. “Netaji should not be lying in a place like this.” Singh patted him on the back. “You forget that the ashes are not supposed to be his.”

A Japanese priest walked up to them, clutching his robes to prevent them from dragging in the dirt. He went straight to Akhtar and clapped his hands loudly to get his attention. When Akhtar did not respond, the priest went and stood directly in front of him, blocking his view. That got his attention.

Priest Mochizuki looked at the camera with interest in his private chambers. He was an old man with long white hair done in a braid that fell down his back. He wore long robes like the junior priest, though richer in texture and colour. He moved his fingers over the camera, carefully examining it. “I never expected anyone to walk into our humble temple with a Polaroid,” he said in clear English.

“And I never expected an old Japanese priest to know its name,” Akhtar replied, smiling.

Singh stood in a corner, leaning against a wall, watching. “I am certainly an old priest,” Mochizuki laughed, “but I’m an old priest with an interest in cameras.”

“This thing must be a beauty to your eyes then,” Akhtar said.

Mochizuki leaned back in his chair and put on his glasses. “Why are you here?” he asked. “I’m an Indian businessman, in Tokyo on a business visit,” Singh said. “These are my associates.” “And why have you graced our temple?” Mochizuki asked. “We’ve come to pay our respects to the ashes of Netaji Subhas Chandra Bose,” Singh said.

Mochizuki folded his arms. “Have you!” His tone changed drastically.

“So may we pay our respects?”

“He’s a great national hero of yours, isn’t he?”Mochizuki queried. Singh nodded.  Mochizuki cursed in Japanese, slamming his fist on the table. “Why hasn’t anyone from your country come for him then?” he asked, reverting to English.

“You are tourists,” Mochizuki said, making no effort to mask the disgust in his voice. “Why hasn't anyone from your government come to take his ashes back to India?” “Well, India has just achieved independence from the British,” Singh said. “There is much to be done. But someone will surely come.”

“This is not a proper way to treat a national hero,” Mochizuki said angrily, “to leave his ashes in a small temple in a foreign country. You want to see how we treat our national heroes, go visit Imperial Square in Kyoto.”

“We will certainly relay your concerns when we go back,” Akhtar said. “Do so!” Mochizuki said curtly.

The chamber was dark with light coming from only one small window. Singh had expected the ashes to be in an urn, but they were kept in a rectangular box. He watched as Mochizuki lit one lamp at a time, filling the chamber with light.

Singh stood reverentially for a moment, then reminded himself that the ashes did not belong to Netaji.

“Can we see the ashes?”Akhtar asked. “Our culture doesn’t usually allow it,” Mochizuki told him. “But he was not of your culture,” Akhtar reminded him. The reverend had no answer. He remained silent for a while and then said, “Alright, you have come a long way to see him.” He opened the lid of the rectangular box. What was inside made Singh swear softly. He had expected to see ashes, fine and black but what he saw were burnt bones. Akhtar looked amused. “This is how he was brought to me,” Mochizuki said.

After a few moments, the priest placed the lid back on the box and snuffed the lamps one by one as they left the chamber.

I need a smoke,” Akhtar said as they were walking to the car. “I’ll stay with you,” Singh offered. Rupali threw him a warning look but he merely said, “We’ll join you in five minutes.”

The two men leaned against a tree as the others walked on. Akhtar took a slow drag at his cigarette. “We've stumbled on something incredibly ambiguous.” Singh looked at him. "Like what?” “Like the looks the other priests gave us when we left the chamber. Rather, the looks they directed at their head. Something like the look Rupali gave you just now.” “You think he is hiding something?” Singh asked. “No, I'm not saying that.” Akhtar took a last drag and tossed down the butt, grinding it into the ground so nothing remained; an old soldier’s habit. “What I am saying is we should find out.”

Excerpted with permission from the publishers, Leadstart