Beware of that book on your shelf!

The book on one’s shelf at home, somewhat innocuous and a source of pride and joy, is no longer so. 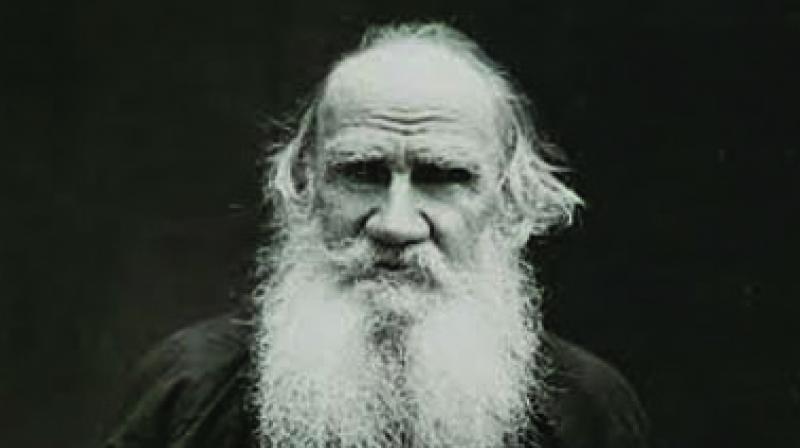 Leo Tolstoy, whose War and Peace sparked off a war of words in a courtroom.

During my programmes to strengthen the readung habit among children, I exhort school teachers to maintain a library at home for even a small collection of books. But they would also need to ensure that a shelf or two would be reserved for children’s books. In this way, children would know that their books too had a defined place in the home and they would know where to access them. I would also request that a part of Sunday mornings be reserved for reading by the entire family. Not necessarily a very long session, an hour at the most but it was essential to establish that reading mattered to the family. Young children usually followed by precept and example. If parents could be seen to be reading, the children too might readily pick up their books to read alongside their parents. What a wonderful idea I thought and my audience too readily agreed, if the family could be seen to read together. In the course of reading, the children might come across some unknown words or even a difficult passage, and what better resource than the parents readlily at hand to explain? To underscore the importance of reading together at home, I concluded rather dramatically, that “a family that reads together stays together”.

Now suddenly all this in grave danger. The book on one’s shelf at home, somewhat innocuous and a source of pride and joy, is no longer so. Indeed, we are now told, the book on one’s shelf can be dangerous and subversive. The recent seizure by the Pune police of Tolstoy’s classic War and Peace from the house of an accused along with other “subversive” literature has raised eyebrows across the literary world. The news sent me along with other book lovers scurrying to our bookshelves. My wife was perplexed to find me hunting frantically among the shelves of our modest library but was happy that some “spring cleaning” was at last being done! When I explained that I did not want to be detained under the Unlawful Activities (Prevention) Act, she too aided me in my search. The offending book was duly located and secreted away with my wife throwing in Tolstoy’s Anna Karenina too for good measure. “You never know,” she said, “Tolstoy has now come under the baleful gaze of the law.”

The learned judge before whom the police dutifully submitted all the seized literature, documents and CDs, stated later that he had indeed recognised War and Peace as a classic. His gaze was not on this at all but on another War and Peace, apparently a collection of subversive essays edited by one Biswajit Roy. Unfortunately, the judge had already queried the accused Vernon Gonsalves on Tolstoy’s War and Peace asking him why on earth would he like to read about war having been fought in another country. In addition, the learned judge had also asked the police if they had read all the material they had seized including the material on the CDs. The police needed to read all the material and conclude that they were indeed “subversive” before they could bring charges against the accused.

Just as I was happy and about to thank the learned judge for promoting the “reading habit” among the police, he denied his statements and said that he had been misquoted by the press. A rumour that he had found a copy of Tolstoy’s War and Peace at home was similarly denied too. Tolstoy’s War and Peace is indeed a classic and was a veritable tome for all readers in their later school years and early college days. Many did not finish it and were happy to see the film version made later. Tolstoy inspired Gandhi who dedicated his ashram in Phoenix farm to him. When Jeff Bezos launched Amazon’s first version of the Kindle at the Jacob Javits Centre in New York City in 2007, the advertisement read “you can read War and Peace in the bathtub!” testifying to how heavy the book was and how effortless was its reading on the new device. While there was no answer to the question as to how long this would take, it was understood that this would not be in one sitting, for the bathwater would run cold. To the more important question that would the then version of the Kindle survive a fall in the tub, assuming the print book would, there was no ready answer!

Today, a quick word count of the e-book version of War and Peace reveals that the book has 587,287 words, Tolstoy himself not being sure of what it was “a novel, a poem, a historical chronicle”. He was to be equally amazed at its reception in the literary world. The digital version also gives us a side benefit of technology. It’s now possible to prepare a sanitised version of War and Peace by asking the computer to delete all references to “war” in the book and retaining only “peace”. Such a version may then be placed, without repercussions, among our bookshelves.

We would all now need to have a re-look at the books on our shelves which by itself is not a bad thing. Henry Petroski has written a very readable account of the history of books and bookshelves The Book on the Bookshelf. Petroski says, “It’s a natural law that books will outgrow shelf-space originally meant to house them.” This will, in itself, lead on to a bit of that necessary spring-cleaning. But “sanitizing” our shelves means more than this. The history of reading shows that attempts to censor what we read are inevitably doomed to failure.

Can books indeed be considered dangerous and subversive? The late Abdul Kalam wrote a book Ignited Minds but surely, the purpose was not subversive! There’s a hilarious reference in the writer and playwright Alan Bennett’s The Uncommon Reader where her majesty Queen Elizabeth reading Anita Brookner while on her way to Parliament, returns to find her book missing. She finds that the security staff had removed the book thinking it might be a device that could explode! “But it was only Anita Brookner,” remonstrates the Queen!

At Chennai airport, I was once stopped by the security asking if the book I was carrying had been security checked. I had to go back and put it through the machine but I was pleasantly surprised by the staff at the other end. The book was The Secret Life of Houdini, the Hungarian legend. “He excelled at the art of getting out of locked cells, didn’t he,” asked the security man, looking at me curiously.

Perhaps one way to make our books fit firmly into their shelves and also perhaps divert “curious” minds is an incident cited by Alberto Manguel, the Argentinian writer, the owner of a modest library of 30,000 books! His father an ambassador of Argentina was due to return home from a foreign posting. He had ordered bookshelves to be added to his library to house his now expanded collection of books. An energetic housekeeper employed a host of carpenters to do the job. Her master then sent the books to be shelved before his arrival. When the books arrived, the housekeeper found to her consternation, that some of the books were too big for the shelves and didn’t quite fit. No matter, thought the resourceful housekeeper. She got book binders to trim the pages and rebind the books. They now all fitted the shelves so perfectly. “We had a hilarious time as children,” says Manguel, “trying to guess the missing lines at the bottom of every page!”

When the writer Khushwant Singh revised his two-volume A History of the Sikhs for the OUP, he added a reference to the exiled leader of the Khalistan movement Jasjit Singh Chauhan. Singh, not a great votary of the movement and still less of its self-styled leader, made a reference in volume two that Chauhan could not be a Sikh leader for he had not worn the traditional turban and other Sikh accoutrements considered essential to the faith. Chauhan and his followers filed a case against both the author and the publisher for defamation on the grounds that there was no empirical evidence to prove this. The author had merely stated that this was a well-known fact in Chandigarh. The Indian court pending appeal and final disposal by a British court (for Chauhan was in self-exile in England)  asked OUP in India to stop distribution of the second volume and recall all copies. This was done and returned copies were acknowledged by registered post and, for some time, I kept some copies of the offending volume under lock and key in my office and some at home thought not on my bookshelves!

The case was settled by an English magistrate who ruled that Chauhan had indeed been defamed, levied a fine of one pound on the publisher and dismissed the case! The book was reprinted with the offending sentence removed. We pulped all the earlier copies. If the OUP can retrieve a file copy today, it might well be a “collector’s item”.