Ayres needs no introduction to those who follow international affairs. 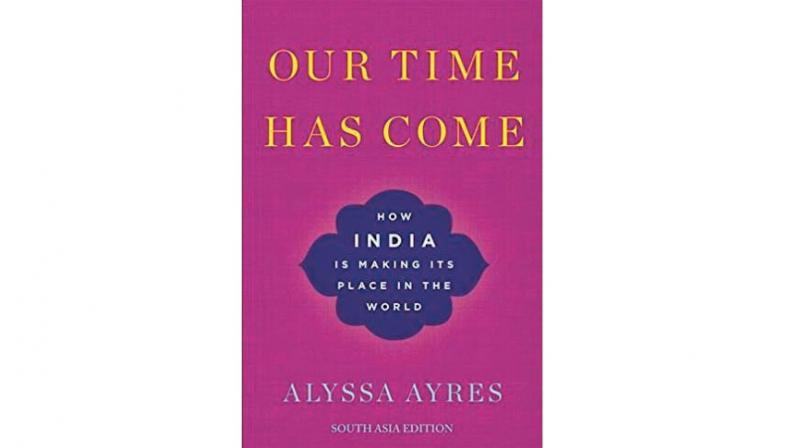 Our Time Has Come: How India is Making Its place in The World by Alyssa Ayres OUP, pp 360 Rs 695.

India’s sense of destiny and its quest for greater global prominence has spawned a cottage industry of books which can be categorised as good, bad and indifferent. Another book on India always runs the risk of becoming part of the “me too” clutter. One sign that the book has something new to say on familiar themes is its ability to engage even a reader like me who doesn’t focus on strategic affairs 24/7. I finished reading Our Time Has Come: How India is Making Its Place in the World by Alyssa Ayres at one go with hardly any breaks. As a reviewer, that was one marker of the book’s ability to sustain the interest of a general reader, even when it goes over familiar ground.

Ayres needs no introduction to those who follow international affairs. She is a senior fellow for India, Pakistan, and South Asia at the Council of Foreign Relations, Washington, and has been coming to India since 1990. That she is familiar with India’s myriad complexities and paradoxes is expected. But what is most interesting about her 300-pages plus book, primarily targetted at the American reader, is how she uses India’s fabled complexity to make the case that despite several domestic challenges that remain and despite the hurdles India still has left to clear, India has already become a consequential global actor, a major rising power of Asia, and that the country deserves to be better understood and better appreciated on its own terms.

Ayres starts from a basic premise. Or rather two, both of equal weightage. One, that Washington doesn’t have a template for a country which is as fiercely independent as India. Two, that as she writes in her prologue, “It’s time to get used to the fact that while India still struggles at home with poverty and a plethora of social issues —and likely will continue to for the foreseeable future — it is less and less reticent about its global ambitions.” More significantly, “Despite the hurdles India still has left to clear, India has already become a consequential global actor.”

Given this backdrop, what should India and the United States do? Ayres’ pragmatic response — align without necessarily being aligned to, view the relation more as a “joint venture than a traditional alliance”, as Ayres observed while speaking recently to a distinguished gathering at New Delhi’s Centre for Policy Research.

“My book is intended for a primarily American readership, a reader unlikely to know much about India and likely to see India largely through the lens of India’s many well-known domestic challenges. I believe that it is incumbent upon Americans to better grasp the many important changes taking place with India’s global role, and to appreciate that fully — rather than dismissing India’s global relevance because the country continues to struggle with poverty, insufficient infrastructure, social cleavages, and other issues,” Ayres told me.

But if India’s domestic challenges do not necessarily constrain the country from carving out a larger role for itself globally, as Ayres observes, what incentive is there for the country’s policymakers to push for change? “By urging Americans to see India in its totality, not just limited to its domestic problems, by no means, suggest that Indian political leaders and policymakers should abandon their pursuit of economic growth and better delivery of the services and programmes a government ought to provide its citizens,” she responds.

“India’s political leaders have an obligation to the citizens of India who elect them to office, to work for the goals they were elected to deliver. It’s the voters who have the power to send politicians packing, and that is the best incentive of all for leaders to continue addressing the many domestic development challenges still before India today. What New Delhi seeks to do on the world stage as a global power remains a work in progress.”

Ayres’ book offers the sympathetic outsider’s insights about the process as Indian citizens make their country’s place in the world. In an email, Ayres wrote why she feels the need to explain India’s point of view to an American reader. “I have tried to explain, for an American reader, why India values the preservation of all its choices to the extent that Indian foreign policy strategists have seen alliances as constraining rather than enabling relationships. Some countries have seen their alliances with the United States — and the mutual obligations that come with that formal treaty status — as helpful to their own security and enabling them to pursue their own national interests. The Indian foreign policy view has been that such obligations constrain future options. This is neither a question of right nor wrong. It is, however, not the same framework as the types of relationships Washington has with our treaty allies, so I have spent considerable time in the book explaining this for an American reader.”

One of the most insightful chapters in the book is the one which asks the very topical question: How the United States should work with a rising India? The short answer is, “Align without being aligned.”

India has become a closer partner of the United States in recent years, especially the past decade. Trade and investment links are flourishing. The military and political bonds are perhaps stronger now than before.

However, as Ayres points out, “Convergence does not mean that Indian policymakers suddenly see themselves in a supporting and instrumental role for American strategic objectives. Understanding this distinction is a fundamental part of appreciating India’s approach to its Asia-Pacific goals, which include protecting its own primacy in the Indian Ocean and preserving the principle of freedom of navigation.”

It is this undercurrent of realism in all the eight chapters in the book which resonated the most with this reviewer.

Ayres’ latest book is primarily aimed at acquainting American readers with Asia’s third-largest economy. But it is also a must-read for Indians and others interested in how this country is making its place in the modern world and how the process is viewed by an astute India-watcher.