Vineet Bajpai’s Harappa trilogy is a perfect mix of history, fiction and crime

India, with its rich culture and unmatched heritage has a veritable treasure of stories just waiting to be told. 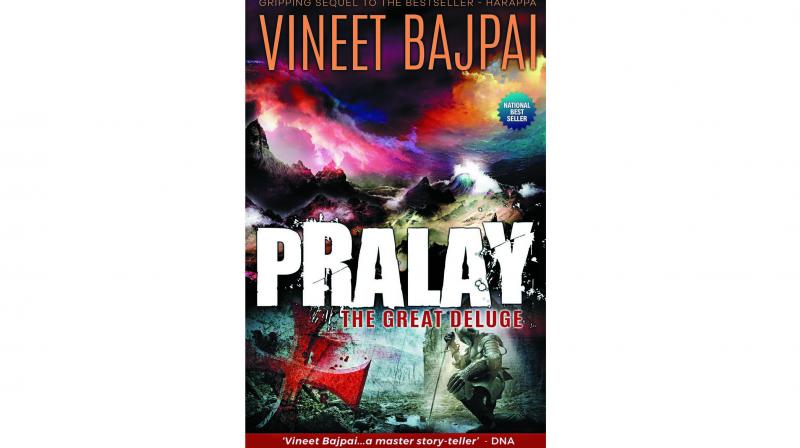 Harappa, Pralay and now Kashi – author Vineet Bajpai’s trilogy has taken the country by storm. A series of three books that defy classification – with its mix of history, fiction, fantasy, religion, intrigue, mythology and crime…a reader could barely ask for more in any one series. India, with its rich culture and unmatched heritage has a veritable treasure of stories just waiting to be told. Off late, many authors have gone down this path. So, what is it about the Harappa trilogy that sets it apart from the rest? What has made it an instant bestseller and given it almost a cult-status (a quick glimpse of its reviews online would elucidate this point)? This is what we will attempt to discover in this review of the three books.

This is a story spanning two timelines, 1700 BCE Harappa and 2017 Banaras, with snippets from various other timelines woven into them. The first story is one of Vivasvan Pujari, and his son Satyavrata Manu. This is a story of human greed, the abject blindness of the evil and that of raw courage; of sacrifice and of the bravery of the forces of Good. It is also a story of the folly of anger, and the falling of a wronged demi-God to human status due to it, from which flows the rest of the story. The author succeeds in pulling out both the darkness as well as the light that resides in human hearts.

Vivasvan Pujari, the designated chief priest and demi-God of Harappa, as a result of being grievously betrayed by those he once trusted, is consumed with his desire for revenge. The story during this timeline in 1700 BCE, centred around the ancient metropolis of Harappa, revolves around how Vivasvan Pujari rises from the ashes to wreak retribution on the magnificent city and its people. It is a captivating story of hate, of rage, of greed, of unbridled ambition – and their cataclysmic outcomes. The author has succeeded in knitting a complex story with dexterity and introduces complex characters, each with his or her shade of grey. 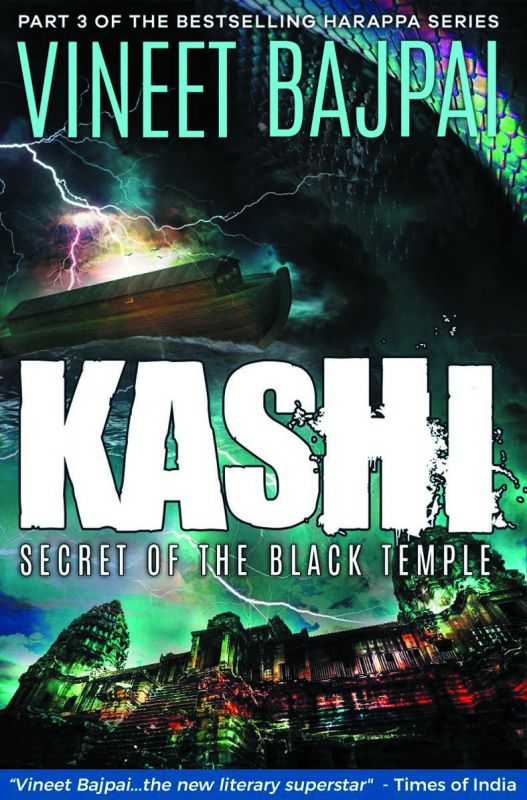 The grandmaster of a medieval matth in Kashi, a strapping young man Satyavrata Manu who emerges as the saviour of humankind, an extinction level great flood, cannibals and taantrics, Gods and demons...you have it all in this racy trilogy.

The modern timeline is around a young, Delhi-based entrepreneur, Vidyut Shastri, and his great grandfather Dwarka Shastri, who is the 108-year-old chieftain of a haunting, mysterious monastery in Banaras. Vidyut, prophesied to be the last devta on planet earth, has been kept away from Kashi for a reason – his bloodline bears a chilling, primordial curse.

Complicating factors are the presence of an equally ancient order of evil that has a nefarious design for the entire human race…and the secret to which only Vidyut holds the key. An ancient prophecy, a giant Ark, a barbarian king, a woman in love, a religious cult, the 14th century Black Plague, the East India Company, a sinister global brotherhood and the great Aryan-invasion debate...you will find all this and more in this trilogy. 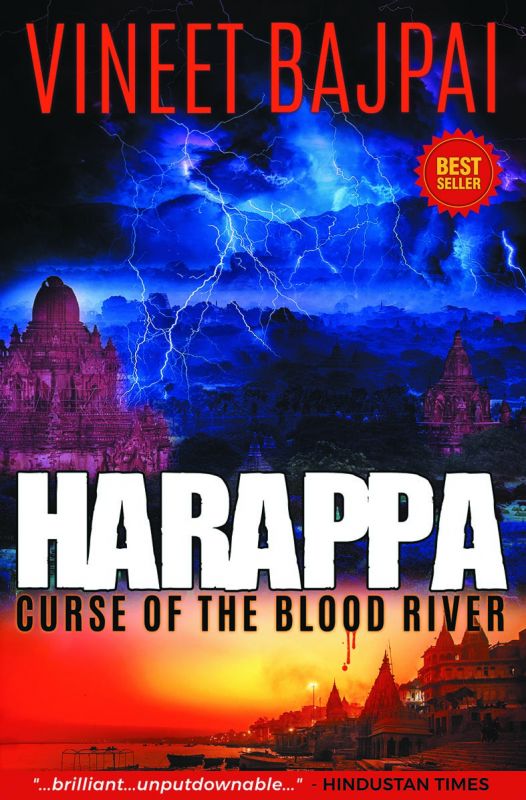 First-  the classification; this trilogy can be classified under the mythological fiction and fantasy genre due to the presentation of main characters as nearly supernatural, and the rich dose of black magic, of curses and of demons and gods. That said – the overall gist and significant portions of the books have strong factual underpinning. For example, the Aryan migration theory, and its rebuttal is reasonably justified; as is the hint at fictionalization of Indian history by western historians. Therefore, in that sense the book is also correctly aligned with historical thrillers.

The most attractive aspect of this series is that the characters, their personalities and their overall plotting blends seamlessly across the three books. In fact, the characters get more strongly defined with each book, with much better clarity, clearly defined edges, shades and etches. Further, this is not a one or two-character story; there are four or five very strongly defined characters with strong roles, which makes for a classic tale. This aspect also enhances reading pleasure, as the story is not a superhero story, but rather that of a human effort of good against evil, just as laid out in the rich Indian scriptures and ancient tales, when Avatars fought beside and with humans.

But above all of this, is the imagination of the author and his superb skill in mixing several ancient histories to create one magnificent vision of an imaginary land. And if you take the time to ponder over some segments, lines or statements, you are sure to find pearls of wisdom like this one – It is in the times of the starkest adversity that a true leader of men stands tall, above material greed, above individual preservation, and even above the fear of grave personal loss...

How do you manage the two lives you have, one as an entrepreneur and another as a writer?
To be honest, I feel I am blessed to have this combination of building companies and writing books available to me. Both these aspects of my work-life offer a very different channel to my executive and creative energies. As the Chairman of the Magnon Group, which is part of the Fortune 200 Omnicom network, I get the opportunity to discover and grow the corporate leader in myself. With talentrack, an exciting new start-up we are building in the media & entertainment sector, I am able to deploy the energetic, hungry entrepreneur in me. And finally writing allows me a beautiful canvas to express the creative facet of my personality.

That you also write non-fiction is lesser known to your fiction fans. So, your non-fiction work, was it a motivator, or a catalyst for the shift to fiction?
My non-fiction writing in the business and inspirational space began with my entrepreneurial journey. I was only 25 when I wrote my first book Build From Scratch, which is even today a useful companion to many aspiring and young entrepreneurs. I wrote that book because despite hailing from a non-business family and with next to nil financial capital, I had succeeded in building a small but successful company very early in my career. I felt a strong urge to share my journey with other entrepreneurs, so they don’t have to reinvent the wheel. Thereafter, I wrote two more business books. However, over all these years I felt there was a story-teller in me waiting to emerge. The Harappa Trilogy gave me an opportunity to bring out that side of my writing. And I am so glad that happened.

Your fiction theme – how did you chance upon this fusion world you have created, a fascinating mix of Eastern and Western beliefs, adroitly and tastefully mixing these two to create one world?
To be very honest, even I am blown away with what the Harappa Trilogy has turned out to be. Today as I look back, I feel as if Maa Saraswati herself came and blessed my words. It all started with my desire to write a thrilling tale around the mysteries of the Indus Valley Civilisation, the great Aryan debate, the vanishing of the mystical Saraswati river and more. How it all blended with a racy, modern-day thriller in parallel was a magical experience for me as well. The thousands of mails and messages I am getting from my readers is a glowing testimony to the love the Harappa Trilogy is receiving.

The approach you have taken seems to be very consciously chosen to tell the Indian story, avoiding Western stereotypes and going deep into our culture. If so, tell us your thoughts on this.

You are absolutely right. While there are many views and opinions on this matter, I do firmly believe that a significant part of the history taught to us in our schools has deep Western influences. And like the old saying goes, history is written by those who have hanged heroes. For example, the Aryan-invasion theory of blue-eyed, white-skinned riders galloping through the Khyber has been documented and repeated so many times that it almost became the accepted truth! But when you really research deeper, you would realise that there is hardly any scientific or archaeological evidence to support this theory. Having said that, please do bear in mind that I am a story-teller and not a historian.

Do you think so far our culture has been properly tapped into for good story-telling to the audience?
Yes, in recent times I would say a lot of good work is being done in this genre. Several high-quality writers are producing praise-worthy work. Unfortunately, some of the work coming out is also sub-optimal, but that happens with every art-form, whether it is literature, painting, music or film-making.

Did you expect the Harappa Trilogy to become as big as it has? How has this made a difference to you professionally & personally?
While we always had deep conviction that Harappa, and then its sequel Pralay and finally the last part of the Trilogy, Kashi were winning manuscripts, we did not foresee the spectacular response the books have enjoyed since the first release of Harappa. All three books have been ranking high in all best-seller charts. In fact, Pralay topped the HT-Nielsen best-seller list as India’s number-one fiction novel. Kashi emerged as an online best-seller in its pre-order stage itself – selling several thousand even before a single copy of the book was printed! So yes, the response has been overwhelming and it has been one of the most gratifying phases of my life. Love pouring in from tens of thousands of readers from all over the country is my greatest reward.

What are your future writing plans after the current series draws to a close – fiction as well as non-fiction? What can your fans look forward to? Any chances for the series to be extended?
I don’t think my readers will allow me to conclude the Harappa series so easily! (Laughs). I am inundated with mails and messages urging me to continue the series.
Those who have read Kashi, the last part of the trilogy, would know that the ground has been set for another sequel or perhaps sequels. We should release that by the end of 2019 or early 2020. Before that, I am working on a novel set in the backdrop of the Great Mutiny of 1857. That book, tentatively titled Mastaan, should be released by mid-2019.

Vishal V. Kale is a blogger on Spirituality, Indian History, Indian Business and Economy; India's Top Blogger 2014-2018 and a professional who has spent 17 years in the corporate sector