Books   05 Aug 2018  A leisurely journey through Pak’s past, present and future
Books

A leisurely journey through Pak’s past, present and future

On hearing from him after long, Paracha mailed Anthony asking him to bring his guitar the next time he visited Pakistan. 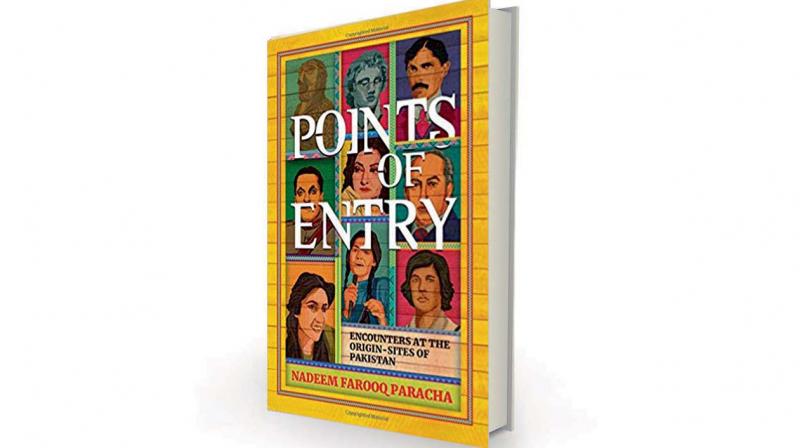 Can you tell the story of an entire nation, the history, culture, religion and politics of its people, through a simple recall of your own lived experience? Yes, you can. Only if you have knocked around in life, accumulated a repertoire of rich experience engaging with others with an open heart and mind, are blessed with the art of story-telling.

Meet Pakistan’s Nadeem Farooq Paracha, cultural critic, historian, columnist and author of Points of Entry. The sub-title of the book, Paracha’s Encounters at the Origin — Sites of Pakistan suggests what it’s all about. The travelogue in fact is a series of essays on the country’s history, politics and society. For the most part Paracha is only a narrator (sutradhar), the story is told by the people he encounters.

Set aside a weekend, join the author on a leisurely journey through Pakistan’s past, present and future. Allow him to introduce you to the multi-layered Pakistan that the daily news tells you little about.

Meet an out-of-job 60-year old guide, an unnamed Sindhi Muslim, wasting time on a heap of ancient bricks in the ruins of Mohenjo-daro, one of the oldest settlements in the Indus Valley Civilisation, built around 5,000 years ago and abandoned 2,000 years later, located west of the Indus river in Sindh’s present day Larkana district.

“The river Indus (Sindhu) gave birth to this place, which gave birth to India and then Pakistan,” the guide tells Paracha. “What about the Arabs?” quips Paracha, in an obvious reference to the Arab warrior Mohammed-bin-Qasim, the “first Pakistani” to whom, according to Pakistan’s official folklore, goes the credit of giving birth to Pakistan 1,300 years ago. “He was our guest”, is the prompt response from the Muslim guide who proudly claims his ancestry to Sindh’s Hindu ruler, Raja Daher who was defeated by Qasim.

“Sain, he (Daher) was here before them (the Arabs)… Daher’s ancestors were from here (Mohenjo-daro). And so were the ancestors of you and me. We all are older than the Arabs. Kya samjhe, Sain?”

Next travel up north to the land of the Pashtuns, a people often much fairer and have green or blue eyes, very unlike those from the rest of the country. Listen to Noor from Multan in southern Pakistan proudly proclaim that he has Yunani khoon (Greek blood). The man is bent on travelling way up north to the stunningly beautiful Swat valley (home to Nobel Prize laureate Malala Yousafzai) in Khyber Pakhtunkhwa to marry a girl with Yunani khoon. Paracha will tell you various studies have shown that “a majority of Pashtuns are the descendents of the marriages between local women and Alexander’s soldiers”.

A five hour bus ride from Swat will take you to villages sprawling with ancient Buddhist cites. For Tibetan Buddhists, here is where Padmasambhava, believed to be a reincarnation of Gautam Buddha took birth on “a lotus leaf which was floating on Lake Dhanakosha”. From the first millennium BCE till the 8th century CE this region was dominated by Buddhist dynasties.

Back in Karachi, meet up with members who are among the city’s oldest ethnic groups, the dark-skinned men and women, locally known as Siddhi or Shiddhi, now referred to as “Afro Pakistanis”. Currently numbering around 2.5 lakh people, some of them arrived as part of Mohammed-bin-Qasim’s army. A much larger number are believed to have been brought there as slaves from north Africa by Portuguese traders and explorers in the 16th century.

Then there are the Goan Christians and other “Luso Indians” who migrated to Karachi in the early 20th century. To these Christians goes the credit of running many of the city’s top schools and colleges. No less important, they are the ones who introduced rock, pop and jazz bands to Pakistan.

You get the picture? As part of undivided India, what is today Pakistan had a rich multi-cultural, multi-lingual, multi-religious heritage to be proud of. But that’s not how things are in present-day Pakistan. Mohammed Ali Jinnah had claimed at the birth of Pakistan that the nation he helped create in the name of Muslims (“a separate nation”) will be a secular state. But he died a year later and within months the state resolved to build an Islam-compliant state.

A chapter in the book is titled, “My name is Pakistan and I’m not an Arab”. The idea that Sindh (after its invasion by Qasim) is “the first Islamic province in South Asia”, first floated by state-funded archaeologists in the early 1950s, was aggressively promoted by the Zia-ul Haq dictatorship (1977-1988) as part of his Islamisation agenda. “It sought to ‘explain’ Pakistan as a notion that had deep roots in the ancient deserts of Arabia though its geographical location was in the congested expanses of South Asia,” writes Paracha.

The author cites the example of a Pakistani-American lad who, keen to settle the ancestry issue, got his DNA tested in 2016. The results showed that he was 97 per cent South Asian and had zero per cent Middle Eastern ancestry.

Take a ferry ride with Paracha from Makkad, his ancestral town in Punjab province down the Indus river. Listen to Yaqub, the ferry owner, sing the revered Sufi saint Bulleh Shah’s composition, Bullah Ki Janaa Mi Kaun (Bullah, even to me I am unknown), a critical lament against religious orthodoxy.

Many of the Goan Christians who brought soulful music to Pakistan were forced to leave the country, migrating to the US, Canada and elsewhere. Anthony, a college time pal of Paracha, was one such. On hearing from him after long, Paracha mailed Anthony asking him to bring his guitar the next time he visited Pakistan. Pat came the reply, “NFP, one doesn’t need a guitar anymore in Karachi. One needs a gun. And I have none”.