Seven wordsmiths work the magic of the poetic tongue

Subtle turns of phrase and immediacy in her verse draw the unsuspecting readers into her intimate worldview. 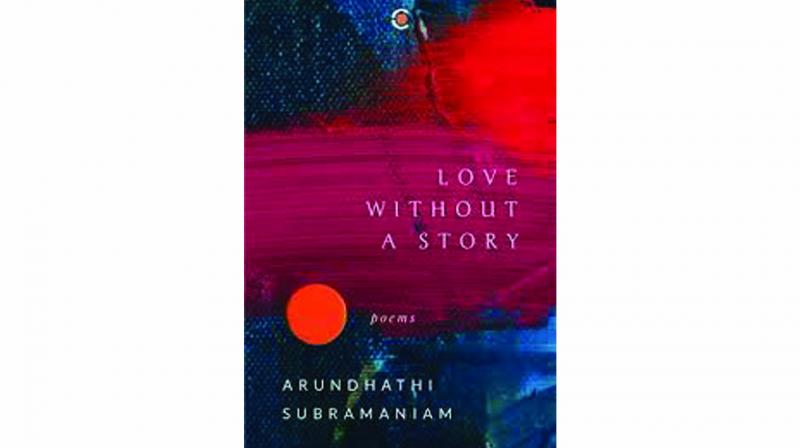 Love without a story, By Arundhati Subramaniam Context/Westland pp.107, Rs 499.

The tongue is alone and tethered in its mouth,” wrote John Berger. It is in “the ways of seeing”, and in the ways words and mother tongues are articulated that the essential spine of poetry is formed. In a poem titled ‘Tongue’ by Arundhati Subramaniam in her latest collection Love Without a Story (Context/Westland) —her fourth book of poems to date — she writes: “The man in front of me / is reading / a balance sheet. // He is smiling, his gaze / shimmying between columns, / effortlessly / bilingual.” Her new poetry is marked by a sense of familial intimacy and kinship, by a quest for a secular god and faith, one that is “animated by dialogue and dissent, delirium and silence”.

Her last book, When God is a Traveller — the first three being On Cleaning Bookshelves, Where I Live, and New & Selected Poems — contained “poems of wonder and precarious elation, about learning to embrace the seemingly disparate landscapes of hermitage and court, the seemingly diverse addresses of mystery and clarity, disruption and stillness”. Subramaniam’s poetry is marked by the clever way she brings alive the quotidian with wit and wry humour in a language that is lucid and unpretentious.

Subtle turns of phrase and immediacy in her verse draw the unsuspecting readers into her intimate worldview. Her poem, ‘Sharecropping’, is a good example of the above. Here are the opening two stanzas: “I’m wearing my mother's sari, / her blood group, / her osteo-arthritic knee. // We've voted / for different men, same governments.” In the poem, ‘Bhakti (with some adulteration)’, she declares in a bold, empowered tone: “Allow me / some deluxe delusions. // Allow me to uncork you / … / so I can steal a whiff, / a whiff, no more, / of your crazy liquor. // Decant into my hipflask. Settle down into my pocket. Stay illicit.” An understated feminism underpins much of her poetry. 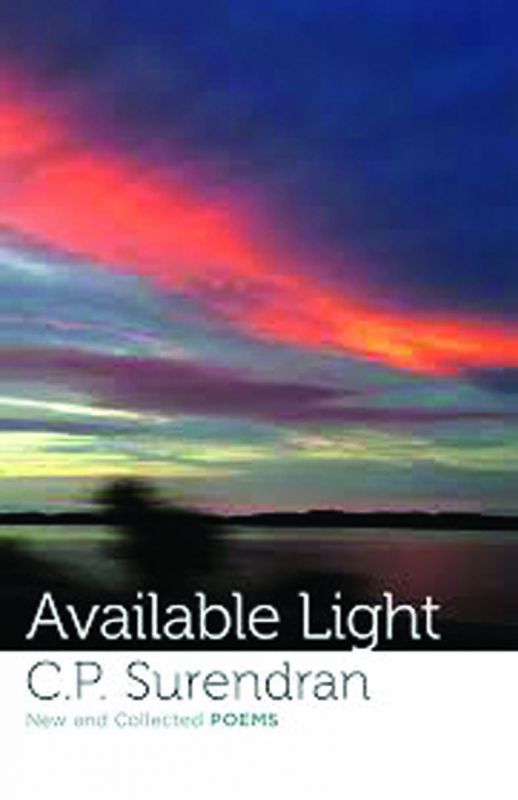 Consider a poem like ‘Engagement”: “A ring of cloud / Slipping down / the finger / Of a cliff.” Or a even poem like ‘The End of an Affair’:  “The wind reads water well, / Ripple and swell; / Spreads your hair like a veil / Over the moon. / Your promises, / Like secrets, / Are not kept; / The night, spotted / With stars, crouches, / Like a leopard / Before it leapt.” No room for soppy emotionality in his work —just studied restraint that is balanced delicately with deft linguistic control and panache.

“The wrecking of your bed. / Who lay here warming the teak but you, / And my mother years ago when I fled / Towards my fate. // At the cross-roads between dreams / And memory, amber and red glow lights / Of eternity. There I killed the king, // Blind before and after.” (‘As Kill a King’). Politics, despair, love, betrayal, and most importantly, a wry sense of humour and irony underpin his broad latitude of work across all genres. “The somewhere-sea is here / Beyond belief; blue, deep as ink. // She falls at your feet again and again, / Having brought you to the brink.” (‘Wordless’). Available Light is an important volume of “new and collected poems” by one of India’s finest contemporary poets.

Two Full Moons (Bombaykala) is Vinita Agrawal’s fourth book of poetry and her most mature to date. It is a book of “self-exploration and discovery. It seeks to find the universal in the personal”. The poems explore with passion and intensity, aspects of “existence”, “soul”, “heart”, “world”, “women”, “family”, and the very urgent issues of “mental health”. In ‘Dementia’, “Her home — / a bare garden // she / a corner gardener // brooding over / rooms of shadow // and smears of grey / on black corded drains // gently dipping / the branches of her body // in the singing / of a crow.” The language here is appropriately spare and lean, and the atmosphere full of eerie silence. Elsewhere in the poem ‘Blue’, she swallows “the sky / just to feel its destitution”. Writing about mental health dispassionately is a hard task, but Agrawal does it with aplomb. It is her control with language and distilled emotion that allows her to do that so successfully, balancing deftly the yin-yang of lunar vicissitudes.

Amlanjyoti Goswami’s River Wedding (Poetrywala) brings an intelligent and reasoned voice to Indian poetry. Widely published in literary journals and magazine, this first book of over 100 pages explores aspects of modern society, its people and places, its politics and complexities, and the joyous wonderment of fatherhood. The title poem, ‘River Wedding’ remarkably explores myth and folklore with a sense of humour: “Ma is afraid of water after dark. / Not the glass or jug, but the pumping station / Across the street.” According to local lore, “All the rivers would come” for a “river wedding” — “flow through their village” with “rain and thunder”, making Ma wonder “if the water station / Keeps the those rivers, bottled”.

“I had to clean myself / But before the first drop from the nozzle fell, / The wetness of your tongue was on my palm / The rest was all ritual — … . / When I turned west and announced I would offer him / My prayers, God knew I wasn’t fooling him.” (‘Namaaz’). This is just one example from Shalim M. Hussain’s excellent first book, Betel Nut City (RLFPA Editions). Here is a young poetic voice that explores Islam and modernity, set in the landscape of India’s North East where “hills melt like jaggery”. Hussain’s language is assured, alive and unabashed. ‘Have you ever, just licked a Raisin?’: “Have you held it / in / your mouth / and felt it swell to a / grape?”

Saima Afreen’s Sin of Semantics (Copper Coin) is redolent with sparkling similes and metaphors. Her phrase making is precise, her sense of music understated, and her word choice uncomplicated. ‘On the Banks of the River Krishna’ “is salt / I had exchanged with the sea / prisms catch the granules / bringing to my toes / offerings of Satavahanas, ….” Elsewhere in ‘A Junkyard Full of Lilies’ “of all lights / the flicker of a mellow sun is the sweetest / unpacked, raw like warm honey flowing on your lips / golden.” Afreen is an imagistic poet who controls the nerve strings of all sensory elements with a deft hand. This is a fine debut collection of poetry.

Go Talk to the River: The Ovis of Bahinabai Choudhuri (Yoda) is excellently translated from the Marathi (Ahirani) original by the poet Anjali Purohit. Bahinabai (1880-1951) was named after a 17th century saint who composed abhanga verse. The poetry is about the everyday, about a woman’s life and role in it, about relationships, financial hardships, and rural countryside. The poems are presented both in Marathi using the Romanised script along with its modern English translations on the facing page. One can see and feel in Purohit’s well-crafted translations, the texture and flavour of the original language, which is at the same time rendered in precise conversational English. The woman’s voice is shot through with power: “Arrey! Look, who I am! Who I am! / I have God’s name on my lips! / then the atma residing within says, ‘Then why / don’t you go and ask your tongue what it speaks.’”

Poetry comes back full circle to the magic of the “tongue” — a palette where sound originates; a place where sound become words, both spoken and written; where words in a poetic register sing resonantly in various tongues.

Sudeep Sen [www.sudeepsen.org] is an award-winning poet, translator, editor and photographer; whose most recent book is Kaifi Azmi: Poems|Nazms (Bloomsbury)