Hyderabad-based Jatin Gupta explores an enthralling tale of mythology and fantasy in his debut fiction, Kali Yuga: The Ascension. 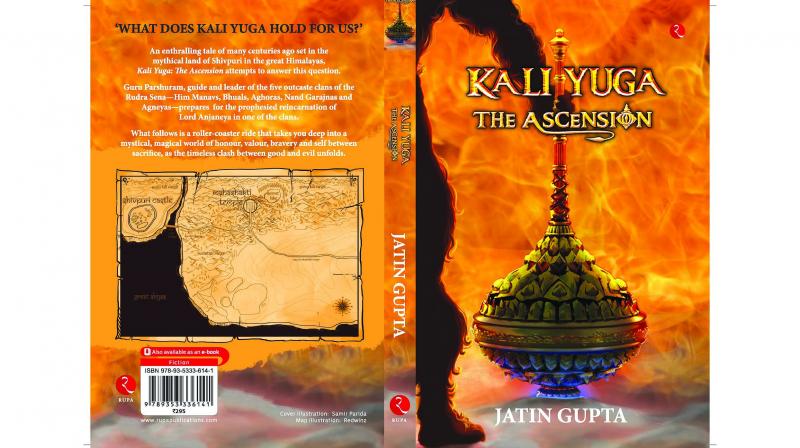 Set in the mythical land of Shivpuri in the great Himalayas, Kali Yuga: The Ascension, by Hyderabad-based author Jatin Gupta sets out to explore the enthralling tale of mythology and fantasy. The plot revolves around Guru Parshuram who is the guide and leader of the five outcast clans of the Rudra Sena — Him Manavs, Bhuals, Aghoras, Nand Garajnas and Agneyas — preparing for the prophesied reincarnation of Lord Anjaneya in one of the clans. As the story unfolds, the rollercoaster ride takes the readers deep into a mystical, magical world of honour, valour, bravery and self-sacrifice.

Jatin, who heads the business operations at a leading gaming company in Hyderabad, has already a published one self-help book in 2018, Winning like Saina: Think & Succeed like Nehwal. However, a fiction being quite unlike a non-fiction, Jatin goes on to share with us his inspiration for Kali Yuga. “Nowadays, most content available online deals with either zombie apocalypse or how the world is ending,” says Jatin. “Even in our mythological scripts, end of the world does have a mention such as the yugs. So taking that as a point of reference, I wanted to tell a better and Indian version of the end of the world. This book revolves around the cycle of life.”

The facts of a fiction

Interestingly though, the idea for Kali Yuga germinated in 2014, much before Jatin published Winning Like Saina, although owing to some untoward situations, his fiction happened to get published much later.

Comparing the work involved in his earlier publication vis-a-vis the recent one, the management professional with over fifteen years of experience in consumer product, consulting, financial services and the gaming industry, tells us that while writing the self-help book, he had to stick to facts. “But with Kali Yuga, I had the liberty to play around and create a visually attracting piece of work,” he adds.

But the creative license was innate in him, for even as a child, Jatin tells us, he was very creative and had all sorts of fantasy stories he hoped to narrate. “My father was in the navy because of which I led a rather nomadic lifestyle, with fewer friends and books and comics to keep me company,” he shares.

Surprisingly, quite unlike many others in his field, Jatin hasn’t yet faced any writer’s block. In fact, one primary challenge Jatin faced was the need to curb his creativity and to stick to one line of work. “I had multiple options going on in my mind as the story premise, and it was difficult for me to stick to one. As for not experiencing a writer’s block yet, I guess once I publish eight to nine books, I might face that, too,” he explains with a chuckle. But a writer’s block is far from his mind because Jatin, who finished his graduation and post-graduation from Delhi before moving to Hyderabad for professional reasons, is presently all buoyed by the sale of 2,500 copies of his fiction in its debut month. A traveller at heart, who handled various leadership positions with different organisations, Jatin at the moment is planning to write the second part of the Kali Yuga series.