Big-hearted effort to give the Tamil dream its due

The Jallikattu protests in Chennai’s Marina Beach brought attention to, among other things, the plight of indigenous cattle. 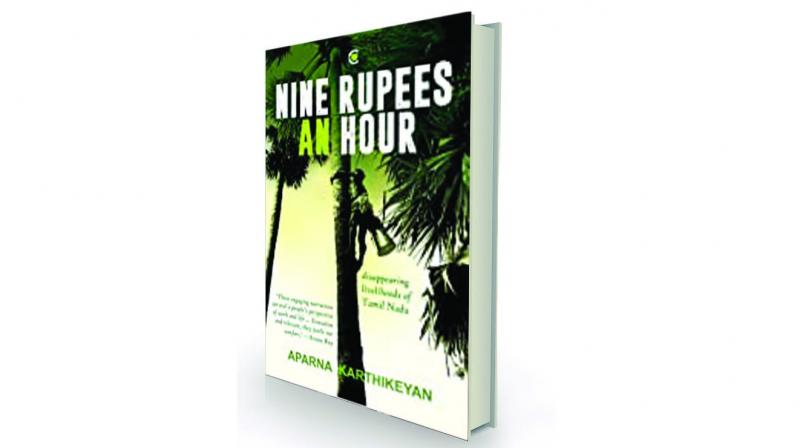 The area under paddy cultivation in Tamil Nadu fell by over 39 per cent in the 2016-17 rabi season due to the poor northeast monsoon. Sowing of paddy and other rabi crops begins during October and November and harvest starts from April. Paddy cultivation is water intensive. There was no rain during this period and farmers barely managed with little or no water. Last year, too, was a drought year.

Tamil Nadu has been water starved for several years now. Aparna Karthikeyan travelled for five years through the state to talk to paddy farmers to see how they are coping and why they stick to paddy cultivation in a rapidly urbanising state. She has spent considerable time with many village artisans and artists. She talks to bull breeders, sickle makers, mat weavers, folk artistes, specialists in musical instruments and other keepers of tradition to write Nine Rupees an Hour.

This is an important book. It provides an insight into agrarian distress, skewed policies, farmers’ changing lifestyles and disappearing livelihoods. As she says in her introduction, “When livelihoods are demolished, it is not just the economy that disintegrates. Culture does, too. Food, sport, clothes worship, leisure are all influenced by local and longstanding occupations.”

Aparna looks at those who do not want to give up what their families have been doing for generations. When she travels to Nadumudalaikulam village in 2015 it was lush and green with ponds full of water from the December rains. Conditions were ideal for paddy cultivation. The rains failed totally the next year. Farmers Podhumani and Jeyabal persist with paddy farming although they have to take other jobs to sustain themselves. Jeyabal works as a swimming instructor in nearby Madurai city.

Why do they not give up paddy cultivation? It’s prestigious. When there is sufficient water, it is profitable. A couple can handle three acres on its own. It is also endless toil. They lease land, struggle for water, wait for years for an electricity connection for their borewell. Inspite of their pride and persistence the couple don’t think farming is a suitable occupation for their teenage boys. Most of the people Aparna talks to will do anything to get their children educated and give them a life without all this toil and trouble.

The Jallikattu protests in Chennai’s Marina Beach brought attention to, among other things, the plight of indigenous cattle. “Over the last two decades, the preference for exotic and crossbred cows that yield more milk over indigenous cows and for tractors and tubewells over bullocks has savagely reduced their numbers.”

A depleted genetic pool brings about all kinds of problems. Government policies have ended up decimating many indigenous breeds. Karthikeyaa Sivasenapathy head of the Senapathy Cattle Research Foundation in Tiruppur whom Aparna quotes, says that there is a huge pressure on farmers when they switch from zero maintenance indigenous varieties to high maintenance exotic breeds.

Then there is the story of 54-year-old Anthony Rayapppan who climbs palm trees to feed his family in Ramanathapuram. He climbs the equivalent of Mont Everest in a week, during the palm season. Palm tree climbing, a risky operation has changed little since 19th century. Rayappan climbs up the tree to extract the sap that oozes from the inflorescence.

His wife then takes over to make karuppatti, palm jiggery, out of it, an equally ardous task. Rayappan’s family has been palm tree climbers for generations, a skill you have to acquire when you are young. Climbers don’t own land and they are perennially in debt. Rayappan’s younger son wants to set up a computer repair shop and a daughter would like to study medicine.

Aparna prose is evocative and she paints wonderful word pictures of the people she has met and the jobs they do. Chandrasekaran, the sickle maker, comes alive in his workshop, his pattarai. His 23-year-old, Santosh, works in animation in Chennai. He dreams of going to America. Award-winning master weaver, Krishnamoorthy from Kanjeevaram, unfolds a 25-metre long fabric, woven with 5,015 of his 10,000 exclusive designs. His two sons are software engineers.

The silky pathamadai mats woven by the Muslim women of that village have been awarded the GI tag. “It has brought a lot of prestige, but the customers only look at the price and colour of the mats.” Rural theatre form Kattaikkuttu which requires, extraordinary strength and stamina from artistes who perform for eight hours, the family of Kamachi who are poikkal kudirai performers, dance of the false-legged horse, are all described with great empathy and sensitivity by Aparna.

Nine Rupees an Hour is book with a big heart. It also raises a lot of troublesome questions. Can a country with one billion plus population be fed without mechanising parts of agriculture or clothed with handlooms? Can aspirations be different for rural and urban youngsters? Do all rural arts and crafts deserve to survive? What is the role of technology? How can community and government come together to preserve what should not be lost?

Sushila Ravindranath is a senior journalist and author of Surge: Tamil Nadu ' s Growth Story. She is now consulting editor for Financial Express.