Book review: A difficult story of Tibet and Xinjiang 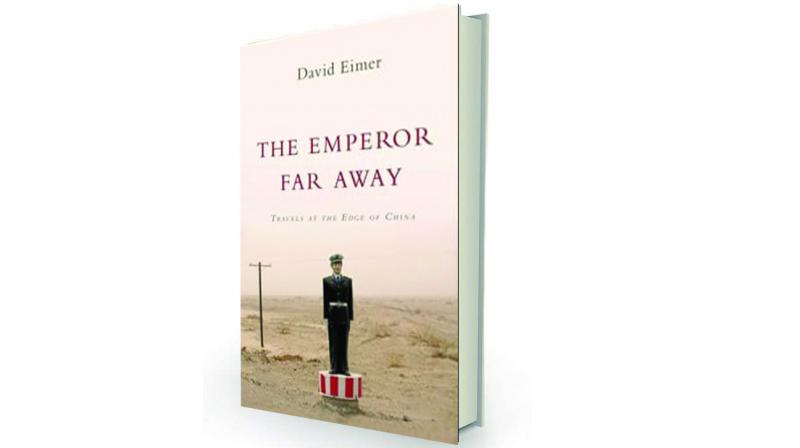 The Emperor Far Away: Travels at the Edge of China by David Eimer Bloomsbury, Rs 1,746

The Emperor Far Away: Travels at the Edge of China is about the borderlands of China, the regions where China meets with its neighbours. China has 55 distinct ethnic groups such as Tibetan, Uighur, Manchu, Zhuang, Mongol, Kazakh and Tujia. But its diversity is swamped by 1.2 billion Han Chinese who comprise 92% of the population. Han Chinese are the majority in every province, region or municipality except for the autonomous regions of Xinjiang (41%) and Tibet (6%). Xinjiang and Tibet occupy 1.6 and 1.2 million square kilometers respectively of China’s 9.6 million square kilometers, and are its two biggest regions.

Most writing about China is about the densely populated Han areas, but little is written or shown about its borderlands, which are more exotic and often quite volatile. This book which gets its title from the Chinese proverb “The mountains are high and the Emperor far away” (Shan gao Huangdi yuan) is about where the empire hangs on to its extremities by its claws. Not very surprisingly its only on the borderlands with North Korea does Eimer find happy to be among the Chinese.

Mao Zedong is quoted to have said in a 1956 speech published in the fifth volume of his selected works: “We say China is a country vast in territory, rich in resources and large in population. As a matter of fact, it is the Han nationality whose population is large and the minority nationalities whose territory is vast and whose resources are rich.” This mentality is at the core of the problem. The problem being clash between the struggles to preserve identities, protect geography and conserve resources with the attitudes and wants of the majority.

The Indo-Tibetan border begins in the eastern most tip of India in Arunachal Pradesh and ends in the icy heights of the Karakoram Range. Tibet’s influence is seen all over India’s Himalayan region where the Tibetan strain of Mahayana Buddhism predominates. There are over 120 Buddhist monasteries in India’s Himalayan region where the Dalai Lama is venerated as the head of the faith. The languages of Ladakh, Sikkim and Bhutan are variants of Tibetan.

Buddhism went to Tibet from India and with it went the best impulses of India’s traditions, philosophy and folklore. Even the Tibetan script is derived from ancient Pali, which was the dominant language of upper India during the period of Gautama Buddha. Lake Mansarovar and Mount Kailash the holiest lake and mountain of the Hindu folklore and tradition, the abode of Shiva, lie in Tibet. Even today the parikrama of Kailas is the highest ritual duty a Hindu can perform in one lifetime, or for that matter even in several.

The Indian relationship with Xinjiang is also an old one. The Kushans were one of five branches of the Yuezhi confederation, an Indo-European nomadic people who had migrated from the Tarim Basin, now in central Xinjiang, and settled in ancient Bactria. The Kushans spread from the Kabul River Valley to defeat other Central Asian tribes that had previously conquered parts of the northern central Iranian Plateau once ruled by the Parthians. They reached their peak under the Buddhist emperor Kanishka, whose realm stretched from Turfan in the Tarim Basin to Pataliputra on the Gangetic Plain. Kanishka was of Turushka or Turkestani origin. Kanishka later made Mathura his capital and is now celebrated as one of India’s greatest emperors.

The name “Xinjiang”, which literally means “New Frontier”, was given during the Qing dynasty. Xinjiang consists of two main geographically, historically, and ethnically distinct regions with different historical names, Dzungaria north of the Tianshan Mountains and the Tarim Basin south of the Tianshan Mountains, before Qing China unified them into one political entity called Xinjiang province in 1884. Dzungaria was inhabited by steppe dwelling, nomadic Tibetan Buddhist Oirat Mongol Dzungar people, while the Tarim Basin was inhabited by sedentary, oasis dwelling, Turkic speaking Muslim farmers, now known as the Uighur people. They were governed separately until 1884.

Like Tibet, Xinjiang also had a troubled relationship with China. Chinese dominance waxed and waned with the ebbs and tides of imperial power in Beijing. After 1912, when Sun Yat Sen proclaimed a republic, the by now enfeebled China lost all authority in Tibet and Xinjiang. Chinese garrisons were driven out and local leaderships assumed complete authority. The KMT regime of Generalissimo Chiang Kai Shek tried to reassert Chinese authority but failed to do so. While Tibet was securely under the control of the Buddhist theocracy, Xinjiang came under the sway of several warlords till 1941 when a renegade KMT general turned warlord, Sheng Tsi Tsai, established a Soviet Republic under the close guidance of the Comintern in Moscow. In 1949, Stalin handed over Xinjiang to the newly established People’s Republic of China of Mao Zedong.

In 1949, the population of Xinjiang was comprised almost entirely of various Turkic nationalities of which the Uighurs were the largest. Han Chinese only accounted for 6%. Thanks to a continuous migration sanctioned and blessed by the authorities in Beijing that proportion has now gone up to almost 48%. Much of this is centered in Urumqi, Xinjiang’s capital, which is over 80% Han. The Uighurs are still the majority in the region below the Khotan and Kashgar line. This is the region that abuts India.

But despite this old and well-recorded relationship, few in India seem aware of the ties our forefathers had with the regions to our north. It is as if the mighty Himalayas don’t let us see beyond them anymore? It was after the advent of Communism in China and the establishment of Chinese communist control over Tibet and Xinjiang in the aftermath of Mao Zedong’s triumph in the civil war in 1949, that India and China finally became neighbours. It’s when the world’s two biggest nationalities, the Hans and Hindus met for the first time. Till then our northern neighbours were Tibetans and Uighurs.

David Eimer, is the Daily Telegraph’s Beijing correspondent and does us here in India a great service by re-introducing us to our immediate neighbours in the north with one of the best travelogues The Emperor Far Away: Travels at the Edge of China. Eimer writes about his journeys deep into Tibet and Xinjiang, sometimes with official permission and at other times clandestinely. His eye for detail and local colour, willingness to live low and rough, and the journalists skill of economising with words while still giving the big picture makes for outstanding reading.

A travelogue, like any other piece of writing, is an art. A good travelogue is a good piece of writing, which is enjoyed by the readers as well as offers valuable guidance. The most important rule of travel writing is to show, not tell, wherever possible. One wants to feel like its eavesdropping on a conversation about a magical and mysterious world. This skill on evidence in every page of the 308 page book and the snap shots of Tibet and Xinjiang it will provide you with will tell the entirely different stories of two of the most troubled nations in China. No punches are pulled. Eimer tells a difficult story, the only way it can. Straight from the mind and as seen by the eye.