Cervantes’ friends thought he was deranged, burned his plays

Puchner is professor of drama and English and comparative literature at Harvard. He visited the Jaipur Literary Festival in 2014. 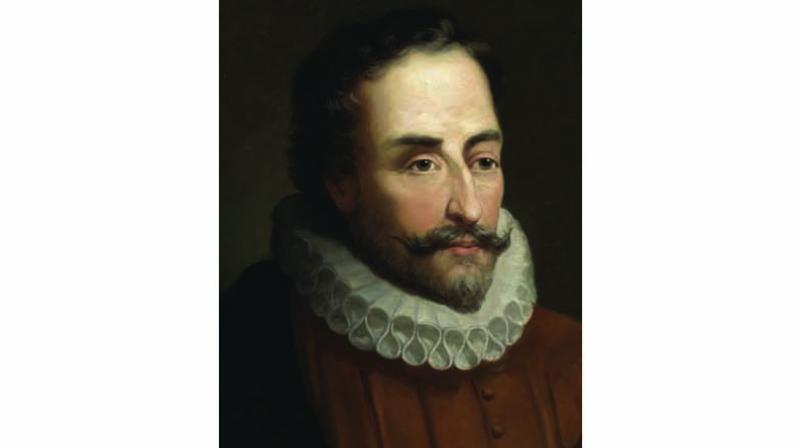 Have you ever felt completely helpless, when your computer freezes for no reason at all, and all other devices around you (your phone, i-Pad, tab, etc) all refuse to work?” “Much like a co-ordinated revolt of the machines!” “I would like to grab a lance and charge at the computer,” says Martin Puchner in his seminal work, The Written World: the Power of Stories to shape People, History, Civilization. These are the words that are central to Puchner’s chapter on Miguel de Cervantes, the celebrated author of Don Quixote. Puchner is professor of drama and English and comparative literature at Harvard. He visited the Jaipur Literary Festival in 2014.

Puchner surveyed the art of storytelling in different cultures across the world, and says that storytelling led to the creation of “foundational texts” that have played a dominant role in our lives. These “texts” have been with us even before the invention of writing which originated in the Sumerian and Mesopotamian civilizations, before passing on to Egypt.

Writing, in fact, now enabled people to record facts and events. But not everyone welcomed it. The Egyptian Pharaoh, when told that his people had discovered the ability to write and now no longer had to remember, is said to have remarked, “What will happen to memory now?” Writing was considered by some to be subversive, too. In the oral tradition, the storyteller controlled the narrative. He lost that control when the story was written up and surrendered to the new technology. It was for this reason that brahminical priests persisted in continuing with the oral tradition of reciting from the Vedas by heart. This led to a sharp critique from the Buddha who also ironically, preached all his sermons orally. But with one important difference. The Buddha preached in a language that the common people could understand. The Buddhist texts got written up only after the Sakyamuni’s death, as “foundational texts” so that there would be no deviation from what he had preached.

The Ingenious Gentleman Don Quixote of La Mancha was rooted in the written tradition and though written as a medieval romance by Cervantes over a period of time was actually published in Spanish in two parts, in 1605 and 1615. It too was considered a foundational text and is considered as the first modern novel and for some, laid the foundation for western literature. The story revolves around the adventures of a noble or “hidalgo” in Spanish from La Mancha called Alonso Quixano whose passion was reading. Quixano read romances set back in time of days of chivalry, of daring exploits of knights in shining armour, who, if not rescuing damsels in distress, slew evil monsters. Quixano read intensely, obsessively and exclusively. He read so much that it turned his head and his fevered imagination made him assume the role of the knight. Not a bad thing, for one’s reading must help one imagine or visualise. Except that Quixano got so caught up with the stories that he decided to “enact” them.

He embarked on a life-saving mission of delivering both people and the nation from evil. He adopted the name of Don Quixote of La Mancha, recruits an illiterate and simple farmer Sancho Panza as his squire, rustles up a rusty armour and lance and converts his old horse to a noble steed. There is one important aspect, however, when Quixote sets out on his noble mission. He does not perceive the world as it is, but sees it through his imaginary prism. These two aspects, the real and the imaginary, make up the complex personality of Don Quixote.

The publishing of Don Quixote was a literary classic and made Cervantes a household name throughout the Spanish-speaking world especially when Cervantes, to give Quixote a touch of authenticity, said that in part, the book was based on stories from the archives of La Mancha, and in part, a translation from an Arabic text. Not only did Quixote become a foundational text, but Cervantes became a literary icon in erstwhile Spanish colonies.

The “Festival International Cervantino” from modest beginnings in the 1950s assumed its modern character in 1972. It has become one of the foremost literary festivals celebrated annually in the picturesque and cultural town of Guanajuato in Mexico. More popularly knowns as “El Cervantino”, the Cervantes Festival has included an art book festival in its ambit devoted to both the visual and the theatrical arts. The festival now attracts almost 3,000 artists from 29 countries in a variety of performances such as opera, music, dance, theatre, street performances, visual arts, films and literature along with academic events.

India has been a regular participant at the Cervantes Festival. In 2018, it was the festival’s “guest of honour”. We visited Guanajuato in 2015 and met the noted dancer Astad Deboo who was rehearsing along with his troupe. My sister was happy to renew his acquaintance for she had interviewed him in Mumbai as a journalist. The historic town of Guanajuato was famous because of the location of the silver mines nearby. It was also famous as being the birthplace of the Mexican painter and muralist Diego Rivera. Now the city had been declared a world heritage site and this enabled the city to restore and preserve its old architecture and cultural heritage. In fact, our car entered the city through a series of underpasses. At the festival, a lot of Cervantes merchandise was available on display. Apart from the Spanish, copies of Don Quixote were available in English, French, Italian, German and other languages. Along with the books, bookmarks featuring Don Quixote in a dual visage, sane and mad, and T-shirts were on display. The mad aspect was due to the knight-errant charging at windmills as they represented monsters in his imagination but also to his propensity to charge at people at the slightest provocation.

While the Cervantes Festival highlighted Don Quixote, its dominant theme was to celebrate the short plays written by Cervantes called entremeses. How Cervantes entered the world of literature is interesting. He started life as a soldier on behalf of Spain in the Holy League, an alliance of catholic sea-faring nations to resist the expansion of the Ottoman Turkish Empire. After exceptional bravery at the Battle of Lepanto, Cervantes returned home along with his brother. Just off Barcelona, Cervantes was captured by North African pirates, and spent several years in captivity in Algiers. Freed by a ransom jointly raised by Trinitarian monks and his family, Cervantes finally returned home after five years as a soldier and another five years as a captive slave.

It was in order to repay the ransom money that Cervantes turned to writing. This was the golden age of theatre in Spain, comparable to that of Shakespeare’s England and also had royal patronage. It was the golden age of print as well. The theatre industry was always hungry for new plays, plays on Spanish history and folktales, that could entertain royalty as well as the masses. Successful playwrights could make good money, and the more popular ones could also get their plays printed thus accessing a reading public. The most successful among them was Lope de Vega who had become a national celebrity with 1,500 plays.

So Cervantes began writing plays. He had the best material at hand, his years of captivity in the slave camps of Algiers. But theatre, like writing, is a cruel mistress. Drama had to capture the popular imagination and ensure immediate success. It was a competitive world, and as Shakespeare’s rival playwrights too found out, pretty unforgiving. Cervantes’s plays did not quite make the cut, his first-person account of his captivity was bettered by similar accounts of others. Many of his plays, the earliest ones, rich in descriptive account of his years in Algiers, are lost today.

To add to his troubles, Cervantes found himself in prison again. Apparently, he had defrauded the state exchequer while working as a tax collector. It was in prison that Cervantes conceived of the plot for Don Quixote, a desire for a simpler world, where good and evil could be clearly defined and evil could be put down through heroic action. Not only did Cervantes make the protagonists, Quixote and Sancho Panza hear the stories from inn-keepers, prostitutes, goat-herders, soldiers, priests, escaped convicts and scorned lovers, he enacted them by putting himself in them. His friends thought him deranged and burnt his collection of chivalric plays. But print came to his rescue and ensured the survival of Don Quixote. It is said that even the sea pirates read Don Quixote. But Cervantes was not done with piracy. Apart from pirated editions, even an unauthorised sequel to Don Quixote was published. For all his distrust of windmills, the paper plant on whose paper Don Quixote was printed was run by a windmill!