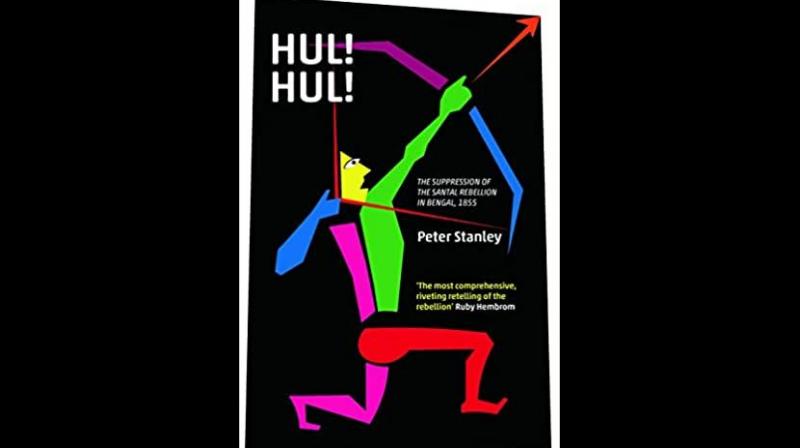 The Santal rebellion has been explained virtually from the moment it began in July 1855. An anonymous article in the Calcutta Review published early in 1856 set the essential narrative of the insurrection within months of its declared end, a narrative which this book seeks to elaborate and challenge. The essential chronicle of the rebellion has been that it erupted as an inchoate response to the exactions of Bengali merchants and saw savage reprisals against the money-lenders and landlords who oppressed the Santals. ‘British’ troops — their identity, numbers or strategy never presented clearly — moved against the Santals, and by unspecified but evidently murderous military operations, suppressed the rebellion amid the imprisonment, punishment and impoverishment of the Santals. At least 10,000 Santals died.

Memories of the insurrection remained fresh when Sir William Hunter’s 1868 The Annals of Rural Bengal included a chapter on the rising. This, along with the article in the Calcutta Review set the interpretation for decades, reinforced by sections of the Imperial Gazetteer of India, which Hunter edited from 1881. Just two substantive histories of the Hul exist: Kali Kinkar Datta’s 1940 The Santal Insurrection and Narahari Kaviraj’s Santal Village Community and the Santal Rebellion of 1855, published in 2001. Both books were partial, in both being incomplete and in presenting interpretations unjustified by the evidence.
Ethnographic or anthropological understanding is fundamental to comprehending Santal motives, actions and memories. The Santals, with their complex relationship to nature, intricate cosmology, and vivid poetic oral culture, naturally attracted generations of ethnographers, amateur and professional, including missionaries, British officials, academics and later officers of Indian government agencies. They included officials such as Francis Bradley-Birt, author of The Story of an Indian Upland, and William Archer, author of The Hill of Flutes, one of the most evocative of the anthropological accounts of Santal culture, and missionaries such as the Norwegian, Paul Olaf Bodding and the Scot James Macphail. The work of both officials and missionaries demanded an intimacy with Santal language and culture, and all recorded it, affectionately, even lovingly, impelled by fears for the Santals’ welfare amid a largely Hindu population or hopeful of their conversion to Christianity. The events of 1855 often figure in their interpretations of Santal life and belief. Especially popular has been the creation of fictionalised biographies of individuals and families who lived through and were affected by the Hul. Besides the imaginative reconstructions such as by Macphail, who in 1922 used the fictional characters of Manka and his family to dramatise The Story of the Santal, at least four novels set in the uprising have appeared: in English Robert Carstairs’s Harma’s Village (1937) and Sanjay Bahadur’s 2013 Hul — Cry Rebel!.

The attention devoted to the Santals by anthropologists of various kinds inevitably created not only a rich body of scholarship on Santal culture, but also produced insights into the place of the Hul in that culture. In 1945, for example, the journal Man in India published a long article on the uprising, interpreting it using Santal sources — songs, stories and community memories.

While offering insights into Santal experience and memory of 1855, however, anthropological works often drew on a conventional and simplistic version of the uprising. Many accounts, for example, quote the familiar words of Major Vincent Jervis of the 56th Bengal Native Infantry — ‘it was not war ... it was execution’ — emphasising the brutality of the rebellion’s suppression, but none give the anecdote any source or context.
A visitor to the Santal country, and especially to the impressive memorial at Bhugnadihee, would understand the Hul’s significance, and be led to see it in heroic, but also simplistic terms. This history provides unprecedented detail, though it also confirms the heroism of the Santals’ doomed rebellion.

What justifies this new history? Simply that although the Santal Hul has been the subject of intermittent interest over the years, from both historians and anthropologists, no one has used the immense documentation available in the military records of the East India Company’s archives in the British Library to attempt to produce a complete account of the rising, its suppression and its effects. This interpretation draws upon the work of earlier scholars but it essentially contributes what none of them have attempted: to understand the events of 1855 from the perspective of the vast and hitherto unexamined military records. It explains, for the first time, what happened when Santals armed with bows and arrows confronted Bengal sepoys armed with muskets and supported by artillery, rockets, river steamers, railway trains and the electric telegraph. This book constitutes the first explicitly cultural-military-political history of the Hul, and places it in a context that no other study has attempted: the history of insurgency and counter-insurgency.

Excerpted with permission from Hul! Hul! by Peter Stanley (Bloomsbury)