Book Review | Love, and the dilemmas of devadasi life

A novel that beautifully echoes the sentiment of the Devadasi community 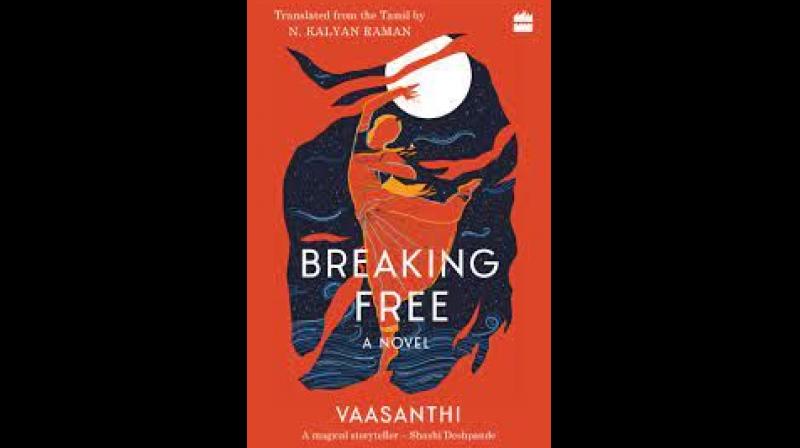 Cover page of 'Breaking Free' by Vaasanthi. (Photo By Arrangement)

The novel is exquisitely multi-layered in its themes — devadasi, freedom, love, patriarchy, women —peeling back one from the other seamlessly — like strands of a tapestry, separate yet intertwined, all together making up the composite picture of an individual, a community, society, and nation.  Set against the backdrop of the country’s struggle and clamour for liberty from British bondage, the story resonates with the call and the urge for — and most often, the suppression of — right of choice and the enactment of free will, at various levels.
The devadasi community — looked down upon yet allowed to dance and sing in the presence of the deity in the temple precinct — embodies all the ironies and double standards that our society practises and to which most turn a blind eye.  By narrating the story of the beauteous Kasturi, the dancer par excellence, her sister Thilakam, the queen of melody and the others who are part of their lives — the mother, the brother, the grandmother, the friend, the lover, the patron — Vaasanthi documents the heartrending predicament of the lives of not only the women of the devadasi clan but all women across caste and class.

Although the devadasi families are considered of a low caste, there are others who are even lower — like Singaram, the sculptor with whom Kasturi falls in love, and who would not be accepted by her mother because of his caste!  And once her affair with him is known, she is denied permission to dance in the temple ever again.  However, that the Raja summons her to satisfy his lust and is not above pimping her out to the Durai — the British lord — is not even seen as an issue!
There is no doubt that that the devadasis — and the courtesans — were the ones who kept the legacy of our dance and music alive.  They were not prostitutes but highly accomplished women, well-versed in the arts.  At one point, Kasturi remarks wryly to her friend Lakshmi who is actively working towards getting a law abolishing the devadasi practice passed, that once the law comes into effect and the women start getting married, they will forget the Ragas and only remember recipes!  That their lives were dictated by the upper caste men who regarded them as their property is their tragedy, as is the fact that a number of them never even considered their lives as being in bondage, “their minds had become blunt” and they blindly accepted it in the name of tradition and fate.
The novel sets out the changing circumstances, how “earlier one needed status just to get angry.  Now, everyone was angry.  Pallars, Paraiyars, even women”. The last in the list is telling enough.

There are the conflicts — Lakshmi wants to escape from her community and become a lawyer or a doctor.  Kasturi however wants to dance — that is her life. Thilakam gets ‘freedom’ through marriage to a Brahmin boy.  But she is not allowed to sing any longer.  Why cannot each of these women choose to do what they love most in the world?  Why do they have to choose one or the other? If Thilakam is not free to sing, what kind of a ‘freedom’ has she escaped into?
The story moves back and forth through time and space and families in its textured narration, gradually but inexorably moving towards a dénouement that reinforces the cruelty of society’s dictums and underscores the ferocity with which those who had been discriminated against fight to erase any past association with what had been perceived as a stigma.

The language beautifully echoes the sentiment, the situation — tender when it is required, poetic in its description.  When Singaram and Kasturi hold hands and flee the police, “his hand feels like iron.  Like a ball of flowers, her hand takes shelter in his.”  What an expanse of love, sanctuary and surrender is contained here!  The translation is excellent, not a note out of place, the underpinnings of the original held intact through the use of certain Tamil words and terms which substantially convey the cultural ethos and ambience.
Breaking Free is a novel that deserves to be read, not least by the keepers of the feminist and cultural flames.