The notion that Muslims’ problems are internal and self-made is the cornerstone of a new intellectual orthodoxy. 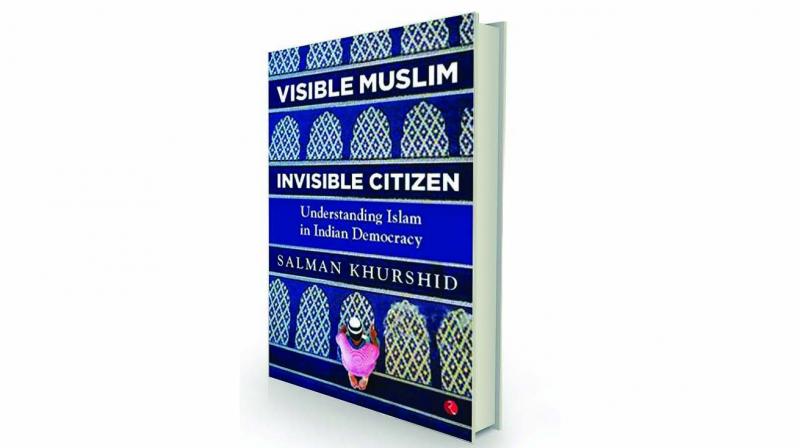 As much an attempt to analyze the prevailing condition of his religious community as it is a reflection on his own experience of growing up as Muslim, and as a very able minister in various Congress governments, Salman Khurshid’s latest work is an ambitious one. Given that he has spent decades in national politics, his insights into events and issues are of tremendous scholarly interest whether one agrees with them or not. Emanating from his first-hand experiences as a policymaker and grassroots politician, his observations impart to it a unique intellectual value as compared with other ivory tower publications on the subject. The fact that he has published it only a few weeks after a gritty election campaign in which he was a candidate calls for further acclamation. The book is dedicated to the Jarari village of Farrukabad in Uttar Pradesh.

The essays cover a wide range of themes — all of them critical to the problems Muslims have faced in modern India. There are chapters on the Babri Masjid dispute, Aligarh Muslim University, riots, Pakistan, the Rajinder Sachar Commission report and so on. In the chapter titled “The Shrinking Space”, the author has extensively commented on debate triggered by opinion pieces written by Harsh Mander and Ramachandra Guha. This discussion not only reflects how secularism and Muslim issues are debated; it also exposes the limits of liberal understanding and articulation of these issues.

The chapter titled “Aligarh Character Assassination” presents crucial insights into the history of Aligarh and Jamia Millia Islamia – and the challenges that these two premier institutions have faced in the past and continue to face today. The author also reflects how the media often distorts statements of prominent public figures. It has a fascinating and rather elaborate discussion about what we often hear as “misquoted” or quoted “out of context” by political leaders. To quote the author, “The electronic media exploded with, ‘Salman Khurshid admits that the Congress has Muslim blood on its hands.’ The vernacular media went one step further to speak of the ‘khooni panja’ or the ‘killer hand’.” Inside the Congress party, it became an issue as well. This whole story tells readers how in the race for TRPs (television rating points) and sales, truth becomes a casualty.

The book’s other objective is to  help understand Islam, accomplished in several chapters titled “Understanding Islam”, “Sufi Traditions, Institutional Islam, and Rediscovery of  Islam” and “Indian Renaissance”. Here Khurshid engages with Allama Iqbal’s famous book, Reconstruction of Religious Thought in Islam. He quotes Javed Iqbal, son of Allama Iqbal, also former judge of the Supreme Court of Pakistan, who recognises three key negative influences in the world of Islam: autocratic monarchy, ignorant mullaism and decadent Sufism. Given that India does not have monarchy, the two other continue to be relevant.

In this age of majoritarianism and post-truths, facts and arguments are misrepresented on a regular basis. In a discussion on the NDTV show, Left, Right and Centre, hosted by Nidhi Razdan, Zafar Sareshwala argues that the Muslim under-representation in civil services is owing to lack of appearance of Muslim candidates. Has the RSS stopped Muslims from appearing in these examinations, he asks. We are told that Muslim problems are self-made, and any recognition of discrimination is either misplaced or exaggerated. This is the new twist to the analysis of Muslim issues in India. Consider this: on civil services intake, the results are not dependent on the appearance of the numbers of candidates from any caste or community. For instance, the large number of success of Hindu upper caste students is not owing to the fact that they appear in greater numbers. Likewise, perhaps more students appear from Bihar and Uttar Pradesh as compared to Rajasthan or Gujarat because of the culture of seeking state employment is do minant in these states. The huge dropout figure among Muslim students owes its origin to the socio- economic backwardness of the community and that is exacerbated by the pervasive discrimination they face in employment or housing. The Sachar report in 2006 and other studies have established these trends. Yet this is one point skipped in the debate.

Another instance of glossing over the elephant in the room which is negative discrimination against members of the community in public life is seen in the argument that Muslims are not “winnable” political candidates. It is perhaps the most disturbing consequence of the growing clout of Hindutva in politics and the general Indian mindset.

During the height of the Anna movement, I asked Andre Beteille about his view on Anna Hazare as a leader. “A good leader has to be a reading and writing person,” replied Beteille, and continued, “Look at Gandhi, Nehru etc. how much they wrote.” “Given that Anna has barely any intellectual interests, he is man of a very limited potential,” he concluded. In this age of the strongman Yogi, and his growing band of fellow travellers; one wonders how long India will continue to see politicians like the author himself and his ilk. They are indeed the new endangered species of Indian politicians.

These politicians are by no means perfect, but at least one can have a civil conversation and put one’s points across to them, a basic criterion of democracy, something getting corroded by the day at a time when criticism is seen as either treason or anti-national.

The notion that Muslims’ problems are internal and self-made is the cornerstone of a new intellectual orthodoxy. This book presents rich material to fight that idea.

The writer is a political scientist at Jamia Millia Central University and author of Communalism in Postcolonial India: Changing Contours (Routledge, 2018)