Pattanaik deals with the facts with gentle brush strokes, lending the book a smooth flow. 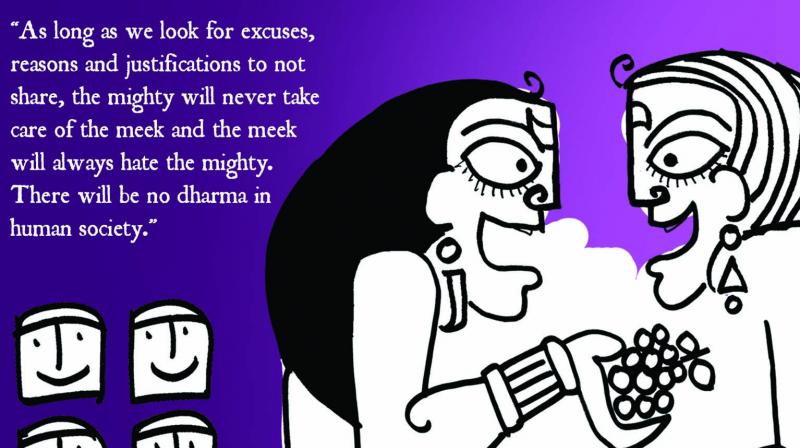 Just the way a mother slips in some healthy vegetables in the tiffin of her child, Pattanaik sprinkles the lesson of Dharma (a tough topic to teach children) throughout the book for kids.

The Boys Who Fought, pitched as The Mahabharata for Children is the latest offering from our very own mythologist Devdutt Pattanaik. In the introduction Pattanaik says that stories are like chocolate eclairs: you chew on the outside – the story - till you get to the soft sweetness inside – the idea. And nothing can be farther from the truth than this. Written and illustrated by Pattanaik, the book presents the epic to the children in a fast food format, much like a pizza which they can devour in a jiffy.

For me, who comes from a family where everyone reads some or the other holy book, I thought I knew all that there was to know about the Mahabharata, but I too came away with precious nuggets of information when I read this book. I had no idea that the Pandavas were born in a forest as their father Pandu of the Kuru clan, king of Hastinapur, had decided to stay in the forest as a hermit to atone for accidentally killing a sage and his wife, mistaking them for gazelles.

Another fact I was unaware of was that the Kauravas had a sister called Dusshala and that Duryodhana, the eldest of the Kaurava brothers, was born on the same day as Bhima. 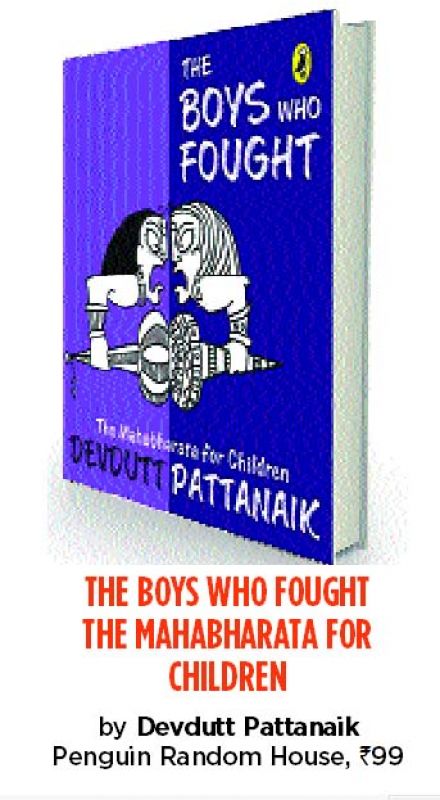 Other facts related to the epic included in the book are: Drona agreed to teach the 105 Kuru princes (100 Kauravas and 5 Pandavas) at the behest of Kripa, the royal tutor, on the condition that when the time came they would repay Drona for his teachings; the Pandavas met Krishna for the first time at the wedding of Draupadi and the Pandavas; Draupadi gave birth to five children, one son by each husband who were called the Upa-Pandavas and also that Arjuna married three women, each of whom bore him a son.

Just the way a mother slips in some healthy vegetables in the tiffin of her child, Pattanaik sprinkles the lesson of Dharma (a tough topic to teach children) throughout the book for kids.

His definition of Dharma is simple and easy to grasp: “When you can fight for the meek without hating the mighty, you follow Dharma. In the forest, the mighty eat the meek. In human society, the mighty should take care of the meek. This is Dharma.”

The simple illustrations suit the theme of the book. At no point does the narrative become heavy, which may overwhelm the young reader. Pattanaik deals with the facts with gentle brush strokes, lending the book a smooth flow.

But I do wish Pattanaik had delved deeper into the Bhagvad Gita, of which he just gives a brief mention saying that it contains Lord Krishna’s discourse to Arjuna in the battle field at the time when the Kurukshetra war was about to begin. That is a bit of a disappointment.

But no complains, as he does a commendable job with the rest of the book. For the parents cribbing that their kids aren’t into reading habit, this book comes as manna from heaven.