Saving the world from the bottom upwards

All three apply the experimental method of randomised control trials (RCT) from the physical sciences to social science. 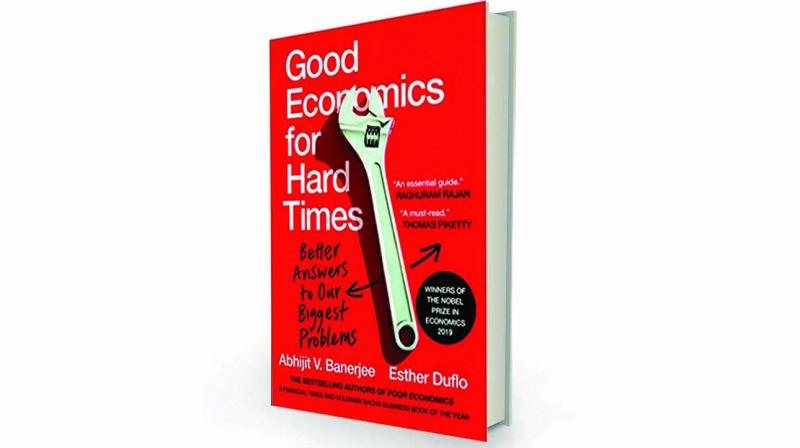 One doesn’t quite know what it takes to win a Sveriges Riksbank Prize — instituted in 2006 in Memory of Alfred Nobel — in the Economic Sciences category. The three winners this year, of which two are also co-authors of this book, are the ones best placed to find out for they have bet their careers on figuring out why humans do what they do.

All three apply the experimental method of randomised control trials (RCT) from the physical sciences to social science. The claim is that RCT serve to convert economic philosophy into a science by relying on evidence rather than ideology (to be wealthy is glorious or alternatively private property is theft); belief (the poor are lazy) or informed guesswork (low taxes are good for growth).

Poor Economics published in 2011, a first for the Banerjee-Duflo duo (BD hereafter) was about applying the learning from the RCT experiments to formulating policy for ending poverty.  This book spans a larger canvas covering the big issues facing us today.

Is migration a calculated economic choice exercised for a better life or a last resort for those pushed to the brink by politics, war or climate disruptions and what does migration do to the host country?

Are the gains from international trade equitably distributed as assumed, or are there losers? Are individual or societal preferences rational, carefully thought through choices to be respected or merely the product of historical biases and targeted political outreach to exploit existing social chasms and deepen homophily — the comfort zone of associating only with familiar stereotypes?

How are needs different from wants? If a poor person has a TV but not enough food, is the TV a need or a want?

What is economic growth and can it last forever? Is reducing consumption the only real option for mitigating climate change? Will AI and robotics result in permanent net job loss?

How can governments gain legitimacy? Can more cash end poverty or is restoring the dignity of those left behind as important? These are some of the broad themes explored with meticulously researched references to back the arguments.

The best thing is that the BD duo never talks down at you. They are both teachers and young parents, who have mastered the skill of storytelling — unveiling their arguments in a sequenced manner paced to retain the reader's attention. It also helps that they delight in debunking carefully crafted economic myths by leading the evidence to show up their limitations.

If humans are rational maximisers of self-interest, as is commonly assumed, why, they ask, don’t poor workers in Odisha accept lower wages in exchange for more days worked rather than starve whilst holding out for a higher daily wage? The answer is that maintaining group identity is vital as an economic backstop for the poor, so group pressure dulls an individual workers “rational” response, thereby rendering labour markets sticky.

A fundamental assumption in macro-economics is that in the long run (how long is that anyway?) markets smooth out the misallocation of resources across the factors of production — land, labour and capital. But across countries migration controls (think Japan) pose a barrier between surplus labour in poorer countries and labour demand in richer countries. Digital services provide an alternative but the outsourcing country loses out on national income.

Within a country government policy can encourage such seamless movement of resources. But in reality, firms and workers bear the cost of the many barriers to such seamless
reallocation.

And what about the best kept secret in trade economics that there are significant “pains from trade” along with the gains. It is true, say the authors, that a rising tide raises
all boats. But do all boats rise by as much? Or are there losers from trade liberalisation who then have to be compensated by the government by levying higher taxes — hopefully, only on the winners.

The Banerjee-Duflo team are a curious blend of Eastern asceticism and thrift, European social ethics and the Anglo-Saxon belief in markets and citizen rights. This is not surprising. Banerjee is an American with an Indian heart and Duflo is French. They both work in developing economies in Asia and Africa. Their multicultural heritage and “patient work experience” with the poor, flavours their scientific objectivity with a thinly-veiled soft heart for the underdog.

This reflects in their views on growth — a central preoccupation in economic policy over the last two decades. The duo agree that growth is the basis for much needed jobs and taxes to finance human capital development, build infrastructure and provide a safety net for the inevitable losers from economic reform.

They agree with Robert Solow that growth is an exogenous process. So, government policy can do little to alter the rate of growth because there are too many happen-stance factors —the price of oil in 1973, war in 1990 or the end of a cycle of high productivity in 2008 — which are outside the control of national governments. Their advice for political leaders who seek everlasting high growth is to instead, seek everlasting youth, which is presently, more reachable.

They warn that over-reliance on growth as a headline performance metric can lead to massive market distortions and grandfathered losses as governments resort to “unorthodox policy” to whip up flagging growth, usually at the cost of the poorest. The current stress in Indian and Chinese banks is one such outcome of governments failing to take the pain of reform in 2008 by opting for loose credit policy to sit out the downturn in the hope that growth would return.

The BD duo is unfailingly humane and high minded by instinct, objective in their scientific assessments and precise in their diagnosis of the problem. This book is a must read for anyone interested in understanding the behavioural roots of effective economic policy.

Sticking to their comparative advantage — the evidenced economics of hard times will be difficult. Nobel Prize winners are expected to be prophets, heralding a new dawn, not diligent scientists obsessing over the “right” nuance to a policy. Saving the world from above is likely to be very different from saving it from within. Hopefully their single minded pursuit of the truth shall prevail.