The quests that bind the teacher and the taught

The impact that great teachers have on their students in schools, colleges and even universities is remarkable. 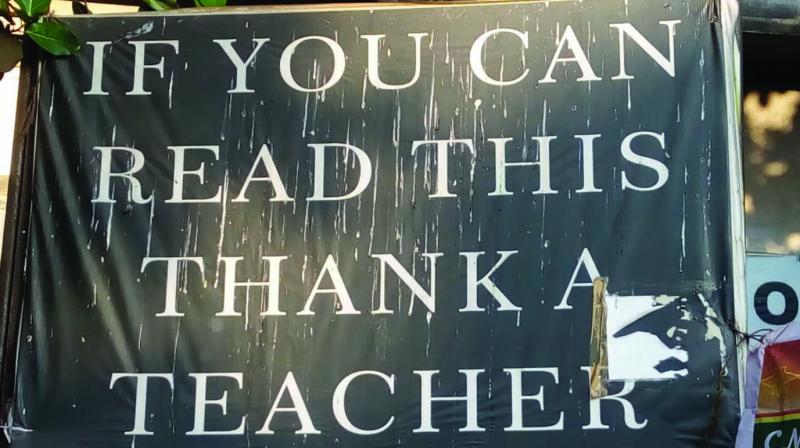 At school, teachers have the advantage of dealing with young, formative minds full of inquiry and curiosity.

There were two questions I would invariably pose to school teachers at the end of my numerous workshops in school. One was, whether any of them had won books as prizes during their school years and had they still retained some of these books?  The second was, did they remember any of their teachers who had inspired them in school? I got varied answers to these questions depending on the age group of my audience, sometimes on the location and also on the level of the school. The question relating to prize books was not meant to differentiate among teachers but more to gauge their relationship to books and how much they valued them. Children tended to value books given as prizes and also as birthday gifts more than the books they used for their classwork. The books used in class were more in the nature of “workbooks”, a means to an end, to be discarded when the academic year was over. But the prize or gift books were meant to be savoured and treasured, keepsakes for many more years to come. Today, as we hardly see any evidence of books given as gifts during children’s birthday parties, it was important, I said, to work out means and strategies to rekindle the importance of books in a child’s life and make children value and treasure them.

The purpose of my second query was to kindle another relationship, that between the teacher and the taught. I wanted the teachers to look back on the years they, themselves, had spent in school and at their own teachers. Who had inspired them and perhaps even sparked off their basic interest in the subject they now taught? How many of them went on to major in that very same subject and achieve distinction later? Did they pause, sometimes even from foreign shores, to reflect on that teacher in school or college who had started it all?

In Mumbai where I had to spend some time at the Worli sea-face recently, I saw a signboard, white on black, which read  “If You Can Read This, Thank A Teacher”. The signboard was very similar to that of a black-board in a classroom. I did not inquire as to who it was that had placed it there. Could have been an NGO (The Jumbo Kids Learning Centre had been located nearby for years) or a public spirited individual, but I thought of it as a wonderful tribute to teachers everywhere. It was also remarkable that the board stood there for all these years and had not been defaced. In the evenings, a vendor of kebabs put up his stand under it and there was a story behind this too. I got talking to the venerable gentleman and his assistant and told them of another “kebab-wallah”, the legendary Bade Miya, who used to ply his trade for years at Colaba just behind the Taj Mahal Hotel. In those years, the Oxford University Press had its offices at Oxford House just behind the Taj, too, and no meeting was complete without Bade Miya’s kebabs at the evening of “conviviality and good cheer”, as Neil O'Brien would invariably put it. As luck would have it, the Worli “miya”, too, remembered those days and the OUP. It turned out that he had worked as an apprentice with bade miya!

At the workshops, I got varied responses to the question on teachers, too. But it was remarkable how many of the teachers had spent their school years in the same institution, and had now come back to teach after obtaining higher degrees. I thought of an editorial colleague whose son happens to be doing his PhD in history at the University of California in Berkeley after obtaining his master’s degree at the University of Chicago. Visiting Delhi recently for a longish spell to learn Persian as part of his language requirements, his old school invited him to teach history in the higher classes for a semester, after exercising due diligence with a supervised class. What a great experiment!  Surely, his classes must have been inspiring.

The impact that great teachers have on their students in schools, colleges and even universities is remarkable. At school, teachers have the advantage of dealing with young, formative minds full of inquiry and curiosity. How these minds are to be shaped in the future would greatly depend on the teacher concerned who would get to spend the maximum time with their wards. It was an exciting opportunity but also an onerous and responsible one. Apart from inculcating the right values, the teacher had a role to create interest in a particular subject. This would have an impact in making important career choices later. I studied in a residential school in the Nilgiri Hills for six years in the early 1960s. For some reason, at the time, the school did not have a viable alternative to the science subjects in terms of arts and humanities. Commerce had yet to emerge!  With subjects like domestic science, art and needlework as an alternative to science, one plowed through physics, chemistry and mathematics along with civics, history, geography and English. The only concession I was able to wrest was to get composite mathematics changed to general maths. I got first division marks in the board exams alright (partly helped by a distinction in Hindi) but my heart was not in the science subjects at all.

It was a great relief to change to the humanities and social sciences in college in Kolkata. The interest in these subjects partly kindled by the teachers in school was further reinforced by the Jesuit Fathers in college, Father Huart in political science and Father Schepers in history. Our college then did not have an honours programme in history, but Schepers brought history alive in the classroom and inspired us. He taught the most exciting period of European History from 1789 to the outbreak of the Second World War and went far beyond the confines of the rather dull textbooks prescribed at the time. I still remember vividly his reading of Napoleon’s birth one stormy evening in the island of Corsica from Emil Ludwig’s biography. We were spellbound and I quickly got my own copy.

It’s a fitting gesture that the London School of Economics has decided to create a Chair in Inequality Studies and name it after the Nobel Laureate Amartya Sen. Sen has been the pioneer of poverty and inequality studies and I am happy to have been associated with publishing the bulk of his work in India. Sen taught economics at the LSE from 1971-82 and it is his qualities as an inspiring teacher that have been cited in the preamble to the chair. The LSE has been hosting the annual Amartya Sen lectures for some years now and this year it was his former student Sir Tim Besley who delivered the lecture. The director of the LSE, Minouche Shafiq, describing Sen as one of the greatest thinkers on social inequality, said that Sen was a “rockstar” among teachers at the University of Oxford University where she was doing her PhD. Sen was Drummond Professor of Political Economy and a delegate to the OUP at the time. Shafiq went on to say that when word went around that Sen was leaving Oxford for Harvard, the students panicked. She herself attended every single lecture of Sen’s to absorb as much as she could from a great teacher. She could now scarcely believe that a chair in honour of Amartya Sen would be established at the LSE under her directorship!

At the request of Oxford, I once had occasion to present the Sir Lionel Robbins Lectures to Dr Manmohan Singh, the former Prime Minister and a one-time teaching contemporary of Sen at the Delhi School of Economics. I had a hard time locating his room at Parliament House, with broken chairs and leaking water coolers in the corridor and a rolled-up carpet over which I duly stumbled. I finally managed to enter his room only to be admonished by his personal assistant that doctorsahib was waiting!  Apologising to Dr Singh  I said there has been many obstacles ion the way to his room.

Dr Singh, while asking for some coffee to be served, replied with a twinkle in his eye, “That’s why I am the Leader of the Opposition (which he then was)!” He was indeed very happy to receive the book and told me “they don't make teachers like Sir Lionel anymore. He inspired a generation of students”.