Immensely readable, but only about Atal

Some explanations are rather too pat, some observations are superficial, but it is that sort of a book. 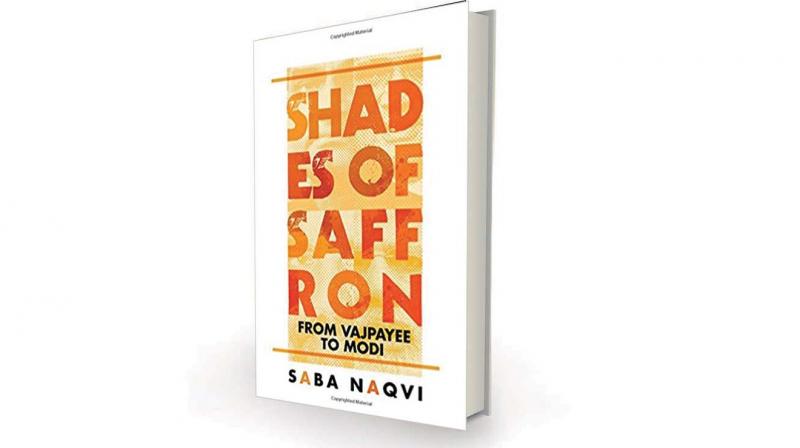 Shades of Saffron: From Vajpayee To Modi by Saba Naqvi, Westland, Rs 599

This is a very easy book to read. It has large print and an easy-breezy style. It is not an in-depth, researched analysis of the creation and rise of the Bharatiya Janata Party. Instead, it is a compilation of the observations of a well-known journalist who covered the BJP for 20 years. Saba Naqvi fills Shades of Saffron with her insights and personal anecdotes of BJP leaders and visiting the BJP offices in New Delhi.

As it happened, I started reading Shades of Saffron just after former Prime Minister Atal Behari Vajpayee passed away. The media was full of obituaries and personal stories and meetings. Many journalists appeared to adjust their condolence messages based on whether they had tea with Vajpayee or not. Since Naqvi did not write this as an obituary, you get a picture of a complicated man who wove and ducked around his own party as well as the rest of India.

In fact, a large part of the book is about Vajpayee and certainly, as founder of the BJP and as its first Prime Minister, he was a towering figure. The years between 1984 and 2004 are what set the BJP in the public mind, with due apologies to Narendra Modi and his acolytes. The Vajpayee years, his relationship with L.K. Advani, with the RSS, with the Opposition are all described and explained.

Some explanations are rather too pat, some observations are superficial, but it is that sort of a book. As often happens, sometimes when you are too close to a subject, objectivity is difficult. However, it is also true that Naqvi does not shy away from dealing with corruption and equivocation charges that dogged the BJP and Vajpayee himself while he was PM. The roles played by Vajpayee’s son-in-law Ranjan Bhattacharya and by Brajesh Mishra in the PM’s home and the PMO and the friction they caused, Govindacharya’s accusation that Vajpayee was a “mask”, are all discussed. Many may have forgotten the details, so this book is a good reminder.

The Vajpayee-Advani relationship, the attempts to make friends with Pakistan, Vajpayee’s own vacillations on Hindutva, the Kargil War, Advani’s fall from grace, the changing fortunes within the party mark the end of the Vajpayee years.

As far as structure is concerned, the bridge between Vajpayee and Modi, the second Indian Prime Minister from the BJP, is weak. We get some potted portraits of BJP leaders and some quick history. Uma Bharti was unnecessary, one feels. But the chapter on Pramod Mahajan is excellent and it does not hold back from describing both Mahajan and his role in shoring up party funds, in organising party relationships and the tragic and then strange events around and after his murder by his brother.

It is when we reach Arun Jaitley and Modi that the light hand wins over heft and the end looks like a rush job.

Jaitley is portrayed largely as he appears to journalists — affable and whatnot. However, this is hardly helpful when his main role has been as Union finance minister and the Indian economy is in a pretty dismal state. At best, you learn that he is very close to Modi, which is no state secret.

Modi himself is also wrapped in enigma. There is far less analysis of him as Prime Minister than we got for Vajpayee. Having lived and worked in Gujarat during the Modi years and the 2002 riots, I found one bracketed throwaway line that Modi had been exonerated the courts very odd indeed. It was the Special Investigative Team, which decided not to investigate the chief minister; the Supreme Court in an observation had compared Modi to Nero.

What one does glean is that the Delhi journalist does not have access to Modi, even if he knows who they may be. The story in Gujarat is perhaps a little different. Also, this book was published in 2018, which means that there is ample evidence that the Modi of 2014 is not the Modi of 2018. A bit of whitewash job here.

For the record, I met Jaitley once in Gujarat in 2002 and I found him arrogant and not affable. But at that time, I worked for a newsroom which Modi was not happy with as we were not whitewashing the events of 2002 and I have never been a Delhi journalist.

I would not want to damn Shades of Saffron with faint praise. Instead, I would say that it is immensely readable and worthwhile for the Vajpayee years alone.

Ranjona Banerji is a senior journalist who writes on media affairs, politics and social trends. She tweets at @ranjona