A racy read with lots of laugh-out-loud moments

The story is extremely readable, the credit for it goes to the decent writing style. 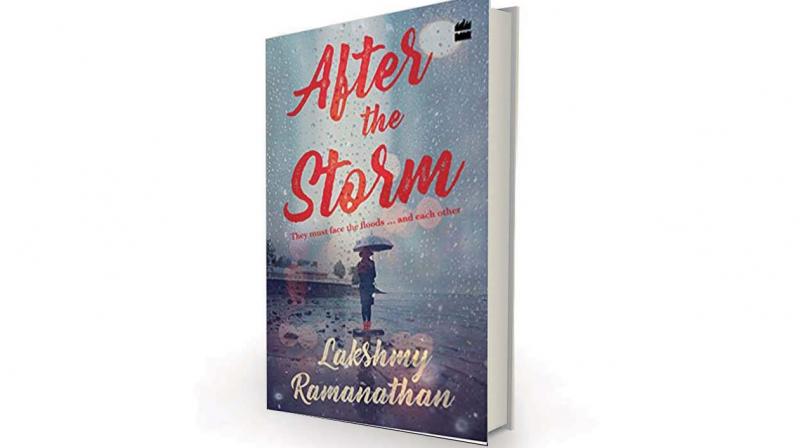 After the Storm by Lakshmy Ramanathan, HarperCollins, Rs 250

After the Storm by Lakshmy Ramanathan is the story of Meenakshi Iyer who has no inclination to put up with the sambhar mafia’s plans for her (read the match-making mom’s and aunts of Chennai). Right in the second page the reader comes to know that Meenakshi’s mother is slightly kooky, and way ahead of her times and miles ahead of her generation. Padma fondly called Padu’ma in the Iyer household, straddles the twin worlds of a Suprabatham chanting woman in the morning and a Bloody Mary sipping socialite in the evening. When the Bombay-bred Padu’ma heard that her accounts professor was leaving for Madras for an auditing post, the bold Padu’ma had landed on his doorstep to profess her love to her professor Girish Iyer. I know I’m digressing a bit, but with this kind of introduction to the mother, you know for sure that the daughter, Meenakshi, called Meano won’t be simple or an innocent girl.

Meenakshi is dragged by her mother to a wedding where two kids collide into her, making her fall into the lap of a tall and dashing man enjoying his bowl of payasam. The next day the boy with a sweet-sounding name Rakesh Ramakrishnan and his mother Usha and aunt visit Meenakshi’s house. Padu’ma feels happy that she has a connection with Rakesh, his grandmother and Meenakshi’s grandmother are from the same village.

Meenakshi does a Meano and turns down Rakesh’s proposal and lands up in Mumbai to pursue her career. She gets a job as an intern at the Daily Times. Sadly, she is saddled with the boring business desk and the even more boring job of daily scanning agency wires and market indices, searching for pictures to go with writeups and preparing the all-important list which is the compilation of stories being filed for the day. Though a bunch of interns joined with her, she is chummy with Rishi Shendurikar and Chanda Kolamudi watching them get bylines while she is unable to get any.

Let me introduce to you the dashing, flamboyant and flirty Arjun Rathore, one of the Daily Times star reporters: he is lean, athletic and has a voice that sounds like melted chocolate (Meano’s description not mine). Rathore has written two-bestselling books, the dishy dude heading the sports desk, comes to work in brightly-coloured jerseys and has put up a basketball hoop opposite his desk and has an eye for pretty girls. Arjun and Meenakshi start talking when the Mumbai rains catch Meenakshi unaware and Arjun plays her protective knight in red armour and lends her his scarlet hoody to cover her modesty. Meenakshi and Arjun hook up and therein starts the office romance that raises many eyebrows and becomes the topic of office gossip. When Arjun is short-staffed, courtesy the accident caused by one of the interns, he ropes in Meenakshi to cover sailing for him. Sadly, she still doesn’t get a byline.

Inbetween romancing with her colleague, Meenakshi meets Rakesh and his mother when she goes to a mutt near their house. Rakesh owns a restaurant called Chutneyed and is also one of its funky chefs coming up with innovative cuisines and a technique called Spherification, which has made him one of Mumbai’s hottest new chefs. Meenakshi and Rakesh start going out. Rakesh is also the caterer for the Daily Times party. It’s at this party that things turn dirty when Arjun Rathore plays the jealous lover (I wanted to nickname him Rowdy Rathore then). Not content with manhandling Meenakshi at the party, Arjun shows his unscrupulous journalist side in office.

Meenakshi and Rakesh visit Chennai to attend a wedding at a time when the city is reeling under the impact of rains that has brought it to a standstill. Meenakshi is surprised when she sees another facet of Rakesh’s character, the way he whole-heartedly plunges himself into relief work with her younger brother Krishna.

In November and December 2015, all the newspapers were filled with pictures of a flooded Tamil Nadu. When I saw the pictures, I was absolutely certain that some smart writer will weave this incident into a story and Lakshmy Ramanathan turned out to be that smart writer. She did the wisest thing by including rains and the way it affected the city into the story. For me these chapters were the high point of the book.

I always enjoy stories where I get to know more about another culture or profession. So, this book definitely had sufficient appeal for me. I got to know about the way of the sambhar mafia and their views on matrimony and their obsession with engineering, and also what an intern at a daily newspaper did and what happens when ambition hits the hard wall of survival in journalism.

I must mention this, that initially I found the character of Meenakshi lacking in gravitas, but by the end of the book she made her presence known as the conscientious journalist eager to write a hard-hitting story. In fact, I adored her mother and Rakesh, even the minor characters like Usha and Pinky Sabharwal the entertainment head and Shahroukh Mistry the associate head of the newspaper where she worked, a lot more than Meenakshi. If her character had been fleshed out more, it would have elevated the book to another level altogether. The story is extremely readable, the credit for it goes to the decent writing style, it has lots of laugh-out-loud moments, but at times I felt there was a bit more telling and not enough showing (the cardinal rule that is hammered into every writer’s head, show but don’t tell is at times overlooked). But the racy pace didn’t allow me to linger anywhere and at no point did the narrative slacken or meander into boring territory.