A litany of Imran’s failings and sins, or Reham Khan’s?

Reham is careful to describe her own unquestionable piety, unwavering faith in the tenets of the Quran and her devotion to her marriage. 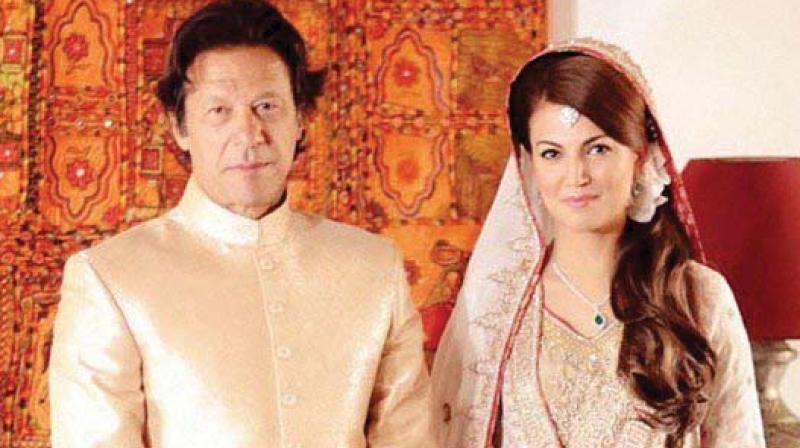 No one’s going to be buying Reham Khan to read about Reham Khan, nevermind the book’s unabashed title. The parts that most people are going to want to read begin only around the middle of the book, which is over 300 pages long. Some 200 pages are not about IK — as she often refers to Imran Khan — and his dissolute life.

There’s a 40-year run up to the moment when Reham finally meets Imran — a prolonged prelude that is really better reading than the main act which follows. She recounts a privileged expat childhood with her parents and siblings in Libya, a late ’70s paradise which was echoed over many West Asian countries at the time: a halcyon period before superpower meddling and Islamist revolutions. The family returns to Pakistan when she’s a young girl, and she has an early stint as a child artiste on television. This is followed by her marriage, when she is 18, to a man she barely knows — Ijaz Rehman, a first cousin in the UK. The marriage is claustrophobic and abusive, and her husband uses every petty tyranny to make her miserable for almost every day of the many years she was married to him. She walks out on him, with whatever she can carry in a suitcase, when her eldest child has almost finished school. 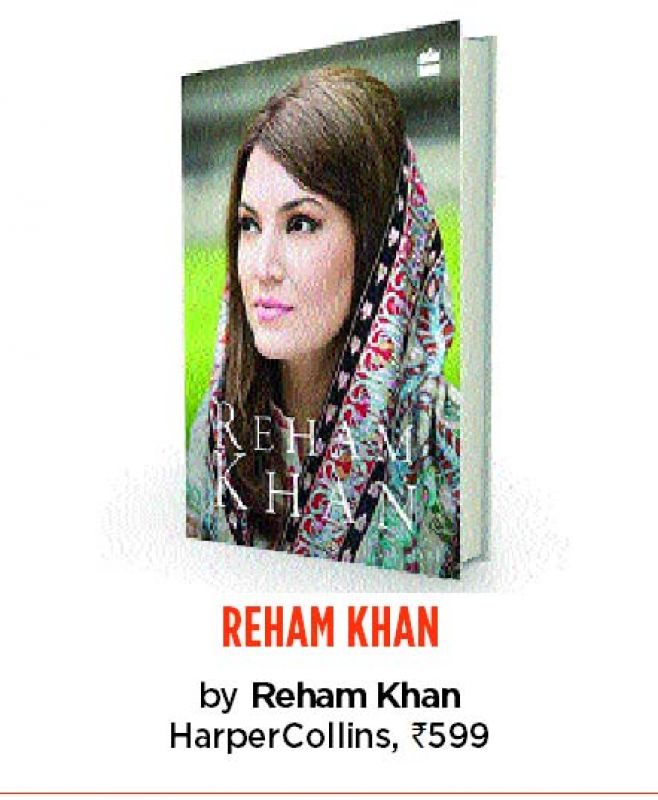 Ijaz Rehman is one of the many people threatening to sue Reham Khan for libel. He has given statements to the press alleging that it was all the other way round, that she was greedy and manipulative, that he gave her lots of money and paid for childcare, that he has court documents to prove this, that she does black magic — no, hang on, maybe she is black magic. And maybe there is another telling of this, and indeed of all other parts of her story. Still, her descriptions of the marital abuse she suffered are convincing, in the detailing of the minute events which made up the behaviour of an insecure, controlling, insensitive spouse. It’s a familiar story — the man who insists on accounting for every minute of your day, who withholds money and affection, who targets the children, who criticises everything you do.

Many years go by before Reham has had enough. She grows up, and is willing to do anything to get away. In an impressive transition, she starts doing door-to-door sales and moves on to television jobs — eventually working not one, but two jobs, and keeping it all going somehow. The transformation is liberally spiked with feminist homilies. I found myself underlining a number of them, my favourite being “If you think you can’t do something, or can’t have something, remember that perhaps it’s just because you haven’t given it a go yet.”

This Reham is a likeable person. One moment in particular stands out — she used to leave her home at five every morning, because of a very long drive to work. But she enjoyed those drives, especially the quiet moments when she had to stop for sheep crossing the road. She’s at her most human in this moment — a hardworking mother-of-three enjoying a solitary moment of reprieve in the half-light of an early English morning, behind the wheel of her car, sheep crossing in front of her in a quiet country lane.

Eventually she moves back to Pakistan, and we sit up, ready for the revelations.

But here, in a confusing switch of genres, the feminist survival-memoir is chucked aside in favour of pulp romance. And why not? Imran Khan might well have sprung from the pages of a Mills and Boon — anyone who was a teenager in the 1980s would remember him taking the long sprint up for a fast bowl, his dark hair streaking behind him, an incredibly beautiful man. Reham casts herself as Bennett to his Darcy and the two glower at each other across crowded rooms, snap childishly at each other about nothing, and are irresistibly drawn to each other until finally…

He leant forward to kiss me, then groaned and got to his feet… He started to say something, and as I looked up expectantly, he instead closed the distance between us and leant down to kiss me. It was a light brush initially. I froze in fright…

I’m afraid I burst out laughing when I read this — at the absurdity of life being cast in the tone of the cheap-thrill romances that our aunts and grandmothers assured us had nothing to do with “real life”. But Reham assures us that Imran immediately proposed marriage, right after that first kiss (just like in the books). Unfortunately, we all know how this one ended.

They don’t marry immediately. There’s some understandable dithering from Reham’s side, but then he meets her children and is charming to them, besides doing his best to be nice to her as well. Finally, there’s a ceremony and though they try to keep it quiet, news gets out. Then they dress up and do the photo-op that we’ve all seen.

Reham miserably recounts how he changed out of his gold sherwani into tracksuit bottoms immediately after, ignored her and was generally cross and surly. It sounds like the kind of thing that might happen — weddings and photo-ops are never fun for the bride and groom, and it must be harder to feel enthusiastic about them when you’re both middle-aged and on your second marriages. I felt quite bad for Reham here.

But then, I also felt bad for Imran Khan. It’s one thing to look like a prince, it’s quite another to be one in a tell-all by your ex-wife, in which you’re shown up for the frog that you are. Reham is unsparing and nothing escapes her notice: His awful table manners, his disgusting bathroom habits, his badly-kept house, his horrible father and sisters, his long-suffering mother, his vicious dog, his terrible, terrible ex-wife (Jemima, who has also threatened Reham Khan with libel), his cynical politics, his sycophantic hangers-on, his ignorance of just about everything, his jealousy and suspicion... And then, bigger things: his drug habit, his bisexuality, his political compromises, his very strange friends.

Reham spends a long time discovering things in drawers — joints, packets of white powder and tubes of KY jelly. While we face-palm, she innocently asks her husband what it is that jar sitting in the bedside drawer. He laughs at her naivety, or explodes in rage.

I’m sure a lot of this might well be true. But the question is, what does it add up to? Not very much. The first half of the book, about her first marriage, makes for far better reading because there’s much more psychological depth in her analysis of it. She spent over 15 years with Ijaz Rehman after all. But the 10 months or so that she was married to Imran Khan sound like the marriage of two people who rushed into it without knowing each other at all. It’s little more than a list of Imran Khan’s failings and sins, often with incredibly minor events recounted to illustrate major character flaws. Reham, on the other hand, is careful to describe her own unquestionable piety, unwavering faith in the tenets of the Quran and her devotion to her marriage. If all that’s true, I feel bad for her too — married to a depraved narcissist, when she wanted a saint.

But there are some undeniably bitchy bits she lets slip in, for which, I believe, she must indeed be sued. While taking considerable pains to cast herself as a feminist battler, she thinks nothing of maligning a number of women. I won’t repeat what she says here, but she certainly names and — gratuitously — details their private, sexual history with Imran Khan as well as other people. And, unforgivably, a miscarriage that Jemima had and was very upset about. The only reason I mention this here is that I was appalled by Reham Khan’s insensitivity in disclosing it to the world. It is really no business of hers at all. Though, in my opinion, she sinks to her lowest when she criticises his children with Jemima, comparing them unfavourably to her own.

A number of reviews have called Reham Khan’s book brave. And, in the hands of a better editor, it might have been. The book needed analysis and reflection, a toning down of the urge to disclose “everything” in order to lay before the world, as she’s claimed her motive to have been, what kind of man the current Prime Minister of Pakistan is.

Maybe he is awful. But then, despite herself, Reham does paint in a few rosier shades. Unexpected things, like wanting to dance with her all night to Dr Hook singing the classic, When you’re in love with a beautiful woman. Leaving out flowers for her. Hugging her all night. His tenderness for his children. His friendship with Jemima, in spite of it all. And — something I truly empathised with — his terror of lizards.

There are other things in the book about how surprised and disgusted Reham is by the political corruption she finds all around her, but you’d have to be an avid follower of every minor episode in Pakistani politics to find it interesting. I tried to follow, but lost interest soon, coming away with the usual subcontinental tale of favours for gifts and gifts for favours.

Imran Khan has been getting very good press since he became Prime Minister, and interest in Reham Khan’s book seems to have waned for now. But her memoir will haunt him for a while. Behind it, there’s an angry and upset woman and — if she only knew it — an even angrier and upset man.

Anupama Chandra is a film editor and bibliophile