Can’t China do for India what US did for China?

The Complete Story of Indian Reforms, 2016. His latest is a career first, deep-dive into geo-political economy. 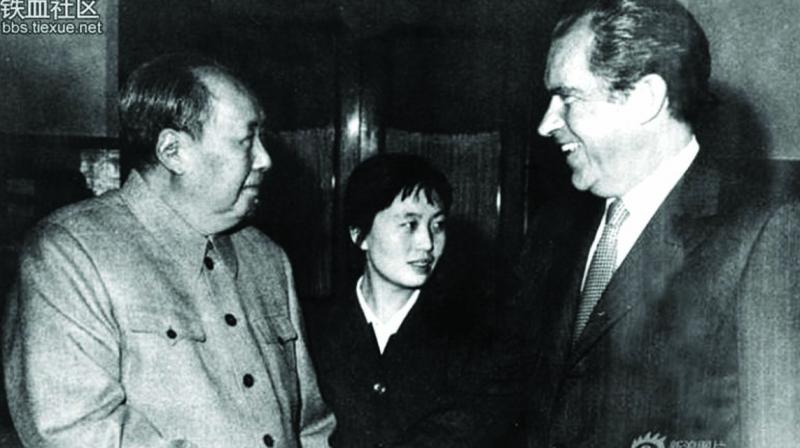 US President Richard Nixon’s historic meeting in 1972 with Mao Zedong, chairman of the Communist Party of China.

Pradip Baijal is a pugnacious reformer with a ferocious appetite for taking on challenging assignments. This reviewer remembers vividly Baijal, as Secretary Disinvestment in 2002, walking in the sweltering summer heat from the North Block to the hoi polloi car park around the fountains below Raisina Hill, where the taxi, which served as his official car, was parked. For Baijal life is not worth living without a challenge to overcome and importantly, win.

This was reflected in his stellar performance in the Ministry of Disinvestment during the Vajpayee government. Publicly owned companies and hotels were privatised rapidly over three years before resistance from vested entitlements built up. Subsequently, as Chairman, TRAI, he initiated light touch regulation, which grew the Telecom market exponentially. His professional life in encapsulated in two previous books — Disinvestment in India, 2008 and A Bureaucrat Fights Back:

The Complete Story of Indian Reforms, 2016. His latest is a career first, deep-dive into geo-political economy. A panoply of data, informed opinions and historical snippets, including a handy chronology since the 1940s of key events which to define the convergence of India, China and the US support the key argument that the US should help India become a counterweight to China in precisely the manner it helped China to grow.

Baijal meticulously records how China used the cold war fuelled US anxiety in the 1970s to contain the Soviet Union, by pretending to participate in the US project of “democratising” and guiding it into the open-economy, growth supportive compact of the non-communist world.

China’s real intent however, was to understand the dynamics of capitalism; access technology and foreign capital — China and India had comparable GNI per capita levels till 1980- grow its economy and gain entry into key multilateral fora like the World Bank (1980) and the World Trade Organisation (2001) without conforming to the required covenants of reciprocity and fair play. It thereby, transformed itself into the factory of the World without abandoning  its “exceptional” status as a relatively closed economy, ruled by an “iron fisted” authoritarian, albeit meritocratic, regime with a dodgy human rights record. 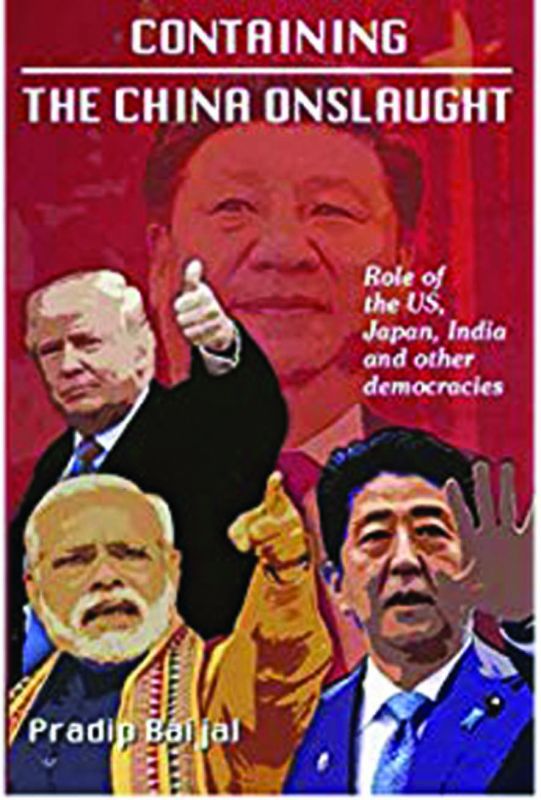 Containing the Chinese Onslaught: Role of the US, Japan, India and Other Democracies, by Pradip Baijal Quadrant pp 264; Rs 499.

Deng Xiaoping engineered the US-China détente with assistance from Singaporean strong-man, Prime Minister Lee Kuan Yew in 1972. His continuing political influence till 1997 — when he died — ensured that the Communist Party of China Politburo never wavered from their path of remaining politically Chinese whilst transforming its economy along neo-liberal principles of markets and competition albeit within the Chinese characteristic of State control, thereby playing to the letter rather than the spirit of the “Free World”.

Baijal believes that by 1980 Soviet Russia was already doomed and the US overplayed its hand in assisting China as an international debutante and that the American mind is too simple — too direct possibly — to grasp the complexities and nuances of the Chinese principles of statecraft. The defining 36 stratagems defining, boil down to ends justify the means, remaining below the radar, hiding your intentions, opinions or strengths, using attrition to exhaust the enemy before using every opportunity of hitting him hard. One wonders how the Indian preference for braggadocio and argumentation measure up against Chinese guile.

The Chinese economic engine that President Nixon and Henry Kissinger set throbbing in 1967 is today a fearsome, looming cloud of global domination, which might devour its own benefactor by as early as 2030. The Yuan/Remnibi’s clout is growing versus the US dollar which it seeks to substitute as the preferred global reserve currency. This would sever the fiscal jugular of the US, which feeds on owning the US dollar which the rest of the world has to worry about.

The author views Donald Trump is the first US President to recognise the existential threat that China presents to the rules of international engagement and mutual benefit, cultivated over years by democratic, open economies. He has courageously caught the Dragon by its tail to slow down its march. But the US cannot do this alone. They need help. The solution Baijal proposes is for the democratic world to unite and push back against Chinese domination, led by the US, Japan and India along with South Korea and others.

Some of this is happening already with a muscular India under Prime Minister Modi. Strategic cooperation to keep the Indo-Pacific open is already on the cards. India has increased tariffs on selected imports from China just as the US has on a range of goods including metals. India chose Japan over China for building its “Bullet Train”. So, is Baijal merely echoing existing geo-political fashion in arguing for such cooperation or is he defining it and how realistic is this strategy?

The US might wish to contain China but is growing India into a second economic monster its only option? President Trump’s near term objective is to quit the fiscal drag of Afghanistan. For this he needs Pakistan to reign in the Taliban and force them to an agreement. The US has always hyphenated India with Pakistan and walked a tightrope between the two, barring some recent sabrerattling on the incubation of terror by Pakistan. How consistent is the US as an alliance partner? How deep is their commitment to Taiwan today? And could not our growth also be moderated by forcing us into a version of the Plaza Accord as Japan’s was?

Consider also that Japan is an insular, ageing, export dependent economy. Why should Japan wish to upset China which absorbs 19 per cent of its exports, same as the US, whilst exports to India are just 1.3 per cent of their total exports?

As Baijal himself notes, Chinese and Saudi capital inflows, bridge the chronic current account deficit of the US, whilst US exports of services to them partially fills the merchandise trade gap. Dumping of US dollar denominated securities by China could destabilise the US economy. For all of President Trump’s fire-and-brimstone pre-election act, the US and China are tied at the hip.

Also cannot China do for India what the US did for China? The incentive for a China-India détente is clear — it relieves each neighbour of spending resources to watch its back. We have common friends — Iran and Russia. Europe doesn’t share the fear of Chinese domination. China could be our flying goose in whose slipstream we could follow, as Japan was for Korea in the 1970s.

The real issue can we set ego aside and accept Chinese “suzerainty” or at least pretend to do so, just as China pretended to be “democratised” by the US. Also are we really ready to pull out all the stops to growth with equity? And do we have a Deng Xiaoping who can humble himself over three decades to serve the average citizen? The answers are not in this book. But reading it might stimulate some original thinking.