Book review: Deceit, lies galore in this race to the top

Once the elections are announced, a bunch of students start tearing the snooty school apart with their desire to win. 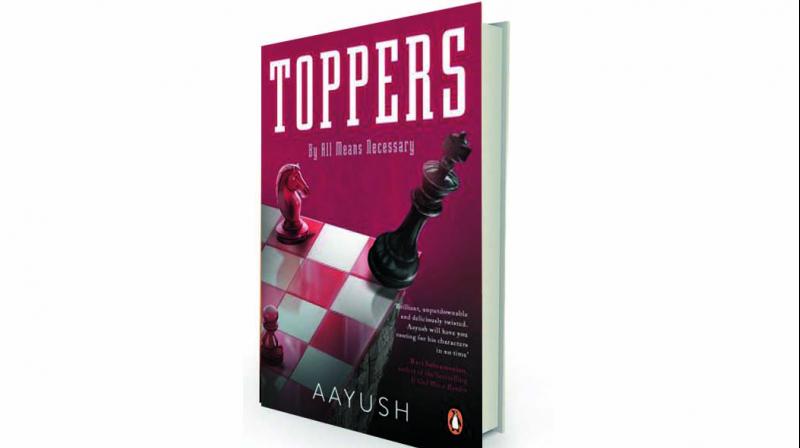 When I read the blurb of the novel Toppers by Aayush, I had a strong sense of déjà vu, the story reminded me of the movie Student of the Year by Karan Johar. It had the same theme — a bunch of students vying for a title. I put the book aside thinking that I’ll tell my editor that I don’t want to review it. But something, call it a strange attraction, made me pick it up a few days later, and I started reading it.

Toppers is the story of the top students of the elite school Woodsville Scholars International — a school that resembled Lutyen’s colonial era design of the Rashtrapati Bhavan, situated in a 200-acre campus in Central Ridge area of Delhi. The boarders of this school stayed in two-storey villas (you can’t get more pretentious than that) which came with a helper and provided single sex housing for four students. The school was founded by B.S Walia, a man who loved playing kingmaker and enjoyed manipulating his star students towards their full glory. He even made them undergo regular counselling sessions from the school counsellor Dr Athar. Walia was a shrewd man, he wasn’t averse to making deals with the movers and shakers of society and reaching all kinds of compromises to keep his school’s reputation spotless.

Needless to say his students matched him step for step where the game of one-upmanship and power play was concerned. Let’s meet the toppers, who each had a motto which they adhered to fanatically. Dev Bhushan, the cricket star who had led the school to many victories and was considered a rockstar among students, Aniket Jain, the all-India topper in Class 10 boards, this academically inclined boy hated losing, his worst nightmare was coming second. Then there’s Himanshu Pathak, the boy who preferred blending into the background. He loved photography and had stage fright, Vishakha Sahdev, the girl with a penchant for being in the limelight, Rikkhe Rajput son of Rana Dhananjay of Jahalgarh, the polo prince of Woodsville who loved his horse more than anything else in the world and had his personal bodyguard accompanying him everywhere.

Most of these toppers with a few others (the story isn’t centred around them, so I haven’t introduced them to you) are vying for the title of “Head Scholar” of the school. This position has a lot of prestige and power. Not only is the head scholar the de facto head of the student body, s/he also gets a full scholarship for their higher education. Earlier the head scholar was chosen from one of the students studying in Class 11, by the director, but thanks to Aniket who in his topper’s speech at the start of the year, stirs up a hornet’s nest by asking for elections for this post.

Once the elections are announced, a bunch of students start tearing the snooty school apart with their desire to win. It becomes a free fall where skeletons tumble out of the cupboard, each candidate accuses the other of playing dirty, there is plenty of baiting going on. Into this heady mix of power hungry toppers, enters a 13-year-old orphan, a child prodigy Ramanujam, who is even more hungry and greedy for power. Ramanujam’s entry raises the stakes, making the elections dirtier and the means to achieve the victory evil. His no-holds-barred approach can give the nastiest of villains serious conspiracy goals.

Though Aayush has handled the twists with a deft hand and has kept the pacing quick like a brisk thriller, I have a few complaints, as Toppers left me with several unanswered questions. A little bit of backstory which explained each topper’s history with the other would have done the story a world of good. And I also kept wondering why there was so much animosity between them. What had happened in their past to make them lock horns so fiercely now? And some description about the topper’s physical features/appearance would have made them more real in the eyes of the readers. I had no idea how each one looked.

Also, Aayush kept introducing students that my mind reeled under the impact of so many names.

I was dying to know why Ramanujam had it for a few students, this boy had just entered school, so what was the reason for his animosity and behaviour? Was it angst, because most of them came from a privileged background, while he was transferred from one foster home to another?

Till the middle of the book, I didn’t emotionally connect with any topper — they all appeared too cunning for my taste. In fact, I didn’t find any redeeming qualities in most of them in the beginning, but towards the end, a few of them managed to wriggle into my heart and I fervently wished good for them (If I say more I’ll be giving away the spoilers).

I also found the students far too ruthless and ambitious for their age. At 17, most of us are busy enjoying life and not plotting against our competitors. But the toppers were not just training for a rat race, but manipulating the other rats in the race to achieve their goals. Whatever the shortcomings, the book made up for it by being racy and hurtling me towards a satisfactory end.