Review of 'The Ink Black Heart' By Robert Galbraith 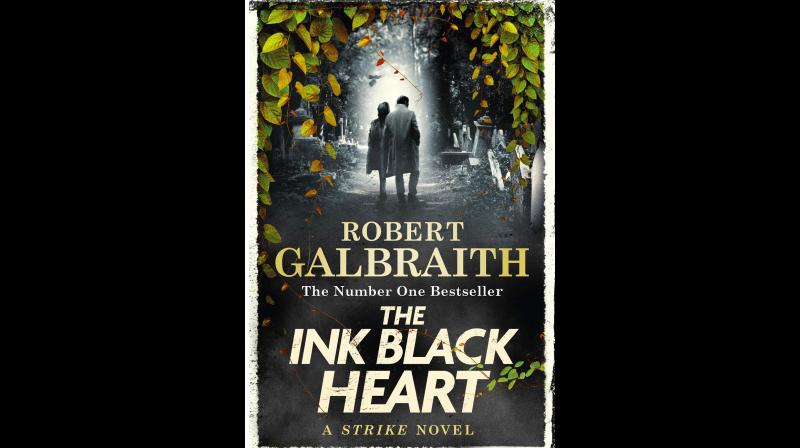 Warning: this may upset some people

I first read a review of Robert Galbraith’s latest offering, The Ink Black Heart on the NPR website. The so-called review’s basic contention was that the author had attacked the trans community for the attacks which they had made on the author ever since the author spoke out in favour of women. The author’s revenge was to make the trans community the villain of the book and present the author as a fake “victim”. An expression if you will of the author’s self-bloated self-importance.

Galbraith is a penname used by J.K. Rowling for the Cormoran Strike detective series. Then, it was an attempt to separate herself from her legendary Harry Potter series and the fame it brought her.

Now Rowling also has to deal with the infamy that her support of women has brought her, and the enormous anger of a large group of liberals and trans rights activists.

I don’t want to go there because of all the social media implications, but how does one not in face of such accusations?

From book 1, I like many others have been a fan of Robert Galbraith’s Cormoran Strike series. I bought the first book because it was by Rowling and got hooked. There is my general addiction to crime fiction. And then soon it was the style, and the characters themselves.

Some reviews of her sixth offering in the series focused on the trans angle. And presented the fact that the chief murder victim, Edie Ledwell, was killed because of a trans person or comment or some such convoluted logic. When the fifth Strike book Troubled Blood appeared, that was a similar accusation that Rowling had vindictively made the murderer a cross-dresser.

The power of social media is such that you do not actually have to read or see something yourself before you sit in judgment.

And in fact, one of Rowling’s chief villains in Ink Black Heart is both discourse on social media and how easy it is to change that discourse.  The other and possibly bigger villain is the alt-right.

A writer of a popular YouTube cartoon series, Edie Ledwell, is murdered. Some of her fan club is allegedly happy — on social media at least — because they see her as a sell-out. She had sold the franchise to Netflix and the fandom decided that her co-creator Josh Blay was unhappy with the decision and so was she. Some fans had created an online game based on the Ink Black Heart cartoon and Ledwell was not happy with that. The fans who ran Drek’s Game are not angry with her, they also celebrate her death.

Into this minefield enters our detective agency. Like all of Rowling’s writings, there is a lot happening. There are wheels within wheels, there are false clues, red herrings and a couple of side stories as well, apart from the longstanding parallel story of the relationship between our “hero” Cormoran Strike and his business partner, Robin Ellacott. The last book, like the one before and before, ended on a cliffhanger as far as that relationship went, will-they won’t-they and this sixth instalment is no different.

The extent of detail is sometimes the killer for Ink Black Heart. It is not always easy for the reader to negotiate or remember. Potential suspects come and go, as Strike’s firm is hired by the murder victim’s family to bolster the police investigation.

The book is long, maybe too long at over 1,000 words. The weird world of social media and the equally mysterious world of fan fiction which came to life through social media is not necessarily easy to understand. Beyond bloody murder and the chase between justice and crime, it is the manipulation of minds via suggestion and propaganda that is The Ink Black Heart’s main theme.

The biggest complaint however ought not to be the one throwaway line about a fictional hermaphrodite worm in a piece of fiction.

It is that the social media chats and chats within those chats are almost impossible to read, regardless of the note from the publisher. Both in print and on electronic devices, the print is too small, the font is too unfriendly. This is both a technical fault as well as a writing fault – to depend too much on what would be an epistolary novel in one that is not, is a massive distraction.

The brilliance of Rowling’s quite funny takedown of social media is marred by form.

However, Rowling’s dive into cyberspace’s hatred, anger and reactions presents a very sad commentary on lives lived by social media and one that the characters in the book learn largely the hard way.

By the time you negotiate through all this, there is a murderer and it might be the person you picked out at the beginning, and it might not.

But there’s one definite guarantee: it’s not whom social media decided it was and it’s not whom the angry reviewers who did not read the book decided either.
Apart from being too long and despite all the side streets to negotiate, you still want to know who and why.

And await the next instalment.