Review of 'These Errors Are Correct' By Jeet Thayil 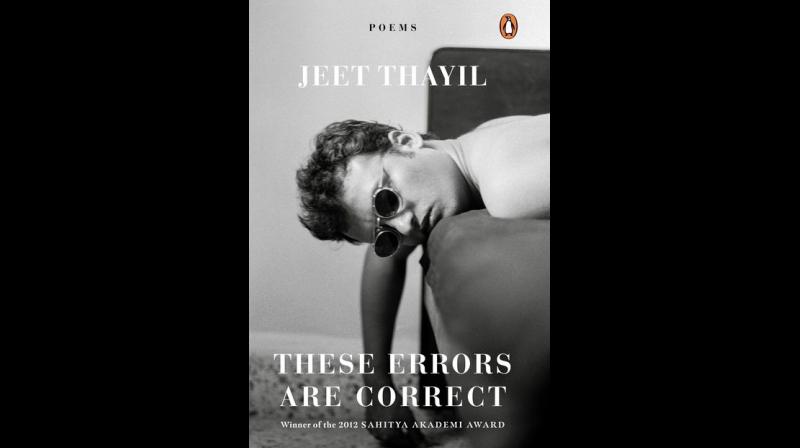 “Please take me out to a field at dawn, give me a last cigarette, blindfold me, and dispatch me with a merciful shot to the head. I am done with this thing," says Jeet Thayil in his interview with The Week while talking about his recently released 800-odd-page appetising anthology, The Penguin Book of Indian Poets, which came under fire for misrepresentation.

This is a year of poetry for him — and surely an interesting one — as his 2012 Sahitya Akademi awarded poetry collection, These Errors Are Correct, has been brought out by Penguin Random House India, with a brand new cover that depicts a somewhat cloyed and down hearted young Thayil.

Originally published in 2008, and later got out of print in 2010, these poems bring into focus the themes that will eventually preoccupy Thayil’s work, grief being at the core. Rather one sees a clear trajectory from a personal loss, to the loss of language and time, which goes on to a much more encompassing loss of a polyphonic, secular past when he says, “[I]n the streets, death, in saffron or green,/rode a cycle rickshaw slung/with megaphones.”

Beginning from the attack on the World Trade Centre where “[he] saw a tide of fleeing figures, some covered in the phosphorescence of ash and dust”, to the Bush administration's invasion of Iraq, and to the devastating shock of losing a wife — to whom this collection is dedicated — grief, Thayil mentions in the introduction, fogged his consciousness while he was working on this.

But neither are these poems gluttonous on grief, nor does Thayil choose the typical poetic way of chronicling it, his treatment makes loss look like an arch nemesis, that despite our back-breaking attempts to fight back, would never be defeated. This is what gives these poems a terror-like quality, stabbing us quietly, and that too, at quite unexpected moments. Deadpan humour and an undercurrent of sarcasm run through most of these poems:

Sample these:
Everybody forgets every dear thing.
I know how it goes. This is safekeeping. (“Premonition”)
Or,
And if the sickness/takes off its pale blue/mask and apron, what then would we recall/of pain? It comes to us all.  (“The Annotated Gita”)

A reader will also find resonances in the elaborate linguistic contortions and his experiments with formal poetry. Rhymed syllabics, terza rima, ghazals, sonnets, the sestina, and the canzone make up a huge chunk of the collection. If that's not all, Thayil, in poems like “Dear Heptanesia” and “The New Island”, uses altogether new, self-invented forms.

Even while talking about distress, he doesn’t compromise on the playfulness of the language. He is almost seen juggling with the words, walking on the tightrope between sensory quality and the meaning, creating an intelligent shift of line or a turn of phrase that mostly astonishes us.

This is an assured collection with a huge appetite that demands reading and re-reading.