YouTube removes Shirish Kunder’s Kriti due to copyright claim by Nepali filmmaker
Entertainment, In Other News

Aneel Neupane had stated that plot of Shirish's 'Kriti' was lifted off his Nepali short film titled 'BOB'.

Aneel Neupane had stated that plot of Shirish's 'Kriti' was lifted off his Nepali short film titled 'BOB'.

Mumbai: It was just yesterday that director Shirish Kunder filed a legal notice and sought a written apology from Nepali filmmaker Aneel Neupane, who claimed that short film 'Kriti' was copied from his own short titled BOB.

Now, in an interesting turn of events, YouTube has taken down Shirish's film stating 'The video is no longer available due to copyright claim by Aneel Neupane'. 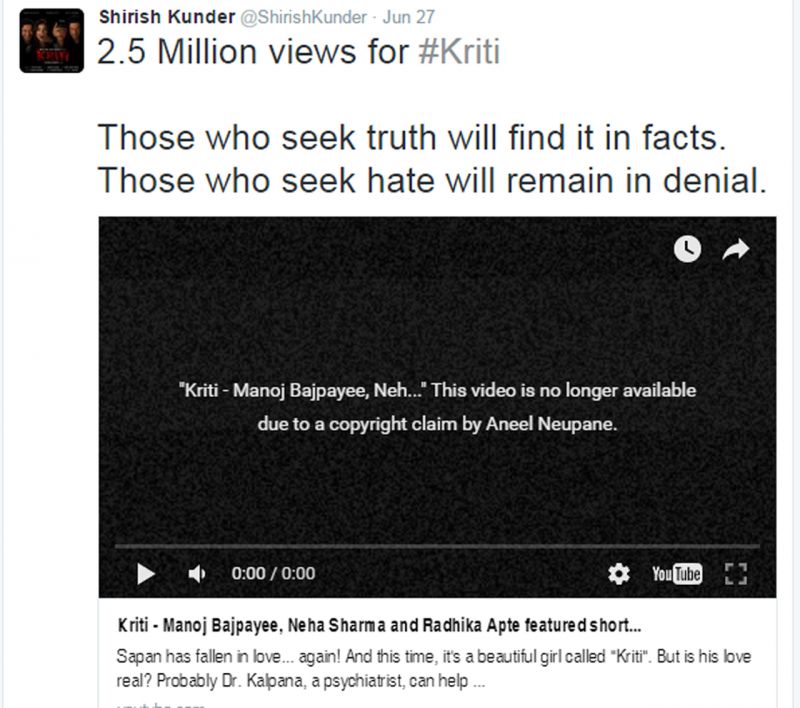 In an open letter, Aneel had stated that plot of Shirish's Kriti was lifted off his Nepali short film titled 'BOB'. Apparently, the film was ready in October 2015 and he uploaded it on Vimeo as a private video to share it with close friends. Aneel then released it on YouTube on May 12 this year.

In response to Aneel Neupane's plagiarism claims, Shirish filed a legal notice on June 27. He said that he completed shooting the film in February 2016 and after putting in several months into post-production process, it was published on June 22, 2016.

Shirish further added that he could not have obtained a copy of BOB. The filmmaker alleged that because the script of 'Kriti' was with a few people, it is possible that Aneel might have came across it and made BOB.

He has not only asked Aneel to refrain from making any oral or written comments on 'Kriti' but has also demanded that 'BOB' should be taken down from the internet immediately.