Shilpa Shetty pens down an emotional poem for her 'loving and kind' father
Entertainment, In Other News

Shilpa Shetty with her parents.

Shilpa Shetty wrote a heartfelt message about her late father Surendra Dejoo Shetty a couple of days after he passed away due to cardiac arrest.

Surendra Shetty passed away on Tuesday at Ambani Hospital in Mumbai following a heart attack. His funeral rites were conducted on Wednesday at Pavan Hans in Juhu where Shilpa, her sister Shamita and her well-wishers were seen arriving at the crematorium.

The actress posted on Instagram a picture of her "loving and kind" father along with a heartfelt message that commemorates his memories and legacy in the family.

Loving and kind in all his ways,

Upright and just to the end of his days;

Sincere and true, in his heart and mind,

Beautiful memories, he left behind.

A link in our family chain is broken,

He has gone from our home,

But not from our hearts.

Shilpa concluded the message writing, "We love u Daddy, you have been the best father , husband, friend and soul...May you Rest in Peace." 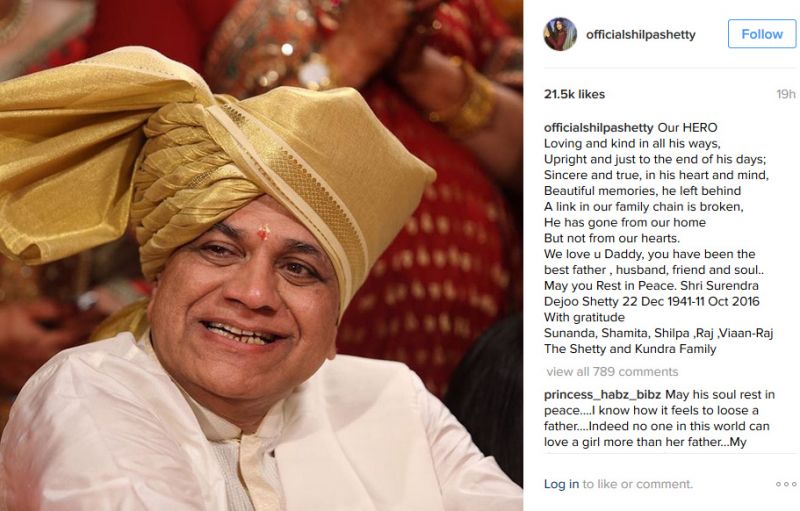 The funeral ceremony of Surendra Dejoo Shetty, who breathed his last on October 11, was held in Mumbai yesterday.

Several Bollywood celebrities including Akshay Kumar and Abhishek Bachchan were present at the funeral ceremony to pay their last respects to the departed soul.