Impressed by Ranbir's 'Chandni' act in ADHM, Rishi Kapoor wants to return the favour
Entertainment, In Other News

A twitter user recently shared a video from the ADHM sequence, terming it the best thing about the film.

A twitter user recently shared a video from the ADHM sequence, terming it the best thing about the film.

Mumbai: Ranbir Kapoor’s ‘Ae Dil Hai Mushkil’ released on Friday and the film has been doing well at the box-office. While his parents, Rishi Kapoor and Neetu Kapoor, were spotted at a screening of the film few days ago, we don’t exactly know what they thought of their son’s performance in the film. We are especially eager to know what they thought of Ranbir enacting a sequence with Anushka Sharma, similar to his father's and Sridevi’s from the film ‘Chandni’.

A twitter user recently shared a video from the Ranbir-Anushka sequence, terming it the best thing about ‘Ae Dil Hai Mushkil’. And Rishi Kapoor just had the perfect response to the compliment, saying that he would also love to do a ‘take-off’ on his son soon. 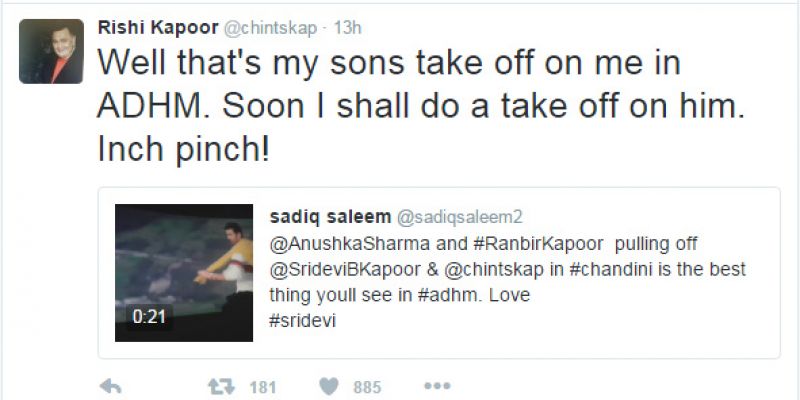 Rishi Kapoor had also termed Ranveer Singh-Vaani Kapoor’s ‘Befikre’ as an ‘adult version’ of ‘Chandni’. The film has suddenly been brought back into the limelight.