'Don 3' is easily the most anticipated sequel yet, thanks to Shah Rukh Khan's immense popularity as Don.

'Don 3' is easily the most anticipated sequel yet, thanks to Shah Rukh Khan's immense popularity as Don.

: 'Don 3' despite of not being officially announced is easily the most highly anticipated sequel of all-time.

Farhan Akhtar pulled a major casting coup by getting Shah Rukh Khan to play the iconic character, originally portrayed by Amitabh Bachchan, in his remake.

Such was the response to SRK getting back to being the anti-hero that the film immensely generated a massive fan following, much more humongous than its predecessor's, resulting in an equally successful sequel.

But then Farhan began concentrating on his acting career and filmmaking took a backseat.

However, the hype surrounding 'Don 3,' which he had announced immediately after the sequel's release, never died down.

But if things are as they seem to be, Ritesh Sidhwani might just have dropped a major hint on the status of the film.

Farhan's partner at Excel Entertainment, Ritesh shared a picture of Shah Rukh Khan as Don on his Instagram feed.

However, what caught everyone's fancy were his hashtags, which included 'Don 3,' with the producer urging his followers to stay tuned. 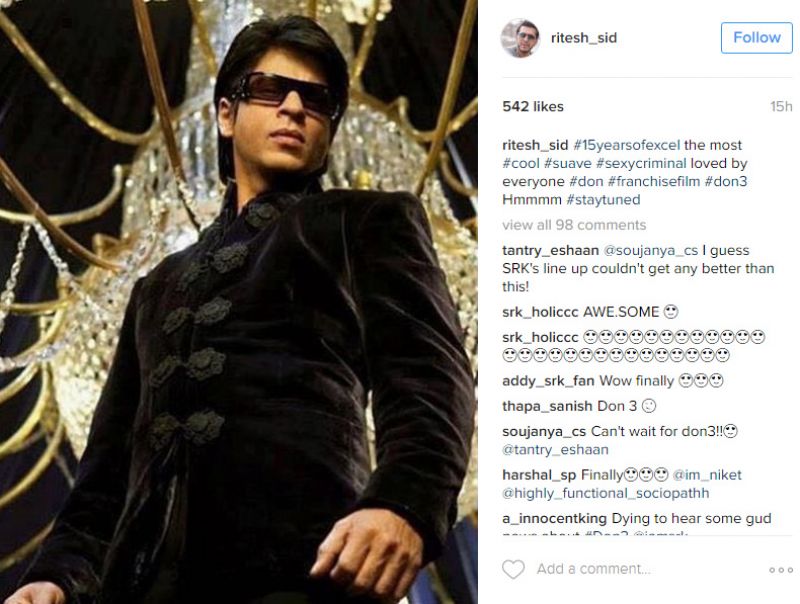 If all goes well, Farhan could well be returning to the director's chair to helm Shah Rukh Khan at his most iconic avatar.

However, as had been reported earlier, Priyanka Chopra, who's making waves on western shores, won't be returning to reprise her role as Roma. Katrina Kaif and Jacqueline Fernandez had been touted as potential replacements, courtesy their extremely agile physicalities. Katrina had also expressed her keenness to be a part of the film.

Fans definitely can't contain their excitement post this development and we can't, either!