DDLJ or KKHH Arjun and Shraddha enact train sequence for Half Girlfriend
Entertainment, In Other News

Arjun has shared a picture of Shraddha standing at the door of a leaving train while he runs behind it.

Arjun has shared a picture of Shraddha standing at the door of a leaving train while he runs behind it.

: Arjun Kapoor and Shraddha Kapoor have been working on their film ‘Half Girlfriend’ based on the novel written by Chetan Bhagat and recently wrapped a schedule of the film in New York where they were seen dancing at the Times Square. Another picture of Shraddha hugging Arjun displayed their strong chemistry.

Arjun has now shared a picture of the pair enacting a sequence for the film where a sad Shraddha is standing at the door of a moving train with Arjun running with it. 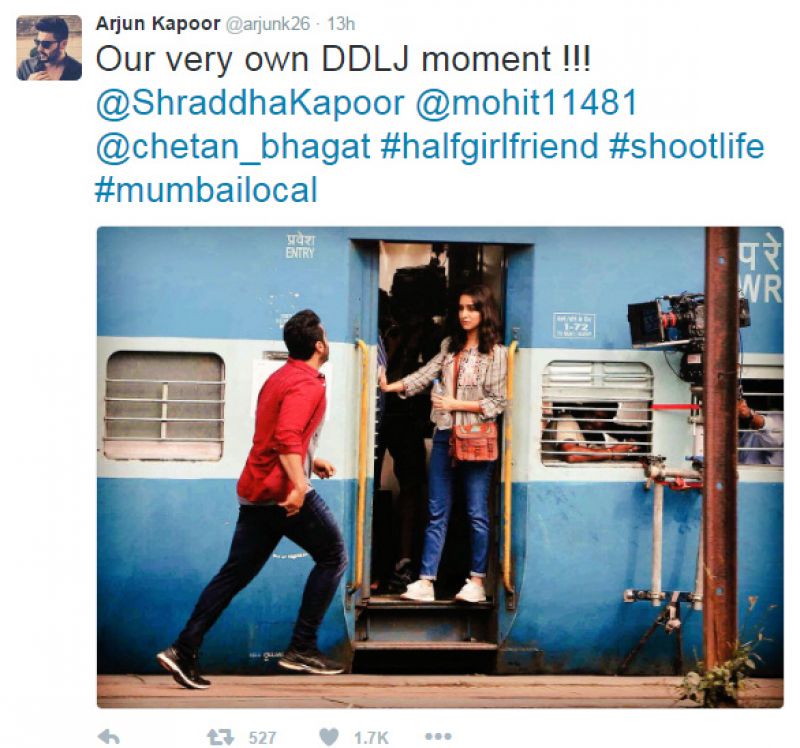 He captioned the picture as ‘our very own DDLJ moment’. But in the film ‘Dilwale Dulhania Le Jayenge’ it was the hero, played by Shah Rukh Khan, stretching his hands out to get the heroine, played by Kajol, inside the train and here it is somewhat the other way around.

This scene from 'Half Girlfriend' could be more similar to 'Kuch Kuch Hota Hai’s scene of Shah Rukh convincing Kajol not to leave, as he runs with the train.

It wouldn’t matter to the fans which film the scene is inspired from, as they would only be anticipating the release of the Mohit Suri directorial which is releasing on May 19 next year.