Warning! quicksand ahead in West Asia

The restoration of the “legitimate” government of Abd Rabbo Mansour Hadi, in whose name the war was initiated, remains a remote prospect. 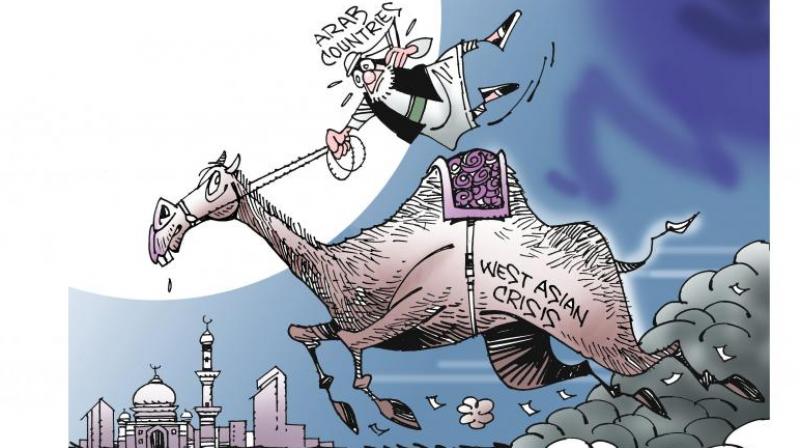 At present, no country or group is pursuing a peace process to reconcile these estranged nations with confidence-building measures and promotion of dialogue.

As 2017 comes to an end, the West Asian scenario for next year looks bleak, with the prospect of further escalation of intra-regional conflicts. A peace process led by Russia and backed by Iran and Turkey is now underway in Syria. This process, at the end of seven years of destructive conflict, will largely restore the status quo: Bashar al Assad will remain in power and will control most of the country, Iran will remain an influential presence, and Russia will retain its bases, with its strategic profile significantly enhanced.

The situation in Yemen is similarly grim. The coalition led by Saudi Arabia has not been able to neutralise the Houthi insurrection or even capture the major towns of Sanaa, Taiz and Hodeidah. The restoration of the “legitimate” government of Abd Rabbo Mansour Hadi, in whose name the war was initiated, remains a remote prospect.

The attempt of Saudi Arabia and the UAE to weaken the Houthi forces by detaching former president Ali Abdullah Saleh from them has cost the former leader his life. The raging conflict has also caused state failure, opening the doors to the proliferation of extremist elements, both Al Qaeda and the ISIS, and the corrosion of national integrity by secessionist forces in the south.

The situation in Iraq, the third theatre of regional conflict, has improved with the defeat of ISIS at Mosul. Iraq did face a serious threat to its unity from the Kurds led by Masoud Barzani, when he organised a referendum on independence on September 25, that he won handsomely, in the face of near-universal opprobrium. But, he overplayed his hand by seeking control over oil-rich Kirkuk. Iraqi forces, particularly the largely Shia Popular Mobilisation Units, besieged the town and forced the evacuation of Kurdish forces without any fighting.

The primary effort of the Iraqi government over the next year will be to strengthen national integrity so that Iraqis of different faiths, sects and ethnicity unite to promote the interests of their nation. This will be a daunting challenge since Iraq will not easily be able to heal its fault-lines which have been deepened by external interventions and internal conflicts over the last 25 years.

Both Saudi Arabia and Iran can be expected to compete for influence in Iraq, one playing on its Arab identity and the other pandering to its sectarian affiliation, and backing parties and movements sponsored by them, so that national divisions will get sharper.

At the heart of the ongoing regional conflicts is the Saudi-Iran competition for regional leadership and influence. Saudi Arabia views the doctrinal, political and strategic challenge from the Islamic Republic as an “existential threat” and is willing to use every resource available to it to confront Iran in the areas of its influence. This rivalry has now become a full-blown sectarian confrontation between the Islamic giants, heightened by the regular recalling of doctrinal differences and historical grievances.

At present, no country or group is pursuing a peace process to reconcile these estranged nations with confidence-building measures and promotion of dialogue. The regional scenario has worsened with the deep animosity for Iran that is being displayed by the Trump administration and the full backing it has extended to Saudi Arabia. Trump’s support has encouraged the crown prince of Saudi Arabia, Mohammed bin Salman, to acquire full political, military and economic powers, even as he has jeopardised royal family unity by abandoning consultation and consensus-building among senior royals, and has even detained several important princes on charges of corruption.

Trump’s backing has also encouraged the Saudi prince to impose an unprecedented political and economic blockade on fellow GCC member, Qatar, to protest the latter’s positions that called for dialogue with Iran and appeared to back Muslim Brotherhood-affiliated groups in the region. This blockade has brought neighbouring powers, Iran and Turkey, to Qatar’s assistance, thus putting in place a new regional alliance that marks the end of the GCC as a cohesive entity as also the nascent Saudi-led Sunni “Islamic Military Alliance” directed against Iran.

The coming months will reveal whether the Saudis accept the crown prince as a much-needed radical reformer who will modernise his nation, or a power-hungry prince who has violated all the norms that have kept his family in power over the last century, has got his country embroiled in unwinnable conflicts, and now is threatening a major conflagration against Iran. The latter is the more likely prospect.

Trump’s announcement that the US has recognised Jerusalem as Israel’s capital has further complicated the regional situation. There is now the prospect of a new uprising by the Palestinians, the encouragement to jihadi elements to carry out “lone-wolf” attacks against western targets, and popular unhappiness in countries allied to the US, such as Saudi Arabia, the UAE and Egypt, about their leaders’ policies.

While some commentators feel Trump could still deliver a peace deal acceptable to both Israel and the Palestinians, most are sceptical. They believe that what is likely to emerge from the Trump initiative would be, as commentator Ragheda Dergham says, an “incomplete peace deal” based on a “non-contiguous, fragmented, demilitarised Palestinian mini-state, with limited sovereignty and temporary borders”. This would have the support of Israel and the Saudi-led “Sunni” bloc that is allied with Trump.

This offer of “Bantustans” to the Palestinians instead of a viable sovereign state will enhance the standing of Russia, given that its leader, Vladimir Putin is viewed across West Asia as one who stands by his friends and who delivers on what he has promised.

In the absence of a region-wide peace process, the possibility of a large-scale war cannot be ruled out. This could involve an Israeli attack on Lebanon to neutralise the Hezbollah and an all-out Saudi assault on the Houthis in Yemen. This would lead to a direct conflict between the kingdom and the Islamic Republic, which would be more destructive than the ongoing wars, and ultimately just as futile.