How to tame a dragon... the many complicated ways

Nitin Pai
Nitin Pai is director of the Takshashila Institution, an independent centre for research and education in Public Policy.

Indian foreign policy over the next few years will have to factor in China in almost every sphere, domain or part of the world. 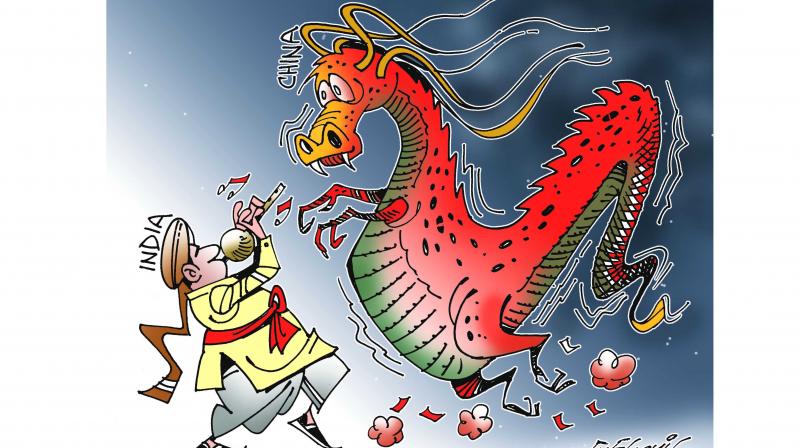 Under Xi Jinping’s leadership, Beijing and the Communist Party of China are going over the top to project everything China as larger-than-life, deliberately seeking to create awe of the Middle Kingdom.

Until the turn of the century, Indian foreign policy found itself frustratingly unable to rid itself of the connection with Pakistan — New Delhi’s diplomacy was almost straight-jacketed by the complications of its relationship with its western neighbour. India’s position over Jammu & Kashmir had to be defended, the world had to be persuaded about the threat from Islamist militant groups, attempts to cast the subcontinent as a “nuclear flashpoint” had to be countered.

Then in the early years of the first decade of the new millennium, the hyphen that haunted India’s foreign policy began to melt away. July 18th, 2005,  the date the joint statement creating the framework for the India-US nuclear deal can perhaps be considered as the date the hyphen was removed — hopefully forever, but surely, for the time being. For that was the day, that it became possible to imagine a new Indian foreign policy—one that could pursue the national interest of sustained economic growth and human development without being distracted to death by the suicidal shenanigans of the next door neighbour. That’s perhaps what a truly “independent” foreign policy would be.

However, that was not to be for long. By 2006, China began to harden its positions with respect to India-China border dispute, even as East Asian countries began to realise that the veneer of its “peaceful rise” was beginning to peel off. After the 2007 global economic crisis and the 2008 Beijing Olympics, the world was no longer in doubt that China’s geo-economic and geopolitical ascendence will not be as easy as the West preferred to believe, in the heady days of the 1990s. The small and medium powers in the Indo-Pacific were faced with a choice of whether to resist the Chinese hegemony or join in. They looked towards the United States and India to see if these major powers could — and would be interested in — balancing China. For its part, a post-Bush, post-crisis United States looked towards India as among the partners that could help deal with the rise of China.

By the time the Narendra Modi government assumed office, China had already become a prism through which Indian foreign policy needed to be conceived and implemented. There were increasing tensions in the bilateral relationship amid increasing economic engagement; countries of the subcontinent were opening doors to Beijing in order to balance India; Pakistan had latched onto Beijing as its primary sponsor; many East Asian economies welcomed Indian engagement east of the Malacca straits to balance increasingly brazen Chinese assertiveness; and the United States saw India as a crucial part of its own contest with its strategic challenger.

This is very much as the world stands today. We have our own reasons to be preoccupied with China; and other countries want us to be preoccupied with China for their own reasons. Indian foreign policy over the next few years will have to factor in China in almost every sphere, domain or part of the world. There are two ways the China factor could influence what we do: it could either cast a shadow on our thought and action, or it could act as a reference point for our own journey. If we are careful, confident and a little courageous we can avoid the former, and instead turn the “hyphen” with China into an unprecedented opportunity to accelerate our economic growth and development.

First, our policymakers and strategists should neither be in awe nor in disdain of China. Under Xi Jinping’s leadership, Beijing and the Communist Party of China are going over the top to project everything China as larger-than-life, deliberately seeking to create awe of the Middle Kingdom. China’s achievements are no doubt impressive, but strategists should know the difference between being impressed and being awed. Similarly, disdain for China — arising either for contempt for its non-democratic political system or the vulnerabilities of its economic model — is unwarranted.

Second, New Delhi should not fall for the China bogey. Many countries in the neighbourhood have acquired the China card which they will gleefully play against India. “China is already giving us this, what do you have to offer?” “Don’t think you can lecture us, because we have a new, powerful friend!” “If you don’t do this, China will grab the opportunity instead.” “China is taking over the whole country.”

New Delhi should be careful not to blink. So China is building CPEC and massively involved in Gwadar port? Well, let’s see how Pakistanis, especially the Baloch, deal with Chinese workers, colleagues, bosses, shopkeepers and security personnel in their midst. New Delhi should remain silent on the Rohingya issue because otherwise China will dominate Myanmar? Well, let’s not forget Myanmarese nationalism will resist Chinese influence as much as the Indian.

Third, it is possible to cooperate with China for mutual benefit without signing up to the Chinese government’s initiatives and pet projects. The people in Beijing are astute enough to realise that spending a trillion dollars to build railway lines to nowhere through nowhere, ports in economically unviable locations or infrastructure in poor, distant countries is tremendously risky, regardless of purported geopolitical benefits. To the extent that the accumulated sovereign and private wealth in China needs to generate returns, they cannot ignore or undermine India. And because of this economic dimension, Chinese foreign policy cannot be completely hostile to us.

With this mindset, Indian foreign policy finds itself with a lot more opportunities, lot more room to manoeuvre, and a lot more freedom to demonstrate the values of the Indian republic. Without this mindset, there is a risk that the China factor will hamstring our diplomacy, where every issue is dealt with with one eye nervously looking over the shoulder at Beijing. The former, in my view, is more desirable.