Can’t choose your neighbour, but... why talk!

If after 70 years, Indians still haven’t got it that words of Pakistanis have no meaning, actions do then India is doomed. 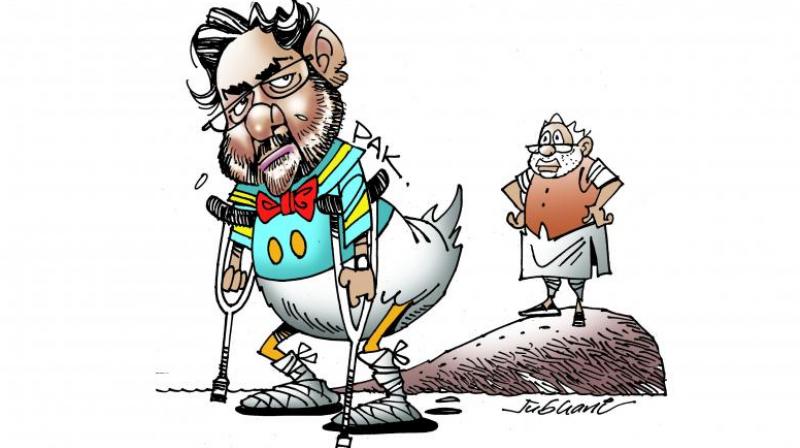 There will of course be all sorts of characters and Pakistani lobbyists exhorting him to roll the dice again with Pakistan, but this would be tempting fate and worse before the 2019 polls.

Except for a Black Swan event, relations between India and Pakistan are going to remain in a deep freeze in 2018, and perhaps even beyond. There are broadly three reasons for such a dreary prognosis. The first is that domestic politics in both countries will militate against any thaw in relations. Second, there is absolutely no sign of any change either in policy or practice, not in India and even less in Pakistan, which would evoke any optimism of trying to restore a modicum of normalcy in the bilateral relations. Third, if anything, relations have gone even further south in 2017 and hostility, bitterness, anger and distrust, have risen exponentially with terrorists being pushed in, violence being engineered and instigated, propaganda machinery working overtime to demonise India and skirmishes and ceasefire violations along the International Border and Line of Control in Kashmir — it’s a long list.

With the general elections scheduled for August 2018, Pakistan is already in an election mode. The civilian government is virtually a lame duck, even more so after the ‘judicial coup’ that ousted Nawaz Sharif. The new incumbent, Shahid Khaqan Abbasi, might be a Nawaz loyalist but he is also a quintessential politician who will never defy the line set by the military establishment. He has neither the political capital, nor the political guts, to take a bold initiative with India, or even to reciprocate to one taken by India. Given the widespread perception (which, as the cliché goes, is more relevant and powerful than reality) one of the reasons for the civil-military tension and probably the cause for Nawaz Sharif disqualification was that he was seen as being soft on India. After what happened to Nawaz Sharif, there is going to be very little appetite in Pakistani politicians for any reaching out to India.

Nawaz Sharif’s political detractors, including from the so-called liberal, ‘secular’ and mainstream parties like PPP and PTI, would portray him as Modi’s yaar (friend) and therefore Pakistan’s gaddar (traitor) — so much for the oft repeated lies that India isn’t a political issue in Pakistan. That apart from sweet nothings and self-serving ‘peace’ proposals, Nawaz Sharif did not do one thing to break the logjam with India — in fact, even when some important initiative on trade, terrorism investigation or political talks was taken, he would chicken out under pressure of the military and the media embedded in the ‘deep state’. Despite Nawaz’s pusillanimity, the military saw his professed desire for good relations with India as a danger and threat to Pakistan. Having made an example of a man as popular and, in some ways as powerful, as Nawaz Sharif, the ‘deep state’ has ensured that for the foreseeable future no elected leader will try to bite the India bullet, even less so with elections so near.

Under these circumstances, expecting the civilian dispensation in Pakistan to take any bold step with India requires a leap of faith. In any case, given that S.K. Abbasi is a lame duck, even the most vacuous Indian politician knows the worthlessness of engaging such a government. By the time the new government takes office in Islamabad, India will be slipping into the mode of a mini-general election in three crucial states. Once those are out of the way, the 2019 general elections will be looming large. Conventional wisdom suggests, therefore, that kick-starting yet another dialogue won’t be possible before mid-2019, if at all.

There could be the odd routine meeting at the official level, or as reports suggest, even a back channel kept open between the respective NSAs of the two countries. Chances are that this will be merely to keep lines of communication open in order to prevent matters from spiralling out of control, rather than for exploring some sort of deal. Of course, if the sort of stuff the Pakistani NSA has been saying publicly is anything to go by, this back-channel will prove infructuous. In the meantime, there is a lot that could go wrong. Pakistanis have re-started the jihad factory for export of terror into India. This will make any outreach extremely hazardous politically. It was with some difficulty and lots of luck that Prime Minister Narendra Modi managed to extricate himself from his previous gambles with Pakistan before they became fiascos. There will of course be all sorts of characters and Pakistani lobbyists exhorting him to roll the dice again with Pakistan, but this would be tempting fate and worse before the 2019 polls.

The apologists for Pakistan in India have been tom-toming the recent statement of the Pakistan Army chief Gen Qamar Bajwa promising to support the efforts of the political leadership to improve relations with India. Frankly, this statement is not just laughable, it is a dripping with insincerity and is a classic example of the forked tongue of the Pakistani ‘deep state’. Anyone who thinks that the army will play subservient to civilians on India or that the army has turned a new leaf on India needs serious help. Simply put, it would be utter stupidity, which would of course be entirely in keeping with those Indians for whom playing peace-peace with Pakistan has become a hobby, to make policy or take an initiative merely on the basis of something that the Pakistan army chief has said. Did anyone really expect him to say that the army will not let the de jure government to make policy on India? If anything, he was throwing a dare at the civilians and rubbing it in, especially after what happened to Nawaz Sharif. If after 70 years, Indians still haven’t got it that words of Pakistanis have no meaning, actions do (and these are all inimical), then India is doomed.

Asides of falling prey to the bad advice of ‘useful idiots’, who perhaps unwittingly peddle the line of the implacable Pakistani ‘deep state’, the only other reason for re-engaging Pakistan could be US pressure to keep things from boiling over. There have been public suggestions from top levels of the US administration about wanting to keep tensions in South Asia from boiling over. But political compulsions and ground realities, especially the unremitting hostility from Pakistan, will inherently circumscribe the prospects of any breakthrough. Therefore, don’t expect anything much on the Indo-Pak front in 2018.