Makarand R Paranjape
The writer is poet and an author, and a professor at the Jawaharlal Nehru University

The fact is that a Hindu majoritarian India may not be as bad as it is made out to be by its detractors. 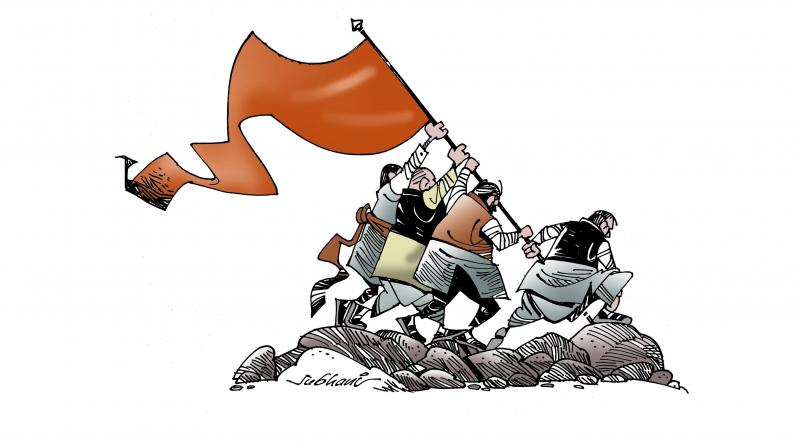 Hinduism, or dharma nationalism, may actually be a better guarantor of Indian pluralism than pseudo-secularism.

Another India? The simple answer is, yes. Or, at any rate, the emergence of another India is not at all unlikely; in fact, there are signs aplenty of its advent.

What is more debatable is what its exact ingredients or outlines might be. Even those who are supposedly in charge of the new narrative aren’t sure. At the crux of all these debates is one word: Hindu. And its varieties—Hinduism, Hindutva, Hindu nationalism, Hindu majoritariansim, and so on.

For many, especially those who were perpetrators of the older dominant, “secularist” plot, the rise of this new India spells doom, the end of the project that Gandhi-Nehru lead, and the Congress headed mostly by Nehru’s heirs brought to the present pass. Perhaps, they are right. It is the end of that kind of India, and of that kind of elite. Naturally, such people are unhappy; displaced privilege usually produces outrage if not predictions of doomsday.

But we must examine the situation on its merits. The prospect of this new Hindu majoritarian India, has got a terribly hostile press. So much so that it seems as if there is a combined opposition media party, utterly hell-bent on demonising Hindu India and its protagonists. So inveterate is the antagonism displayed by this faction that sometimes it resembles visceral hatred, while at other pathetic self-delusion.

Clutching at straws, seizing upon a Kanhaiya Kumar, Hardik Patel, or Jignesh Mevani as the youth icon, even avatar, to stop the BJP juggernaut in its tracks, this decimated opposition seems to be praying for nothing short of a miraculous slaying, metaphorically speaking, of the rakshasa called Narendra Modi.

Funnily, this lot might never use such a Hindu metaphor in the first place. The modern sector is, perforce, doomed to express its outrage in a modern idiom. When they resort to tradition they end up making fools of themselves, wearing their janeu on their sleeve, so to speak.

But all that is politics. Let’s leave it behind as we approach the end of year, even if by the Gregorian calendar. We Hindus follow multiple calendars, perhaps using each to our advantage. Why should we give up this opportunity to introspect, even meditate, over the future of our beloved country?

The fact is that a Hindu majoritarian India may not be as bad as it is made out to be by its detractors. In fact, it may actually be a better, more wholesome, integrated, and compassionate India than the present state, that is so riven by uncivil strife. Hinduism, or dharma nationalism, may actually be a better guarantor of Indian pluralism than pseudo-secularism. If we are unprejudiced, fair-minded, and truly liberal, we should be willing to give the other side, especially when it is elected by an overwhelming majority, a fair chance rather than excoriating it before its commencement so as never to let it come into being.

But in doing so, we shall fall prey to many fallacies, including considering a majoritarian nation and polity as the inherent opposite of liberalism and multiculturalism. Even in the latter, one element dominates, whether in the metaphor of melting pot, salad bowl, or mosaic. In liberal Western democracies, the dominant element is a combination of modernity and democracy, underwritten not only be science and technology, but by the culture of capitalism and consumerism. That a religious element, mostly Christian in the case of Europe, North America, and the Antipodes, endorses the national consensus is almost a given. Then why shouldn’t the Hindu cultural bedrock that informs the Indian consensus work as well as the Confucian or Shinto accord in modern China or Japan?

True, this Hindu element should not thrust itself in everyone’s face or enforce its norms coercively. It should be the broadest, most open, most compassionate kind of Hindu unity. At the same time we must recognize where its most virulent opposition comes from. Not from other religious or ethnic minorities, but from the Hindu secularist elite, which does not wish to yield power.

In other words, the problem with India at present is a life-and-death struggle between two elites, the erstwhile dominant secularist and the emergent Hindutva brigade. Who will win remains uncertain, though as of now, the latter seems ascendant. In the end, like all tussles for power, this one too may be more inconclusive than what appears right now.

The cultural rule of the interpenetration of opposites predicts that the new order may not be radically different from the old. Of course, it would be rather disappointing if it were not at least slightly better — more confident, capable, competent, prosperous, creative, and egalitarian.

For that to happen, however, we must all join hands to contribute our mite rather than being cynical nay-sayers and Hindu-haters.