I am socially awkward, not a great talker: Prabhas

But despite his onscreen heroism, Prabhas is quite the reticent man in real life, or that’s what one gathers from interactions with him. 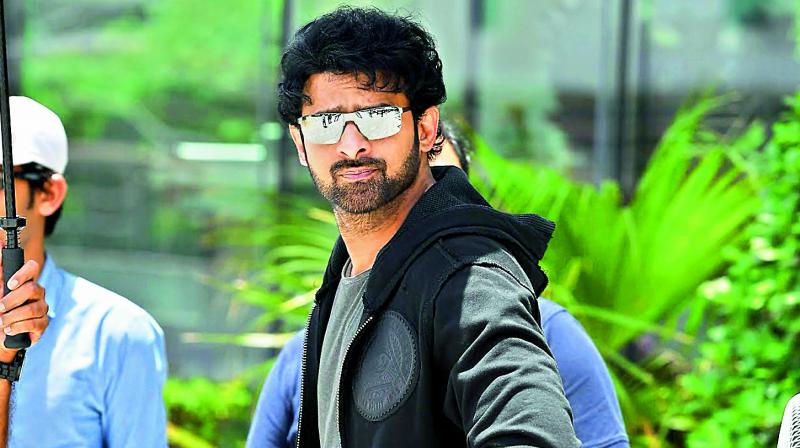 The reclusive Prabhas opens up just enough for us to understand him a little better, as he talks about what he wants from life, his career, and the person he is off-screen.

Prabhas, an actor to reckon with in the South, shot into the consciousness of Hindi film viewers with his stellar performance in S. S. Rajamouli’s Baahubali: The Beginning. His courageous, six pack-bearing Mahendra Baahubali kept us at the edge of our seats and we were more than happy to see him once again in the movie’s sequel. Now, he’s back to enthrall filmgoers with his next, Saaho, in which he is set to play a larger-than-life hero, yet again.

But despite his onscreen heroism, Prabhas is quite the reticent man in real life, or that’s what one gathers from interactions with him. He’s been described as being shy and reserved by the media, but the actor is slowly but surely stepping out of his shell. In this chat, we see a more candid side of him, as he lets us in on acting challenges he encounters, his relationship status and lots more.

Baahubali left a strong impact on the audience. Have you been able to shrug off that ‘Baahubali image’ and move on to new projects?
Yes, the Baahubali effect is still there. I don’t want Baahubali to leave me because it is amazing to see the love that I have received. Rajamouli made this film and I don’t want people to forget about it ever. For my team, and me, we can’t get a bigger script than Baahubali; and if we did, there will be immense pressure.

In a climate where realistic cinema is quickly becoming a hot favourite, how challenging is it to pull off convincing larger-than-life characters?
As an actor, when I play larger-than-life characters, I can sense when I am going overboard and when I need to tone it down. I know the audience is opting to view realistic films like Kabir Singh, which was earlier made in Telugu.  But whatever said and done, people still go and watch Avengers. There are different kinds of films being made. French films are all realistic films but how many of them do we watch? We all need variety and look for entertainment.  If we only make realistic films, the audience will really get bored. So, there needs to be a mix of things.

After the characters you’ve portrayed, do you think the audience will accept you in the role of a common man?
I want to play a common man, and that’s exciting for me. As an actor, you should be able to pull off all kinds of roles. Just because you do larger-than-life roles back-to-back doesn’t mean you can’t play a common man on screen. I did an action film called Chatrapathi with S.S. Rajamouli after which I got bored with action. So I waited for four years and then did a simple love story. In my next film, there is no action at all. You may see visual action, but it’s a love story.

Though you have a huge fan following, you come across as being a shy person. What is the real-life Prabhas like?
I am not Baahubali in real life. I am more of a family person and like to be with my close friends and family. I am not a party person at all. I am socially awkward and that’s why I was not on Twitter; I can’t handle it. I am a shy person and my directors also know that I am not a great talker. I am opening up now, after so many interviews. I think I am getting better.

In Bollywood, the big names wet their beaks in the film’s profits. Does the profit-sharing model appeal to you too?
In my case, people give me what I ask for, but I don’t take it all. The production house is already spending so much on high-budget films, so I just take 20 per cent of my share. I’d rather focus on my craft as an actor and not money.

Coming to your personal life, rumour has it that you’re in a relationship with your Baahubali co-star, Anushka Shetty. The rumour isn’t dying down, so, is there any truth to it?
If I work with Shraddha for another two years, and we both remain unmarried, I’ll get linked with Shraddha as well. Anushka and I have been friends for 11 years. We knew we’d face these linkup stories, and we were prepared, but strangely, these stories aren’t stopping at all. If there was anything, why would I hide it? And why would she? I think until either of us gets married, these rumours won’t stop.

Are you inclined towards politics?
My uncle has been a politician for 17 years. When he was vying to be an MP, I went to the villages with him to campaign, so I’m acquainted with it. But it is not for me; I don’t enjoy it. I am a very different person, a simple man. I am not used to this filmy life itself, as I am a very private person.

You seem to be a tough competition to Salman Khan?
We have grown watching Salman Khan’s films. My mother is his huge fan and watches all his films. Even my grandfather has watched Maine Pyaar Kiya innumerable times. I too love his (Salman’s) work and have watched all his films. Being his fan, I can never give him competition. He is an inspiration to a lot of actors.

Are you a romantic person?
I used to never strike up  a conversation with a woman, as I was very shy.  I am more comfortable now though I am sure it will take more time.  It was also difficult to romance as I was shy.  I am comfortable romancing in studios but not on roads. I was doing a love story in Telugu where Pooja Hegde was cast opposite me. We shot a scene on a road in Hyderabad where she was supposed to run and hug me.  After the take, the director called me in the room and sweetly told me ‘you are not holding her properly. The romantic scene seems cold.’ I have improved now,  and am not that shy.