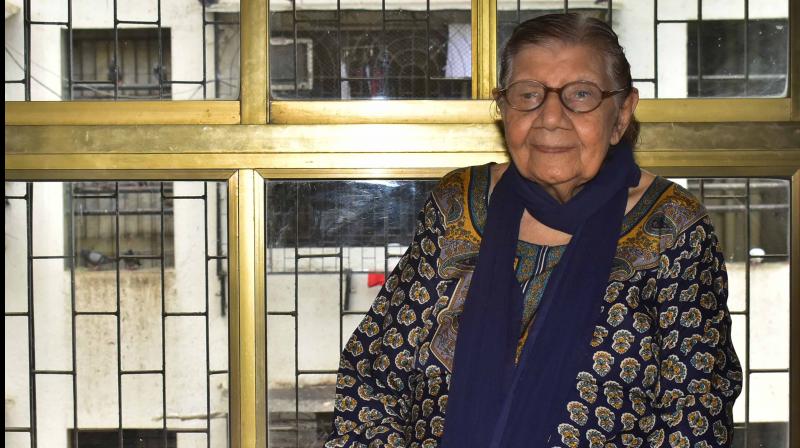 Rama Mehta (Khandwala) at her residence in Mumbai

‘Britain shall always rule the waves’  this popular refrain at a Christian school in Burma’s Rangoon now known as Myanmar and Yangon respectively would stay with teenage Rama Mehta (Khandwala) like a battle scar. While she was unable to do much as a young girl, as an adult she would use the phrase as motivation to fight for India’s Independence from the British.

While Indian soldiers were fighting in World War II as a part of the British Army, people in Burma, Singapore and Malaysia were gathering to form an army that could fight against the British rule in India. Netaji Subhas Chandra Bose, the face of Azad Hind Fauj (Indian National Army, INA), said in a famous speech: ‘Tum mujhe khoon do, mein tumhe azadi dunga (give me blood and I will give you freedom)’ inspired a 16-year-old Mehta to join INA in 1942 to to aide in Indian fight against British colonisation.

“After listening to Netaji’s speeches, I was filled with nationalism and confidence and I joined INA,” says the now-94-year-old as she welcomes us into her Mumbai based home, where she lives alone and spends her day reading books and teaching Japanese to two of her students.

Back in the days, she was the Second Lieutenant, Platoon Commander, and a Guard of Honour in the Azad Hind Fauj. She is also the oldest tourist guide of government of India to receive the Best Tourist Guide award by President of India Ram Nath Kovind in 2017.

The era of queens

Born in an affluent family in 1926, Mehta joined the INA’s Rani Jhansi Regiment as a sepoy, at the age of 17 with her sister Neelam. She was put into the Rani Jhansi regiment by her mother Major Leelavati Mehta, who was the recruiting officer of training in INA and was a part of the Indian Freedom Movement for several years.

“There were more than 1,000 queens (as Netaji would call them) in the regiment recruited from Malaysia, Bangkok and Singapore to fight for India’s Independence. They all assembled in Rangoon for the Chalo Dilli Movement,” she recalls.

Headed by Dr Laxmi Sehgal, Mehta underwent rigorous training for around eight months and was trained to use stun guns, machine guns, rifles, and other war weapons. She also underwent nursing training to treat soldiers on the frontlines.

“I used to cry a lot. I had never seen that life before. I had all the comforts of the world as a child. Waking up early and participating in marches was not easy,” she shares, further recounting that she later made friends with other women soldiers, and she was the first among other women officers to join Indian soldiers at the frontline.

“I would never get time to eat, even; there would be wounded soldiers all the time. There was constant bombing at the frontline and you just have to run to safe places,” she adds.

‘People don't know what war is’

As a soldier, Mehta at a very young age had suffered the deepest wounds and scars of war. Initially, women in the INA never went on frontlines, but the women in Rani Jhansi Regiment would pester Netaji to send them on the battlefields.

“We wanted to serve the nation and be a part of the fight equally. Netaji was concerned for us so didn’t send us in the beginning but then he agreed and I was selected among other few women,” gushes Mehta, who says that while she lived her best days in the INA, wars are torturous.

“People don’t know what war is. We have seen that closely. We have seen people dying every minute. We used to spend hours in trenches,” reminisces the veteran.

She further elucidates that there were attacks by British Army every night and they would usually choose full moon nights.“For years, we hated full moon nights. As soon as we would hear the danger siren, we would run to our trenches and stay there till we hear cleaning sirens,” she shares.

Although the former soldier has several painful memories, she also has a fond recollection of her meeting with Netaji. In the seven-acre camp where Mehta was stationed, she was allotted the post of a sentry guarding the camp.

“I was strolling around the camp at night with a rifle on my shoulder and I slipped. I was injured and hospitalised in a military hospital. Netaji came to meet me and I started crying. He said ‘The war has not started yet. You will be there on the frontline, and if you cry like this then how will you fight? Be bold and brave. Think about attaining India’s freedom.’ These words motivated me and I just forgot my pain,” she recalls with a smile.

A high price to pay

From the (approximately) 75,000 soldiers were fighting for Indian’s independence, over 30,000 soldiers lost their lives. Many soldiers were kept in prison and tortured to death, while women were harassed and tormented after INA lost the war in 1945. Mehta, her mother, and sister were on house arrest for over six months.

“We didn’t see the outside world; the British army was spying on us. It was so uncomfortable. When a British soldier asked me that why I joined INA, I boldly told them that I want the Independence of India,” she states, adding that once she came back to India in 1946, she stayed with her family in Mumbai and later was given an opportunity to join politics via the Congress party by Sardar Vallabhbhai Patel.

“I declined. I didn’t want to join politics but wanted to serve the country, and I became a tourist guide with the government of India,” she reveals.

It has been over seven decades since India successfully got her independence, but the INA veteran, clad in a simple blue salwar-kameez, still sits alone sometimes and thinks about the days in INA. She cries when she thinks of Netaji.

“I cried when I heard the first speech of Jawaharlal Nehru after India got the Independence. Netaji wanted this in his entire life and he wasn’t there to see that. The unfortunate part is that Nehru, Patel, and Mahatma Gandhi never gave recognition to Netaji. That was sad. We didn’t get the freedom because of Gandhi or Nehru but majorly because of Subhas Chandra Bose’s army,” she asserts before signing off.