Meet the Ultimate myth breaker From brewing to biologics, Biocon’s Kiran Mazumdar-Shaw has brought about a massive change in global health. 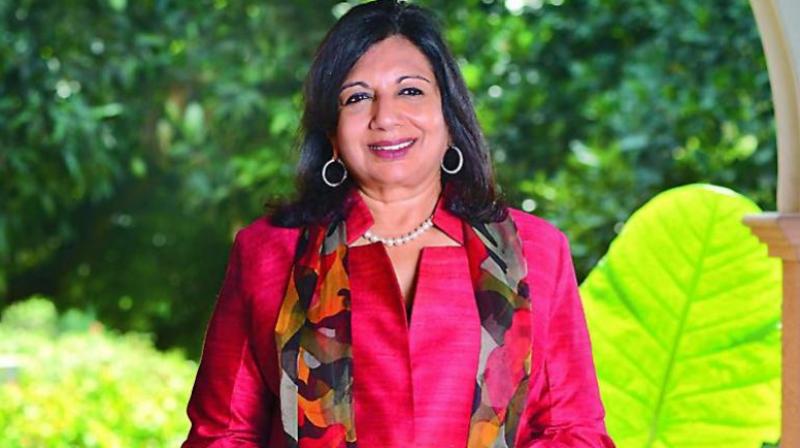 When she talks, people sit up and take notice. Recently when Biocon CMD Kiran Mazumdar-Shaw made a critical comment about Finance Minister announcing the ban on e-cigarettes, Nirmala Sitharaman chose to clarify in a three-part tweet. Very soon when Sitharaman announced corporate tax cut, Shaw was among the first set of business leaders to hail the decision.

Shaw never minces her words. She also does not hesitate to pat someone on the back for a good thing. The self-made richest woman and one among the world’s top 100 influential people and 100 powerful businesswomen has carved herself a position in the public space.

Her biographer Seema Singh rightly describes her as a ‘myth-breaker’. “She has managed to break the kind of myths that abound in the Indian scenario – a tech start-up seeded nearly four decades ago in life sciences and not information or communication technology, by a woman who was not an engineer and who did not come from a business family”, Singh says in Shaw’s biography.

While she managed to break the myth, it was an arduous task for a young woman in the 1970s. She always believed in setting her own rules. No wonder, she chose to build a career in brewing which still remains a male bastion.

When Leslie Auchincloss, the founder of Ireland-based Biocon Biochemicals was looking for a “person of passion” to launch his company in India in mid-70s, Shaw’s name came up through an acquaintance who was convinced about her passion for studies during her brewing course in University of Ballaret, Australia. After meeting her, Auchincloss had reportedly described Shaw as “a fantastic, enthusiastic, ass-kicking woman who is aggressive, demanding, and would make a great partner for Biocon.’

It was her sole decision to give up a safe overseas job offer to start an uncertain entrepreneurial journey without a family background, experience and financial wherewithal. After the exit of IBM and Coco Cola, the climate in India was hostile for multi-national companies. She formed a 70:30 joint venture with Biocon Ireland and started off her garage lab with a capital of Rs 10,000. “I really believe that entrepreneurship is about being able to face failure, manage failure and succeed after failing,” she says.

The battles were many – fighting the bureaucracy to get each paper moved from one desk to another, getting bank finance for a not-so-familiar biotechnology venture, convincing people to join her firm and most importantly fighting against the societal prejudices about the entrepreneurial capabilities of a young woman of 25.

She managed to get two retired hands to work for her and started off with two products – papain and isinglass – which she exported to the parent entity in Ireland. Within a year in 1979, Biocon India started exported enzymes to the US and Europe. For the next few years, it continued producing and supplying enzymes to diverse industries like food and beverages, animal feed, textiles, pulp and paper and leather across the globe.

Meanwhile, in 1989, the parent entity, Biocon Biochemicals was acquired by Unilever. Unperturbed, Biocon India continued to grow its business by expanding its in-house research and manufacturing capabilities and in 1994 it established Syngene International a Custom research Company.

By the second half of 1990s, Biocon had become India’s leading enzymes company, but Shaw found that the business had limited scope for expansion and growth. Biocon decided to enter the larger space of biopharmaceuticals. Shaw wanted to use her knowledge in biotechnology to develop biopharmaceuticals or biologics, which are largely developed from tissues, cells and proteins of living organisms. Using the proprietary fermentation technology, Biocon decided to disrupt the market with affordable biosimilars or generics of biologics.

As Unilever did not want its acquired entity to enter into biopharmaceuticals, Shaw had to buyout the company. Kiran’s husband John Shaw had to sell his house in Chelsea to buy Unilever’s stake in Biocon. Thus Biocon became an independent entity. Shaw always acknowledges the role played by her father and husband in her life and business. If her father encouraged her to take the road less traversed, her husband supported her in the venture.

“When I first met Kiran I was struck by her passion and determination and instinctively felt that she would succeed in whatever she set about to do. But what she was able to achieve over the next three decades was truly amazing,” says Narayanan Vaghul, former chairman of the Board of ICICI.

Shaw has set a target to make Biocon the largest biopharmaceutical company in the world. “Biocon is on a journey of making impact on global healthcare. I have to make sure that I have one in five persons who needs insulin therapy to use a Biocon product — that is my dream,” Shaw says.