An epidemic of affluenza

The story revolves around infidelity, something that she has noticed is on the rise in India. 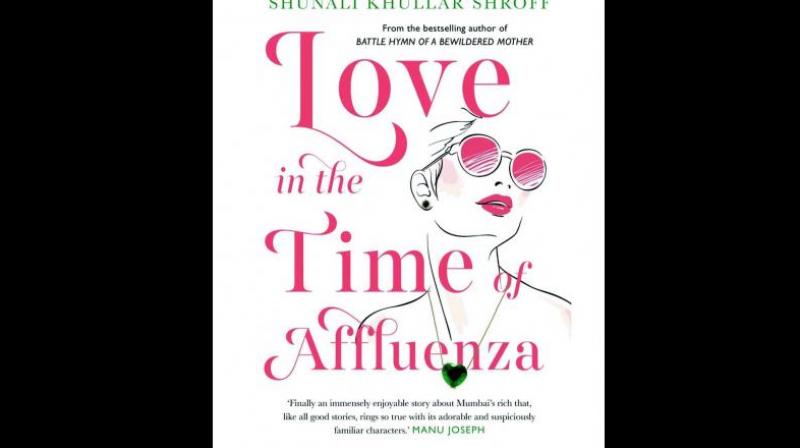 Mumbai-based writer Shunali Khullar Shroff may not quite be afflicted with Affluenza, but she’s been surrounded by so many sufferers of this affliction that she can spot the symptoms straight away. “Affluenza is a natural progression for a society that has only just experienced a rise in personal fortunes. In India, this has happened over the past two decades. The arriviste always wants acceptance in what they perceive as high society and in them symptoms of affluenza are more apparent and severe,” she observes, adding wryly though, that they often don’t realise that “the problem with a life of privilege is that it is ultimately a bubble”. According to Shunali, “Affluenza isn’t as fabulous as it looks on the outside. It isn’t exactly paradise because it leaves you with enough other problems such as a gaping void, an existential crisis, anxieties about maintaining your wealth and lifestyle and keeping up with the Joneses.”

And we see this manifested in her book, Love in the Time of Affluenza, published by Bloomsbury, quite often. The protagonist, although strong, still struggling to meet the mother-in-law’s approval, the children’s needs, the cook’s capriciousness, while trying to reassert her own lost self. The pressure of planning a party, where just the floral decorations cost as much as a minion’s annual salary but must be ‘just so’ so that the guests are adequately dazzled. The anxiety felt at social gatherings, the shifting loyalties, the casual couplings, the uncertainty about which faction to support when there are differences, the slow unravelling of life as you know it… All of this brewed to perfection and served up with a slice of wicked humour. “I think one can use humour perfectly to convey something serious,” Shunali asserts.

The story revolves around infidelity, something that she has noticed is on the rise in India. “Marriages around me were collapsing. I found people asking themselves hard questions about what they sought from a life partner. Infidelity has been on the rise, this time with women actively participating in what was largely accepted as a male monopoly,” she says, explaining that society is much more judgemental about a woman straying from the marital bed. “For all our talk about women’s emancipation, and individualism, even in the upper echelons of society, I saw a lot of double standards when it came to a woman wanting more from life,” she notes.

She explains how this planted the seed of inspiration for her plot: “Outside of my immediate circle of friends there was another woman who everybody judged harshly for pursuing love outside of the confines of her marriage. This ‘everybody’ included me as well. I learnt from a common friend that she wasn’t the cold, unfeeling vamp most of us had imagined her to be, but someone who just did not put much value on the societal construct of monogamy. And so I set a story in this world of privilege and tried to unravel for the reader the complexities of being a woman, the nuanced lives that we lead where we are mothers, wives, career women but beyond all that, we are human beings just like men with desire, ambitions and conflicts of our own. Women tend to subsume their identities for the greater good of others, especially our children. I wanted to talk about such women, their compulsions and their compunctions and also about the other kind of a woman who doesn’t care for convention.”

So, while it’s a satire that has evocatively captured the emptiness and first-world problems of wealthy women, Love in the Time of Affluenza also delves a bit deeper, giving you pause for thought on a variety of subjects. Her main protagonist Natasha may not be as reactive as her own real-life personality, but Shunali admits that there’s a distinct thread of liberal feminism running through the narrative. “I did want my feminist thinking to come through the book. Art, cinema, literature can play its role in changing people’s mindsets. I did not want to waste this opportunity to talk to women and evolved and confident men who might read my book,” she winks.

The response so far has been overwhelming, irrespective of gender. So enamoured of the writing was American novelist Kevin Kwan, the man behind Crazy Rich Asians, that he put this on social media after reading Shunali’s book, “A captivating novel about a bunch of Crazy Rich South Asians. I devoured this delicious treat within 48 hours, laughed non-stop and it made me want to book a flight non-stop to Mumbai right away. I want a sequel now.” Closer home, director-producer Karan Johar not only loved her book but was also part of her launch, where they discussed the nuances of love in the time of affluenza.

Having hitherto only written articles, blogged (shunalishroff.com) and authored the coming-of-mommy-age non-fiction best-seller titled Battle Hymn of a Bewildered Mother in her own voice, was fiction tough to do? She replies, “It was hard when I started. But I need to set impossible tasks before myself to get motivated and to drag myself out of my comfort zone.” She wrote this book in instalments over a year. Even with the basic idea in place, was fleshing out the fictional characters difficult for her? “No fiction comes entirely from a writer’s imagination. My characters are inspired by people that I know. But they are a composite created from various people. One learns how to cleverly conceal and reveal at the same time. I’m enjoying the guessing game and the fact is that there is more than one person out there who’s thinking - ‘Is she writing about me’? or ‘I think I know who this is about’.” She narrates an incident where a gentleman from Delhi told a friend of hers that he read the book from cover to cover because it was ‘about his friends’. “I do not even know his friends, or about their personal scandals but clearly this sort of stuff is more rampant than we are willing to admit!” laughs the astute author.