Author Ashwin Sanghi is back with yet another thrilling story that revolves around science fiction and history. 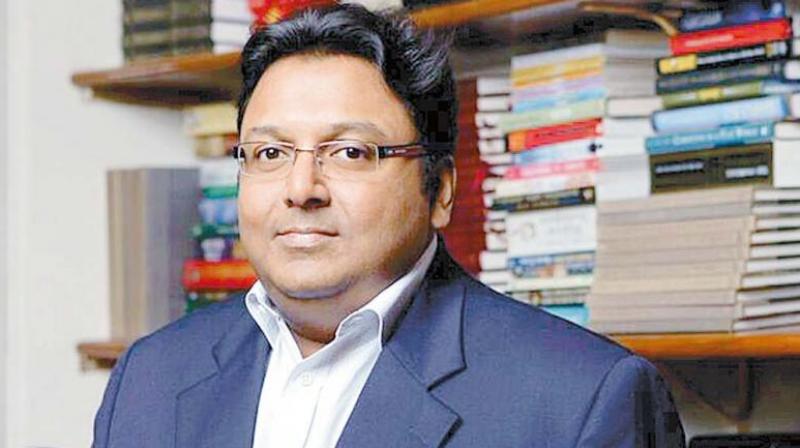 Ashwin Sanghi’s Keepers of the Kalachakra is as explosive as a time bomb ticking in your hand. Every chapter springs an unpredictable surprise. It falls in the realm of science fiction based on historical facts and is set against the backdrop of terrorism. But the author is hesitant to call it fiction. “Possibly. But then you know what, I’m not sure if it’s really “fiction”. Most science fiction eventually proves itself to be truer than we had imagined. But at the present moment, sure, it is science fiction based on history, mythology, religion and current affairs,” he asserts.

Theoretically, the book is heavily inspired by the world of quantum physics and expounds the theory of quantum twins.  To reveal more would be killing the suspense factor in this racy read that takes you on an unbelievable roller coaster ride exploring Islamic, Hindu and Buddhist philosophy even as he objectively highlights the negatives in every religion.  But before we delve deeper into religious history, one can’t help but fantasise about a quantum twin. A concept that is at once both exciting and scary.

“Let me put it this way. The odds of not having a quantum twin somewhere else in the universe are infinitesimally small. We often forget that our sun is just one star among the two hundred to four hundred billion stars in the Milky Way. We also conveniently overlook the fact that the universe consists of two trillion galaxies like the Milky Way. If we were to represent the entire universe as Earth, then Earth itself would proportionally be the size of a billionth of a pinhead. How is it possible that we can even entertain the notion that we are unique or separate?” he counter questions.

The plot is intriguing right from the onset. Random but influential heads of state with ultra liberal views are bumped off in official gatherings.

But there are no assassination attempts. They fall instant prey to a mysterious illness that alarmingly plays itself out in highly secure environs.

Some of the characters are very clearly inspired by real life leaders like the American President and the Canadian PM, even though he may have changed their age and physical features. Is he worried about the ramifications of such creations? Ashwin has a ready answer. “Fiction is always inspired by fact (and sometime fact is inspired by fiction). Sir Arthur Conan Doyle’s Sherlock Holmes was inspired by a real figure of Dr Joseph Bell, Herge’s Tintin was inspired by a Danish teenager called Palle Huld, J.K. Rowling’s Severus Snape was inspired by her chemistry teacher John Nettleship… the list is endless.”

Keepers of the Kalachakra paints an alarming but true picture of high powered individuals employing psychological tactics and blood chilling games in order to protect their individual faiths. The book though written under the realm of fiction touches upon sensitive topics like world conflicts, terrorism, religion and heads of states. We can’t help but wonder whether Ashwin worries about the implications of writing such books in the real world, where even films like Padmaavat are embroiled in controversies and bans. “There is no writer who does not worry about such issues. What I try to do is three things: one, I try to approach the subject with a sense of respect so that it is reflected in my writing; two, I try to research the topic as minutely as I can so that I leave less room for error; three, I try to provide a list of all my sources so that anyone who has an issue with the material can visit or read the original source material,” he explains.

The introduction of the character Masoud at frequent intervals is primarily to debate about existing violence in Islam:  “There are those who say that radical Islamism is something within the doctrine of Islam itself. There are others who say that this terror is actually the consequence of Western interference.”

The passages at periodic points in the book objectively draw attention to the flaws in the Islamic world. But the author also consciously draws the reader’s attention to destructive factors in other religions too: “There are those who say that there are enough passages in other religions that are equally violent as some in the Quran. The Bible and Torah have many passages that talk of storming and killing…”

Why did Ashwin feel the need to clarify that similar flaws have been committed by other religions too? Was he playing safe as an author? “I wanted to drive home the fact that most religions have had a violent element in their past — to a lesser or greater degree. If we cannot acknowledge that, then how is the world to move forward?”

Masoud, one of the protagonists who appears to play the role of a sutradhar (his real identity is revealed at the very end), makes a valid point when he says that Islamic states are unable to separate state from religion. Does the author feel that a similar approach may happen in other countries too, including our own?  “That is always a danger and we must be wary and watchful. Take Turkey, for example, we are steadily seeing it move from secular to Islamic. The answer does not lie in going the opposite way and creating an alternative state based on an alternative religion. It must necessarily lie in the state maintaining its equidistance from all religions,” he asserts.

Masoud’s two-pronged solutions that ask Islamic countries to go after terror havens and exterminate terrorist masterminds and also find ways for moderates to reclaim their religion from hardliners is valid. But one wonders how the book is likely to be perceived in Muslim countries. “I believe it will be appreciated. Most of my friends who are Muslims hold opinions and views that are in line with those presented in the book. The world has changed and educated Muslims around the world are hungering for similar change. Could we have imagined such significant reforms in Saudi Arabia for instance?” he confidently questions.

Keepers of the Kalachakra is both fierce and intense with savage imagery. How long does it take the author to let go after the book has been written? “Once I’m done writing a book, I take off my writer’s hat and put on my marketing hat. Once I plunge myself into marketing, I find that all the residual emotions of the book evaporate rather quickly!” he adds.

The fulcrum of this novel lies in the Kalachakra prophesy that predicts the world will descend into chaos in 2424 due to the conflict between Islam and the rest of the world. We wonder whether this is the reality the world might actually face?  “I don’t think that it will play out. The world understands that any such conflict would be disastrous for the very survival of the human species. Thus, it is incumbent on world powers to ensure that polarisation is reduced and temperatures are cooled,” he says optimistically.

The plot and narrative is gripping and makes you sit on the edge of your seat. It is inevitable to ask Ashwin if any movie producer approached him to buy the rights of his book for a film. “Sure. Currently, The Krishna Key is under development with a major studio. The Sialkot Saga is being scripted by director Hansal Mehta for a series. And Chanakya’s Chant has just been optioned to yet another studio. I believe that The Krishna Key is best suited for a movie because the story pans out within a few days and is easily adapted,” he admits.

This interaction cannot end without asking the clichéd question: Would Ashwin call his immediate family his worst critics or best fans? “Both. My maternal aunt is usually one of the first readers of a manuscript and is ruthless in her observations. The same applies to my wife and my elder brother. But then, every book in the Bharat Series is very different. For example, I do not expect readers who enjoyed The Krishna Key to love The Sialkot Saga. I am too much of a realist for unreasonable expectations,” he confesses.