The British novelist on his latest trip to India, speaks of his love for words, his stardom as a literary figure. 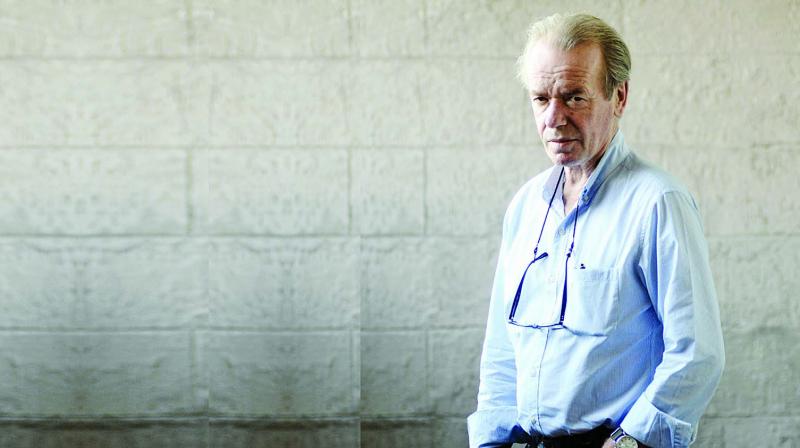 About 35 years ago, British novelist, Martin Amis had made his maiden trip to India to make a documentary on Bollywood for BBC4. He had met Dev Anand. He also remembers meeting “a comic actor called Mehmood, who was very nice”. “We had asked him ‘how famous are you?’ to which he said, ‘come with me’. We then got into an open-top car. He drove us around and thousands of people gathered to see him. So that’s how famous he was,” recollects Amis. On his latest visit at the recently concluded Tata Lit Fest, a lot had changed: Bombay has become Mumbai, his hairline has taken a few bold steps back and he has gone a little easy on his chain-smoking. But above all, his oeuvre has bulked up, substantially.

Martin (a rather controversial figure in the British literary circles) enjoys certain stardom in the world of writers, which he thinks is a manifest of the media. “No writers were well known before 1980s. Things changed due to the expansion of the media; they ran out of every other kind of person of interest — the alcoholic actors, the hysterical fashion models, etc. So they were reduced to writing about writers, which in England they hate,” he says. To further elaborate his argument, he explains, “They (journalists) hate writers more than anyone else on Earth. Because journalists are writers too — journalists are not musicians, or painters — but they are writers so there’s a sort of rivalry. They think novelists are pretentious writers. But that’s in England; it’s different elsewhere.”

Martin himself has had a flourishing career in journalism. He plans to publish a collection of his journalistic works next year. “So, that will make it the fifth book of collected journalism. It’s a lot, really, surprising. I never had thought I had done that much,” he says.

With every new book, Martin has managed to be in the limelight — but often for the wrong reasons. As the son of author Sir Kingsley Amis and stepson of writer, Elizabeth Jane Howard, Amis was acquainted with the many perks and perils of the job at an early age. “Some journalists think that I deliberately say controversial things, I don’t. I just say things and the newspapers take them up. The only way I can avoid it (controversies) is by never saying anything. But that’s not my natural position. The main stuff however is what you are doing in your study and at your desk,” he states.

Martin would often quote Anthony Burgess’ idea of two kinds of writers — the A writers and the B writers. The former is a ‘storyteller’ and the latter is a ‘user of language’. In an old interview for the Paris Review, he had said how he would wish to be considered a ‘B writer’. But today, he laments that the ‘word novel’ is dead. “I don’t think it ever really got going. I mean the most famous B novel is Finnegans Wake by Joyce and Ulysses is slightly towards the B novel. Anthony Burgess himself wrote A Clockwork Orange, which is definitely a B novel. Otherwise it’s dead,” he says adding, “The novel has become more forward momentum in evolutionary response to a speeded up accelerating world. Everything is accelerated and the novel has adapted to that. I don’t see how poetry can adapt to it. So, it’s problematic for literature. But it’s something the novel can adapt to, I mean it has,” he explains.

According to Martin, the British novel is very grateful to the Commonwealth novel, particularly the Indian novel. “It gave the English novel colour,” he states, adding, “The English novel was in a very depressed state. For instance, when Salman Rushdie started, it (British novel) was 225 pages-long,  unadventurous and revolved around middle classes, careers and marriages. And then around that time it picked the influence of novels written in English by other cultures,” he says.

Among other Indian authors, Vikram Seth and Rohinton Mistry were some other authors that he could think of at the drop of his proverbial hat. Although while walking down the stairs, he confessed his love for the classics while he held his e-cigarette in one hand and a copy of Anthony Trollope’s The Prime Minister in the other. “I tend to read the dead. They must be very valuable if they are still being read a century later.”

The late author Kingsley Amis and Martin Amis make for a rare father-son writer duo that has added significantly to English literature. Before Amis senior’s demise, Martin would often show his manuscript to his father. But today he gives it only to his wife, writer Isabel Fonseca before sending it to his agent who then sends it to the publisher. “My father died twenty years ago, (but if he were around now) I certainly would have stopped showing them (manuscripts) to my father,” he says, with a chuckle. If one had to ask for a piece of advice as a writer, Martin would probably first talk about the ‘natural sin of language’, borrowing the phrase from T.S. Eliot and how to avoid it. “I meet phrases like “big time”, and “he went ballistic”. You hear lot of people using these phrases and I think that’s no good, you know, ‘that’s not your phrase’. Congratulations to the person who said it first; that belongs to someone else. That’s for the Donald Trumps of this world,” he says, hinting at his political preferences.

But above all, he says as a first time author, one must “cast away all the worry”. “Reach the end of the first draft and then worry because then at least you’ve something to worry about. Charge on till you finish,” he concludes with a wry smile.